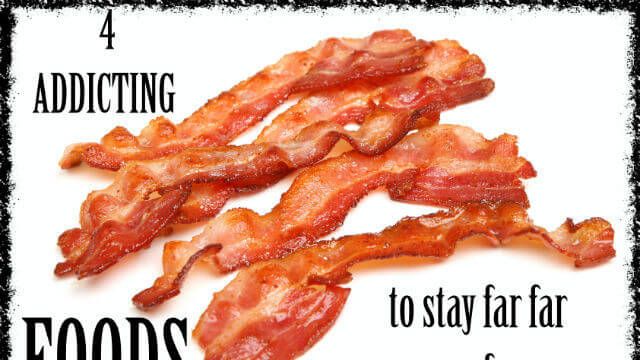 We usually think of junk food as being bad for us because it’s high in calories and low in nutrients – but that’s not the only reason you should avoid highly processed snack foods and fast foods. Many of these foods are also purposefully manufactured to be highly addictive.

In fact, fast food and snack food companies put a lot of time and money into determining what combinations of salt, unhealthy fats, and sugar can make people reach the so-called ‘bliss point’ that keeps people in a constant state of craving.

According to Martha Rosenberg, writing for Alternet and Hungry for Change, these are four of the worst offenders:

It’s true that most sodas contain caffeine and sugar—both highly addictive ingredients. However, the reason half of Americans drink soda daily is not only the sugar and caffeine content. Soda manufacturers test thousands of different flavor combinations before releasing a new flavor, ranking obscure taste factors like ‘gumminess’ and ‘dryness.’

These flavors are either artificial, chemically-based compounds, or ‘natural flavors,’ which could be highly processed derivatives of virtually anything.

Some sodas, like Mountain Dew, also contain brominated vegetable oil (BVO), a known flame retardant that gives the soda its ‘bite.’ Yuck. If you still feel like you need your daily soda, try some of these all natural recipes.

We’ve all walked or driven by a fast food restaurant and experienced the familiar, tempting scents of salty, sugary, fatty, highly processed foods. Whether it’s cravings for chicken nuggets, a cheeseburger and french fries, or a milkshake, Americans’ biggest addiction is to fast food.

You wouldn’t think that too many disgusting chemicals would need to be added to it, since salty, sugary, fatty fried foods usually taste pretty good on their own, but apparently they just couldn’t help themselves, as most fast food items contains a ton of addictive chemicals and preservatives.

Case in point: 19 ingredients make up McDonalds French Fries, a product which needs only to contain three: potatoes, oil, and salt. If you must have them, save your health and budget by cooking those fries at home – try baking instead of frying, using extra-virgin organic coconut oil, and topping with unrefined sea salt Yum.

3. Bacon and other cured meats

Just about every meat eater loves the taste of bacon and sausage, but when you buy overly processed and cured meats, that’s literally what you get: meat ‘flavor.’ And what ingredients are added to products like bacon, sausage, hot dogs, pastrami, and ham to create that smoky, saliva-inducing taste that everyone loves?

Those would be nitrites: preservatives that extend the expiration date of these products and enhance their taste and color. During cooking, nitrites combine with other ingredients to form carcinogens. They’re also a known cause of migraines in some people, and have been linked to colon problems and colorectal cancer.

Instead, stick to real, unprocessed, organic grass-fed meats, and cook them yourself at home. REAL meaty flavor without the chemicals.

Cheetos, pretzels, potato chips—all of these are designed with hopes that you will consume the whole box. Salt, like sugar, can be addictive, but salt isn’t the only factor that makes you want more and more of these food products. The way they look also attracts us, particularly that roasted light brown or yellow look they have. Once again, this look is designed by food engineers who absolutely do not have the health of the consumer in mind.

Rosenberg explains: “Cooking carbohydrate-rich foods at temperatures high enough to produce a yellow or brown surface usually means that acrylamide has formed. And, you guessed it, acrylamide is a cancer-causing and potentially dangerous chemical.”

A better idea is to make your own popcorn at home with non-GMO corn (in a pot—not the microwaveable kind) and season with some unrefined sea salt.

All of these foods are both highly addictive and highly unhealthy. Remember that when we choose what to eat, foods high in calories and sugar are not the only ones we must say no to: we also must say no to the additives and ingredients that keep the non-stop cycle of craving and addiction rolling.