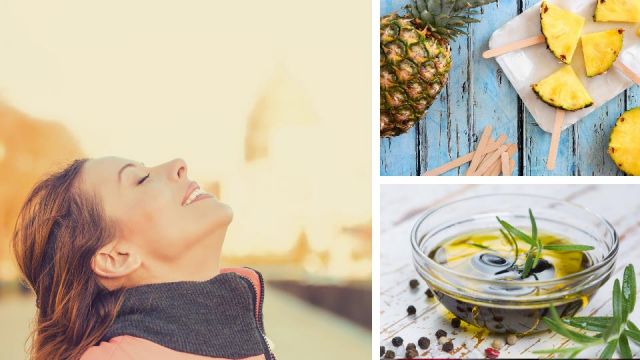 “Breath is the finest gift of nature. Be grateful for this wonderful gift,” says Amit Ray, the Indian author who has spent a lifetime advocating yoga, meditation and other spiritual practices.

Breathing is so fundamental that we hardly need to think of it, but when it is impaired, it’s hard to think of anything else. Unfortunately, respiratory ailments like asthma, COPD and bronchitis are all too common these days. Air pollution, allergic triggers, genetic factors and lifestyle choices (such as lack of exercise, poor diet and smoking) can cause or exacerbate diseases of the lung.

Fortunately, there are well-established natural ways of promoting respiratory health. After all, lung function is influenced not just by the air you breathe, but also by the foods you eat.

In fact, many herbs, spices, teas, fruits and vegetables are packed with phytonutrients that can help expel excess mucus, counteract lung inflammation and neutralize oxidative stress (which can undermine lung health on the cellular level). With all this in mind, here are five of the best foods and teas you can consume to breathe easier.

You’ve probably heard about the benefits of taking oregano oil at the first signs of a cold or flu. In fact, the spice contains a powerful array of nutrients that support immunity broadly, as well as potent antimicrobial compounds that can neutralize bacteria and other microorganisms.

The herb also contains natural decongestants like carvacrol and rosmarinic acid, which can help thin out excess mucus and improve airflow. You can add freshly chopped oregano (or the dried spice) to homemade chicken soup for a natural remedy that’s safe and effective for treating cold, flu and bronchitis symptoms. Similarly, adding two to three drops of oregano oil to your vaporizer can help alleviate nasal congestion and combat lung infections.

Pineapple is a fruit loaded with bromelain, which is a natural enzyme that helps the lungs flush out toxins. In addition to helping reduce mucus and phlegm, bromelain is a natural anti-inflammatory compound that can combat sinus infections while promoting lung health more broadly.

Here’s a quick and easy recipe for a tropical smoothie that can help you breathe easier. By the way, by adding peppermint oil you’ll be getting the throat soothing and vapor relief of methanol too.

Studies have shown that compounds in turmeric (most notably curcumin) can help reduce inflammation related to COPD. Indeed, one study even suggested that turmeric has the potential to inhibit and slow the progression of lung cancer. Other lung-healthy herbs and veggies include ginger, garlic and onions.

Here’s a turmeric tea recipe that can help you clean and detox your lungs:

For a more elaborate turmeric/ginger tea recipe, you can check out the following cool video.

Garlic is loaded with a compound called allicin, which is a natural antibiotic and anti-inflammatory agent. Traditionally, the herb has been used to treat asthma and other respiratory ailments. Now, modern research confirms that it can alleviate breathing problems in two ways.

First, garlic helps break down histamine, which is the chemical the body produces in response to allergic triggers. Second, garlic stimulates the production of prostacyclins, which are compounds that help keep the airways open.

Here’s a quick recipe for making your own asthma-fighting garlic milk.

According to recent research, scientists believe a compound in olive oil called oleic acid helps the body cope with the kind of physical stress that air pollutants cause. As Dr. Norman H. Edelman, Senior Scientific Advisor for the American Lung Association explains, “[Oleic acid] helps fight the primary effects of pollutants, which is inflammation and the bad molecules that come from inflammation, which are the oxidants.”