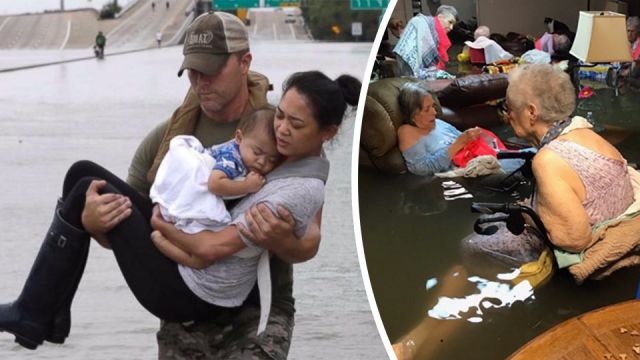 More than 30,000 people were left in need of emergency shelter Monday in Houston, as the flood waters continued to rise. Residents used everything from kayaks to inflatable beach toys to reach safety, as streets and homes were flooded with more than 30 inches of rain.

By the end of the week, Houston is expected to receive a year’s worth of rain in a matter of days, in what one meteorologist, Dave Hennen, described as a “one-in-1,000-years-type of event.”

So difficult to appreciate how bad the #houstonflood is. This photo is incredibly #HoustonStrong pic.twitter.com/qt1ZJ6kgaf

“Inland flooding from hurricanes is the deadliest part, more than wind and surge,” Hennen told CNN.

This used to be I-610 but it’s underwater. Look how high that water is! #Houston #Flood #Harvey pic.twitter.com/JkmM9WMWvL

Flooding not only inundated streets, but even reportedly managed to reach the second floors of some homes in Houston’s worst affected areas. Despite the best efforts of emergency workers, at least two people were reported dead at the time of writing, with a total of 450,000 residents in need of some kind of aid.

This deputy worked throughout the night doing high-water rescues in #Houston until he could no longer stand. This is Texas. #HurricaneHarvey pic.twitter.com/uk7Ri7nx24

Emergency services were overwhelmed by 911 callers and said they were prioritizing life or death calls. “This is a landmark event for Texas,” said FEMA Administrator Brock Long.
“Texas has never seen an event like this,” he said.

An unbelievable but honest photo of nursing home residents waiting to get rescued in Houston. pic.twitter.com/XtOXdjE7dZ

Streets are completely flooded in League City, TX due to #Harvey and even more rain is expected over next few days. https://t.co/H325OOBvja pic.twitter.com/LReWd3AWIg

In Houston, pleas for help go out over social media: “Please send help. 911 is not responding.” https://t.co/TT2V1N9ScL pic.twitter.com/0pJbsRiUeM

‘What we’re seeing is the most devastating flood event in Houston’s recorded history’ https://t.co/r7Er9quGlk pic.twitter.com/CPBHVyBJmT

Analysts say flooding from #Harvey likely to be devastating. Donate what you can here. https://t.co/yCCXaTc845 pic.twitter.com/iz8fRwHIST

As the worst of mother nature came down on Houston, we hope this brings out the best in human nature. https://t.co/S0bGDTmyhX #houstonstrong pic.twitter.com/exUX4yafmK

Much of Houston has seen over 2 feet of rain over the past few days due to #Harvey; heavy rain continues in the area https://t.co/wmswXJNLQl pic.twitter.com/SBi9gZl4sA

“This is a storm that is testing the city of Houston,” Mayor Sylvester Turner told reporters.
“The city will rise to the occasion,” he said. Even as the flood waters continued their advance, heroic stories of bravery and survival surfaced as Houston residents fought to save themselves and their neighbors.

This man is a preacher checking for people inside cars at 610 & 288 PC Brian Roberson Jr @KPRC2 #Harvey pic.twitter.com/NJx58ZN8N8

The @USCG rescued dozens of people left stranded in the aftermath of Harvey. #HoustonStrong https://t.co/kXcwPbqVhR pic.twitter.com/uBD4V2eDnn

One-year-old puppy braves floods in Houston in the wake of Hurricane #Harvey in a makeshift boat. https://t.co/8ADdaRGl1C pic.twitter.com/5AOtJox7c3

A 3 week old baby squirrel brought into the Wildlife Center of Texas during #Harvey One of 60 wild baby animals so far. @KPRC2 pic.twitter.com/gXl0ZhobMb

#Police saved the lives of a herd of cattle from the #HarveyFlood in Dayton, TX#HoustonStrong#HurricaneHarvey pic.twitter.com/UelzYBXzIA

New footage shows a man being rescued from a flooded car in Houston.#HoustonStrong#HurricaineHarvey pic.twitter.com/yCfgRY2DSo

Houston. Can’t imagine what another two feet of rain would do.
ht @kevinselle pic.twitter.com/LUBzD4XzM1

We are Houstonians… and we will get through this. #HoustonStrong #Harvey PHOTOS: https://t.co/KgXot1fbmH pic.twitter.com/4i7ojSwHrl

Service members from @TXMilitary assisting in rescues of people in flooded areas of Houston. #Harvey pic.twitter.com/ajFczh6k6H

Thank you to the national guard for coming and saving me and my family up I am forever grateful! pic.twitter.com/ij0KuJA5vJ

There is no us and them. Ever. There is only us. pic.twitter.com/6JzCCWF0Xo

Houston is inundated by a storm “beyond anything experienced before” https://t.co/KRyBXyiF2b pic.twitter.com/GzToCE5pFS

A man removes his two dogs from his apartment in Houston, TX. pic.twitter.com/z996UfC0Gk

A Houston reporter helps save a man from flood on live TV. https://t.co/tlgb3iq57M #Harvey pic.twitter.com/RrlSh95mXy

When even the #houstonflood can’t dent your American spirit. #houstonstrong pic.twitter.com/GopvV3vwUj

On social media, messages of solidarity and support poured in from across the nation — and the world.

Let’s show Houston they’re not alone. Let’s share your friends can do the same. #houstonstrong and share!! @TheMarsGen @AstronautAbby pic.twitter.com/E2RbtwVcZ4

more than 2,000 people have been rescued by authorities and many more by volunteers. #houstonstrong #HuracanHarvey pic.twitter.com/0NN0EwCwo7

***UPDATED LIST*** Volunteers needed after 5:30pm today only if you can get to the @GRBCC safely #houstonstrong #harvey #donationsneeded pic.twitter.com/yGTTOISN1c

Ours city is under water but we are #Houston and we will get trough this, we always have and we will do it a game #houstonstrong pic.twitter.com/nKLJIiEMs6

#houstonstrong @abc13houston our city is greater than the posessions we will lose. pic.twitter.com/zkJAf6VkVM

A big Thank You
to all of the first responders & citizens helping
with #HarveyFlood you’re amazing!
TY @L0stSandal Cptn Rusty & crew pic.twitter.com/XAKrsdRxKA

If you too would like to show your support for the people of Houston, then please give generously to the American Red Cross. Other charities supporting Houston include Greater Houston Community Fund and Foundation Beyond Belief. Alternatively, consider supporting one of Houston’s food banks, which will play an increasingly important role in the aftermath of the disaster. A full list of food banks can be found here.