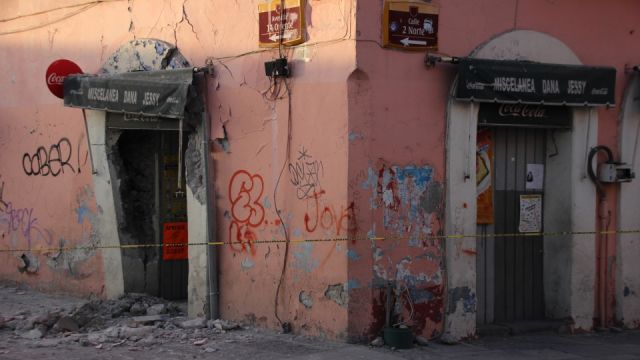 First, the ground vibrated — as if a truck had just driven by. Then my house wobbled, before the metaphorical truck came crashing through the living room. The walls shuddered, and the world started tipping sideways.“It’s gonna be a big one,” my partner shouted as the house turned to jelly, sinking to one side, before swinging in a gut-wrenching arc in the other direction.

The power snapped off, and things started hitting the floor. I kept thinking it would stop any moment, but it only intensified. I couldn’t stand; something was rattling. There was a sound outside, but I had no idea what it was. After an eternity, the shaking subsided, and I got to my feet. Outside there was panic. A neighbor was clutching her kids as they sobbed.

You never expect your home to make headlines

You never expect your own city to make international headlines, but sadly my home of Puebla just drew global attention for all the wrong reasons. On Tuesday, Puebla was among the worst hit cities of a magnitude 7.1 earthquake that struck central Mexico. The epicenter was initially reported as Axochiapan, a small town in the state of Morelos, near the border with Puebla. At the time of writing, authorities had confirmed at least 139 deaths, mostly in Morelos, Puebla, Mexico state and the Federal District. The death toll is expected to rise, with an unknown number of people still trapped in collapsed buildings across central Mexico.

In Mexico City, at least 27 buildings collapsed, including two schools. “I was in class with 4 [and] 5-year-old children,” said teacher and Puebla resident Elaine Allard. “We were dancing… and we were jumping when we realized we already were shaking!”

Another teacher, Emmerson Torres-Bautista, said he was at home when the quake hit. “I felt like death. I came outside and heard my mom’s house cracking next door. I was really scared my mom wouldn’t make it,” he said, recounting how he rushed to save his mother as the house sagged and groaned around them.

Then, his attention turned to his 3-year-old nephew, who was at a kindergarten a few blocks away. “I have never run so fast in my life. I got there, came in the kindergarten and found my little guy with his mates in the middle of the garden. The teachers and other students were more scared than my nephew,” he said. “Everyone else was freaking out.” Schools and kindergartens have already been closed across central Mexico, amid fears of more tremors.

Shallow earthquakes can be more deadly

According to experts, the quake itself was especially deadly due to its depth, at just 51 kilometers below the surface. “Anything below 70 kilometers is considered a shallow quake,” meteorologist Allison Chinchar told CNN.

“That’s important, because shallow earthquakes often cause the most damage, compared to the ones that are deeper, regardless of the strength. But this also was a relatively strong earthquake.”

In Puebla, the city looks like a ghost town, after more than 15,000 people evacuated the city center. The normally bustling colonial center was empty within an hour of the quake — with the exception of police, emergency services and a smattering of thrill seekers armed with iPhones and handycams.

Rubble littered the sidewalks, though most of the damage appeared superficial.

“Hey, check this one out,” one teen with a camera phone said, gesturing to show me some old stonework that had tumbled down the side of a building.

Nearby, a car had lost its back window.

Around the corner, a convenience store looked like it had been smashed with a giant hammer. A line of police shooed crowds away.

Further down the road, the sidewalk was littered with glass from the shattered windows of an apartment complex.

Elsewhere, a couple of streets were blocked by car accidents. In one, a bus and a car appeared to have been hit by falling debris. One of the cars looked like it had been opened by the world’s largest — and bluntest — can opener.

As night fell, the death toll was continuing to rise, and a sense of unease drifted through the streets.

“At least we’re getting off early,” one of my neighbors, a fishmonger joked. He tried to bookend his remark with a chuckle, but it got caught in his throat.

Judging from images on social media, it could have been a lot worse.

Earthquake happened on anniversary of another powerful quake

Even the timing of the earthquake had an air of dark forbidding. The disaster took place on the 37th anniversary of the deadliest earthquake in Mexico’s history. On September 19, 1985, nearly 10,000 people died. That quake hit Mexico City, destroying more than 400 buildings and inflicted nearly $4 billion USD in damages.

The latest earthquake also took place less than two weeks after another major quake. Hitting the impoverished southern state of Oaxaca, the 8.1 quake killed over 60 people, and was technically stronger than the 1985 disaster. A week and a half later, hundreds of people remained in need of emergency aid, including clean water and food.

However, the back-to-back quakes are likely little more than a bitter coincidence, according to geophysicist John Bellini. “Usually you don’t have large ones in the same general region right away,” Bellini told The Verge. “But in highly [seismically] active regions of the world, it can happen,” he said, explaining how Mexico sits at a crossroads of three tectonic plates.

He explained how the latest quake could theoretically be related to the one earlier this month, but it’s improbable. “Usually to have something directly related, they happen within minutes of each other, whereas this has been a week and a half,” Bellini said.

Nonetheless, it’s possible the latest quake could spark more tremors — but it’s impossible to know for sure. Despite the evacuations, I for one have no intention of leaving my home while there’s work to do. Torres-Bautista on the other hand, says he has other plans.

“We plan to get so wasted and celebrate mother earth,” he said, telling me how he and a few friends and family members plan to ride out the nervous night with a few crates of beer, and some good company.

“If we die, we won’t die sober and if we wake up to a beautiful morning, all of this will pass as one cool story to tell,” he said.