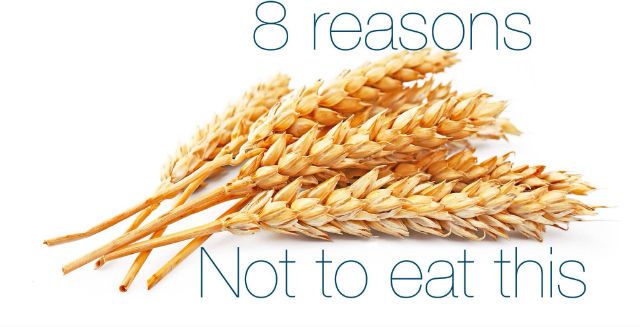 Many of us know that white flour is unhealthy, as it has had its nutrients bleached and processed out. However, there is still a prevalent belief held today that whole wheat products are nutritious, and deserve center-stage in a healthy diet. Unfortunately, this couldn’t be further from the truth.

According to Dr. Marcia Alvarez, a specialist in nutrition for obese individuals, “modern wheat grains could certainly be considered as the root of all evil in the world of nutrition since they cause so many documented health problems across so many populations in the world.”

The following are eight reasons why it would be wise to remove wheat from your diet completely.

Throughout the 1960s, agricultural scientists experimented with cross-breeding multiple types of wheat in order to achieve higher yields. While this led to more food for many people, especially in third world nations, the resulting wheat barely resembled the healthy grain of our ancestors.

One example is Clearfield Wheat, which is widely grown in the Pacific Northwest. The seeds and embryos of this wheat strain are exposed to sodium azide, an industrial toxic chemical. Along with chemical mutagens, various wheat strains are exposed to radiation techniques in order to induce mutations.

According to Dr. William Davis, author of the revolutionary book, Wheat Belly, these methods can be even more dangerous to our health than genetic modification.

Wheat is doused in pesticides from seed to storage

Many of the common pesticides used have been found to have estrogen-mimicking properties, which can lead to hormonal imbalances, and may lay the foundation for breast cancer (and other hormonally-based cancers), endometriosis and early puberty in children.

When the wheat has been harvested and is ready to store, collection bins are sprayed with insecticide. The wheat is sprayed again with “protectant” chemicals once in the bins. If insects are found in enough of the samples from the bins, they are then fumigated with toxic gases. Furthermore, some farmers apply plant growth regulators, often comprised of synthetic hormones, to their crops.

Wheat is often dried at very high temperatures, which partially cooks and denatures much of the proteins, and depletes the nutritional value that originally still existed in the wheat. What is left is very much devoid of the nutrients often attributed to whole wheat. The nutrients that a wheat product advertises are often synthetically added back in – and synthetic nutrients are difficult for the body to absorb and use.

Approximately one percent of the population suffers from what is known as celiac disease, an autoimmune reaction to gluten, a protein found in wheat, barley and rye. For these individuals consuming gluten leads to severe inflammation which damages the lining of the small intestine. This renders the body unable to absorb the essential nutrients that it needs to function.

Along with those who have celiac disease, up to 30 percent of the world is estimated to have some degree of sensitivity to gluten. This may be very hard to diagnose, because it is sometimes mistaken for fatigue, irritable bowel syndrome or a non-specific digestive condition.

Gluten is a protein composed of two parts: glutenin and gliadin. Glutenin is responsible for the elasticity of wheat products (think pizza dough). Gliadin has been found to mirror the effects of opiates on brain receptors. This stimulates the appetite and creates cravings for more and more gluten.

It is this addictive tendency, in part, that has led manufacturers to feature wheat in many processed foods and other products, knowing that people will come back for more.

In the 1970s, psychiatrists found that removing wheat from the diets of schizophrenic patients led to dramatic improvements in their symptoms. They also found that symptoms worsened again when wheat was reintegrated into the patients’ diets. This phenomenon was eventually traced to the presence of gliadin, which besides being addictive can lead to a host of neurological complications.

Some of these include hypersensitivity and outbursts in ADHD patients, increased mania in bipolar individuals and worsened food obsessions in those with eating disorders. Wheat gliadin has also been linked to peripheral neuropathy and gluten encephalopathy (a form of dementia).

Wheat can lead to spikes in blood sugar, as well as weight gain

Along with gluten being an addictive substance, wheat’s effect on blood sugar is also driving the rising percentages of overweight and obese individuals in the Western world. The complex carbohydrate found in wheat is known as Amylopectin A. Amylopectin A is an easily digestible carbohydrate, and causes blood sugar to quickly spike when it is consumed.

Because of this, eating wheat may lead to many of the same effects as eating sugar, including insulin resistance, weight gain and belly fat. It can also lead to digestive disturbances including bloating and irritable bowel syndrome.

As wheat causes rapid and significant blood sugar surges, it can (much like sugar) lead to an inflammatory response. If inflammation is left unchecked and becomes chronic, it can pave the way for a number of diseases that affect multiple bodily systems, including autoimmune conditions such as arthritis, acid reflux, eczema and even cancers.

Also, the gliadin found in wheat has a permeative effect on the intestinal barrier, which can allow the wheat lectins to enter the bloodstream. This can also cause inflammation, and the range of conditions that accompany it.

All in all, even if you are not gluten sensitive, avoiding wheat is just plain good sense.