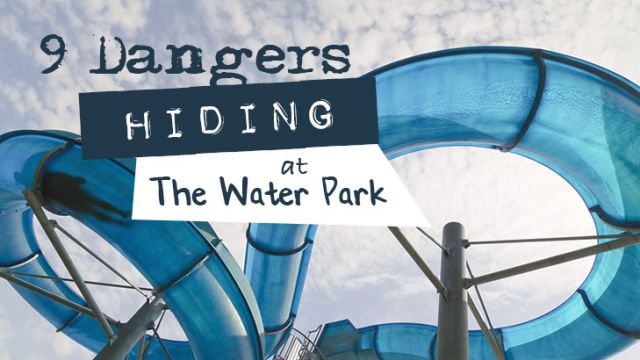 Before you head to the water park, you might want to consider what you and your kids are really plunging into. Water parks are a great way to cool down on a hot summer day. But when not managed properly they can harbor microorganisms — some potentially fatal — that cause eye, ear and respiratory irritations, skin rashes, flu-like symptoms and more.

Most people have at one time or another peed in the pool — admit it. So, there’s a good chance the next time you go to the water park there will be urine in the water. But according to a study conducted by Environmental Science and Technology, you may want to rethink peeing in the pool.

Urinating in chlorinated water creates two toxic chemicals, trichloramine and cyanogen chloride, which form when chlorine from the pool reacts with nitrogen in urine. It turns into the noxious chemical within an hour of interacting. Both chemicals are associated with lung problems, but cyanogen chloride can also affect the heart and central nervous system. While it is toxic, it would take a lot of urine to turn a pool so toxic that it would kill you.

What could possibly be worse than swimming in pee — swimming in poop, of course. Studies conducted by the Center for Disease Control and Prevention (CDC) found that feces frequently get into pool water by swimmers. Water samples collected from pool filters from public pools were tested for genetic material like DNA. The study found that 58 percent of the pool filters tested positive for E. coli, bacteria usually found in the human gut and feces.

Finding a high percentage of E. coli-positive filters is a good indication that swimmers frequently poop in the water or feces inadvertently rinse off their bodies because they didn’t shower before getting into the water.

Although the study didn’t address water parks, it’s reasonable to assume that all public pools contain E. coli thanks to voluntary contamination, or hygiene practices, says the CDC. Keep in mind, chlorine and other disinfectants don’t kill germs instantly. That’s why it’s important to protect yourself by not swallowing pool water. The CDC also recommends not swimming when you have diarrhea. It’s also important to take a thorough pre-swim shower, and of course, not poop in the water.

Although legionella is found naturally in freshwater environments, like lakes and streams, it can still be found at water parks. Legionella can grow and spread in man-made water systems and hot tubs that aren’t drained after each use, suggests the CDC.

The bacterium grows and multiplies, and then spreads in droplets — like a mist — small enough for people to breathe in. The infection known as Legionnaires’ disease occurs by breathing in droplets sprayed from jet streams in hot tubs that have not been cleaned properly or disinfected. Symptoms can be serious and sometimes turn into fatal pneumonia, or Pontiac Fever, an influenza-like illness, according to Aquatic Guidelines.

When we think of norovirus we generally think of cruise ships. Outbreaks can be severe and transmit from person to person rapidly. Norovirus is highly contagious and spreads through consuming contaminated food and water or coming in contact with contaminated surfaces. Although Norovirus is chlorine sensitive, if a pool is not managed correctly it can pose a real threat to pool goers, according to the Aquatic Guidelines.

Symptoms may include an intestinal infection, which causes stomach pain, nausea, vomiting and diarrhea. Norovirus illness can be serious, especially for young children and older adults whose immune systems are compromised and less able to combat the infection.

Brain-eating amoeba sounds like something out of science fiction, but unfortunately we’re hearing more and more about this deadly virus. Just last week a North Carolina water park shut down their rafting activities after an Ohio teenager died by a brain-eating amoeba she contracted from the water. Eighteen-year-old Lauren Seitz, died after she was exposed to the amoeba naegleria fowleri at the US National Whitewater Center (USNWC).

The amoeba is common in warm lakes, rivers and springs in summer, and although it does not cause illness if swallowed, it can be fatal if forced up the nose, state health officials released in a statement. The one-celled organism cannot survive in saltwater and will not infect a person who drinks contaminated water.

The deadly amoeba causes illness up to nine days after exposure. Symptoms normally include headache, fever, vomiting, confusion, seizures, loss of balance and hallucination. The rate of fatality after a brain infection is 97 percent and occurs within five days, according to the CDC.

Cryptosporidium, commonly known as “crypto,” is a microscopic parasite that enters recreational water through sewage or feces from humans and animals. This parasite is protected by an outer shell, which makes it able to survive for long periods outside the body and resilient to chlorine. This parasite can be spread in several different ways, one of which is swallowing recreational water found in water parks and public pools. Crypto is a major cause of waterborne disease among people in the US, according to the CDC.

Symptoms start anywhere from two to seven days after exposure to the parasite. The most common symptom is watery diarrhea, but symptoms may also include stomach cramps or pain, dehydration, nausea, vomiting, fever and weight loss. Symptoms may last for up to 30 days.

Giardia is another microscopic parasite that causes the diarrheal illness and is found in soil, surfaces and water that has been contaminated with poop from infected humans or animals. Like crypto, giardia has a protected outer shell that allows it to survive outside the body for long periods of time and makes it resilient to chlorine. While the parasite can be spread in different ways, recreational water is one of the most common modes of transmission.

Giardiasis is the most often diagnosed intestinal parasitic disease in the United States and among travelers with chronic diarrhea. Symptoms can last for one to two weeks and include diarrhea, gas, greasy stools that tend to float, stomach or abdominal cramps, upset stomach or nausea and vomiting and dehydration.

But you can also get itchy skin, hives and swelling of the eye and joints. Giardiasis may also cause weight loss and failure to absorb fat, lactose, vitamin A and vitamin B12. In small children, giardiasis might delay physical and mental growth, slow development and cause malnutrition.

Hepatitis A is commonly transmitted through fecal matter. This strain is a problem in public swimming pools if someone accidently has a bowel movement in the pool and others inadvertently swallow the pool water, suggests Hepatitis Central. While Hepatitis A is not chronic, it will cause liver inflammation. Most people’s liver, however, can fully recover without any long-term damage. Those suffering with chronic liver disease are more susceptible to serious illness as a result of hepatitis A infection.

If you’re susceptible to foot fungal infections then a water park may not be your best source of recreation since they tend to spread on surfaces that have not been properly disinfected. Athlete’s foot and human papillomavirus, which causes plantar warts, can be spread from contaminated surfaces to the bare feet of pool-goers, according to the Aquatic Guidelines.

Have fun but be smart

Recreational swimming is a great form of exercise — just adhere to safety measures. Here are some tips: