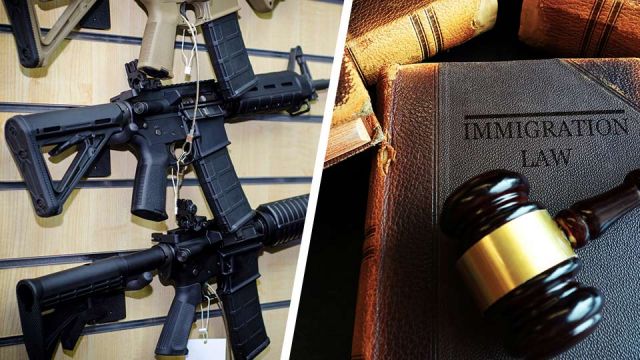 In the past month and a half, the United States has seen an extraordinarily large amount of heart-wrenching violence and death in the Las Vegas shooting, the New York City truck attack and the Sutherland Springs church shooting, which occurred yesterday.

With that being said, we have to ask ourselves, what is going on and how can we fix the problems we are facing in a smart and unbiased way?

One thing I have noticed is that our society has become far too political in the aftermath of these tragic events, rather than focusing on mourning the victims. It seems like people rush to one side to explain their narrative.

On the one hand, you have politicians and political commentators trying to use the situations to further their agendas to try and convince the populace that it is needed to prevent future attacks.

Here is a political pundit pushing for gun control after the Texas shooting:

.@speakerRyan plans on doing nothing to change gun laws following the Texas shooting—Nothing to stop it from happening again. #GunControlNow

The terrorist came into our country through what is called the “Diversity Visa Lottery Program,” a Chuck Schumer beauty. I want merit based.

On the other hand, some don’t want to talk politics at all. Instead, you have families mourning their lost loved ones in the face of tragedy, such as the Sutherland Springs church pastor’s 14-year-old daughter. She was one of several kids killed by the shooter.

Her parents were out of town. pic.twitter.com/9cXDYJMmlG

Considering all of this, would you, the reader, be okay with having tougher gun laws, but also tougher immigration laws at the same time? This could be one solution to the divide between Americans calling for more strict laws concerning both issues.

Clearly, it’s not a perfect world. Even with boosted laws in each category, there’s absolutely no guarantee they will do anything, primarily due to the fact there are a lot of guns sold on the black market, and it’s possible there are already a lot of future terrorists in the United States.

However, there are things that can be done to help.

If we do boost immigration laws and vetting, perhaps we will able to prevent terrorists from coming in. Along those same lines, perhaps if we do boost gun laws, especially semi-automatic laws (which were used in both the Vegas and Texas mass shootings), it will make it harder for mass shooters to get their hands on these weapons or “bump-stocks,” which the Las Vegas shooter also used.

Personally, I’m not a gun owner because guns scare me, but I respect and understand why they are important and beneficial to some, such as with the counter shooter in Texas yesterday, who reportedly stopped the shooter from continuing his rampage.

What I’m asking is this: if we can get stronger gun laws, can we all agree on stricter immigration laws?

There’s no guarantee this would work, but perhaps it’s a step in the right direction towards a solution. In this way, people can come to a compromise, instead of arguing and solving nothing.

Think about it: if we ban “bump-stocks” and other add-ons to potentially dangerous weapons, or just semi-automatic guns in general in certain areas, maybe we could save future lives. Obviously, there will be some upset with this, but if we could pass a law for this and a law calling for stricter immigration, wouldn’t everyone sort of win and get what they want?

Famous negotiation teacher Dale Carnegie once said, “Looking at the other person’s point of view and arousing in him an eager want for something is not to be construed as manipulating that person so that he will do something that is only for your benefit and his detriment. Each party should gain from the negotiation.”

Here’s a song I seriously think we should all listen to after so many heated debates about what should be done to counter the calamitous events which have transpired over the past month: