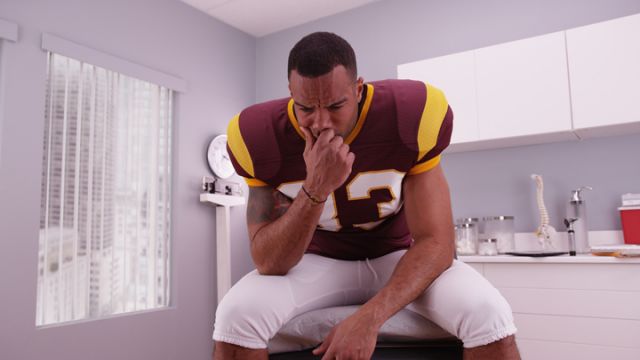 Concussion rates of young Americans could be soaring as much as 500 percent nationwide, according to recent findings. The new data comes just days after a separate study found that children across the country are reporting concussions at historically high rates.

So what’s going on? Why are children being concussed in such high numbers, and is this a serious health problem?

The latest data compiled by FAIR Health reports that concussions skyrocketed between 2010 and 2014 for people age 22 and under. This group of young adults and children account for about three-quarters of all concussion diagnoses nationwide, with the most children between the ages of 15 and 18. “This suggests that high school sports may present the greatest risk for concussions, followed by middle school sports … and college sports,” FAIR Health concluded.

Researchers implicated school and college sports by noting gender patterns in concussion reports. In most states, young males suffer concussions at rates far beyond that of young females, with exceptions in just a few states like Pennsylvania and Connecticut.

“Those are states where girls’ sports are popular, including field hockey, ice hockey, lacrosse and soccer,” FAIR Health President Robin Gelburd explained in an article for The Huffington Post. Gelburd continued, “In states where football predominates, such as Texas, Florida and California, boys are especially likely to have more concussions than girls.” The findings were based on figures collected from a database of more than 20 billion privately billed healthcare claims.

Concussions aren’t just bad headaches – they can have a range of disruptive medium and long-term health impacts on both children and adults. A separate, smaller study earlier this year from researchers at the University of North Carolina found that students can suffer academic problems in the wake of a concussion. Among the findings was data suggesting 83 percent of concussion victims experience some kind of problem studying that didn’t exist before the injury. Overall, the study found concussed students experienced disruptions with their studies at much higher rates than other pupils recovering from different types of sporting injuries, such as broken arms.

Erin Wasserman, the lead author of the study explained, “After a concussion, there is an energy crisis in the brain; the brain needs more energy to heal than it has available. Because of this, individuals experience symptoms like headache and dizziness, they have trouble sleeping, they may experience depression and they often have trouble concentrating and remembering things,” Wasserman told Reuters.

Further down the track, serious concussions can also lead to long term problems like persistent headaches and dizziness, along with cognitive issues that make it hard to concentrate, make decisions and retain short term memory. Concussions can even impact mood. While these long-term symptoms are relatively rare, they can make life difficult for years on end. “All of these symptoms are known to cause problems in school,” Wasserman added.

However, it’s not just young Americans that are experiencing more concussions. FAIR Health’s research was prompted by the release of yet another study in early July, which found the average rate of concussion reporting across all age groups doubled between 2007 and 2014. The study also found a sharp rise in youth concussion rates.

However, the data may not necessarily reflect as much of a spike in concussion cases as it may initially seem, according to Dr. Alan Zhang of the University of California who was the lead researcher of the study. “The rates at which concussions are rising may in part be due to the rise in youth sports participation and also better diagnostic skills and training for coaches and sports medicine professionals,” he said during the recent American Orhopaedic Society for Sports Medicine‘s Annual Meeting.

In other words, the rising levels of reported concussion cases might be partly due to greater awareness of the injury. Zhang continued, “This trend is alarming however, and the youth population should definitely be prioritized for ongoing work in concussion diagnosis, education, treatment and prevention.”

Concussions have been put in the spotlight in recent years as one of the most common, yet potentially debilitating sports injuries impacting Americans. In 2015, the film “Concussion” brought national attention to the extent of concussion injuries among National Football League (NFL) players. Then, in April of this year, the issue hit headlines when an appeals court gave the thumbs up to a settlement between the NFL and thousands of former players who said they suffered concussions. The settlement was expected to cost the sporting league around $1 billion.

Although public attention has largely been focused on the impact of concussions on professional sportspeople, the slew of new data released in recent months suggests this common injury is a growing problem for all of us.

Have you or someone you know experienced a concussion? Tell us about your experiences in the comments below.