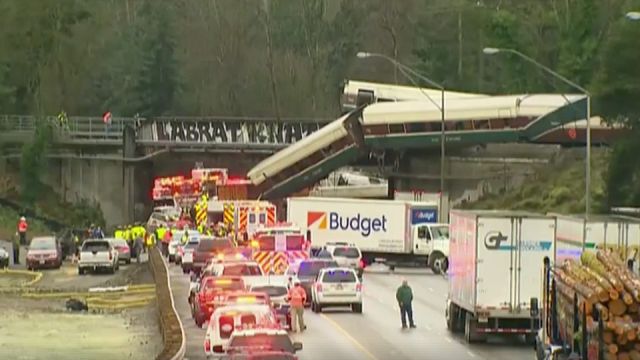 This morning, an Amtrak train derailed in Washington State causing multiple fatalities and dozens of injuries. The train departed Tacoma, Washington just before 8 a.m. on a brand new route which launched today. Atleast 3 people were killed.

NEW: NBC’s @anblanx reports that there are multiple deaths and injuries following an Amtrak train derailment in Tacoma, WA. Cause of the crash is under investigation: pic.twitter.com/X8Hu2Yx4F2

New photo of the Washington Amtrak crash via @wspd1pio. pic.twitter.com/MhuE61QK2B

Crazy Amtrak crash on I-5. pic.twitter.com/Rx8IQNjxCV

Five motor vehicles, along with two semi-trucks were hit by the derailed train The train’s cars were scattered around the surrounding woods.

Amtrak derailment survivor describes moment of impact: “We were catapulted at the seats in front of us and the next thing that we knew, our car had crumpled at a portion at the top and we were down an embankment.” https://t.co/4XVUQcjLZV pic.twitter.com/HN4cPV3q1s

The Cascades service from Seattle to Portland was supposed to be rated for a maximum of 79 m.p.h. from where it derailed in DuPont. The last known speed of the train was 81 m.p.h.

According to updated reports, the train was going roughly 80 m.p.h. in a 30 m.p.h. zone where it crashed.

Passengers say that after the derailment, emergency doors weren’t working correctly, so they had to knock out windows to exit.

“We heard a creaking [sound],” Chris Karnes told ABC News. “The train started to wobble for a moment. And then we were catapulted at the seats in front of us and the next thing that we knew, our car had crumpled at a portion at the top and we were down an embankment.”

LATEST: New images from the Amtrak crash scene in Tacoma, WA where there are confirmed injuries and fatalities, @anblanx reports. https://t.co/NjlofTwQrD pic.twitter.com/ZOOHc6InH3

Kimberley Reason, a spokeswoman for the Regional Transit Authority claims that the track was recently updated so that the state’s department of transportation could run the brand new Cascade route there.

Updates will be posted as they come in.