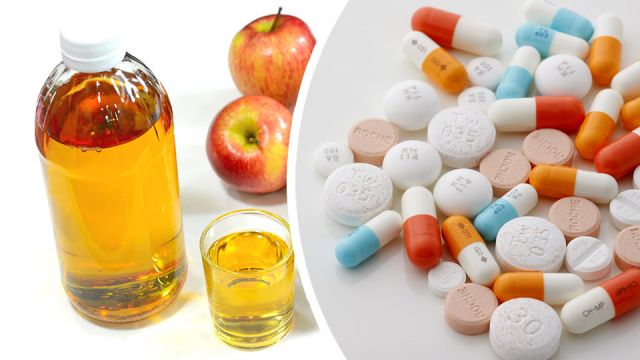 A brief note before continuing: Always consult your doctor on issues regarding medication. If you’re ever in doubt about whether something isn’t right, you need to see a doctor. The following is for informational purposes, and shouldn’t be considered a substitute for a trip to the doctor’s office.

Diuretic medication can be used to treat a variety of health problems, such as bloating. Basically, it’s medication that makes you pee a lot. Diuretics are also used by some people to lose weight, though this practice is controversial. One thing that isn’t controversial is that diuretics and apple cider vinegar don’t mix well. Apple cider vinegar affects potassium and sodium levels. In turn, these affect the body’s water levels. So if you’re already losing a lot of water, apple cider vinegar can leave you severely dehydrated.

Along with anyone taking the above medications, anyone in the following categories should keep away from apple cider vinegar as well:

Apple cider vinegar is powerful stuff, and most people who use it take a while to settle on a suitable dosage (too much and you can seriously damage your stomach lining). For children, determining the dose is even harder. Moreover, there’s been very limited research on the suitability of apple cider vinegar for kids. So, don’t take risks, and don’t give children apple cider vinegar without consulting a doctor first.

Anyone at risk of bone density problems

Anyone at risk of bladder cancer

How much ACV is right for you?

Apple cider vinegar is strong, and can damage your stomach lining, mouth and teeth if used incorrectly. Generally, doctors recommend dosages of just one or two tablespoons of heavily diluted apple cider vinegar each day. However, you should consult your own doctor before trying a dosage for yourself.

To start reaping the benefits of ACV, try mixing one tablespoon of apple cider vinegar into a glass of room temperature water first thing in the morning (before food), then work your way up from there.