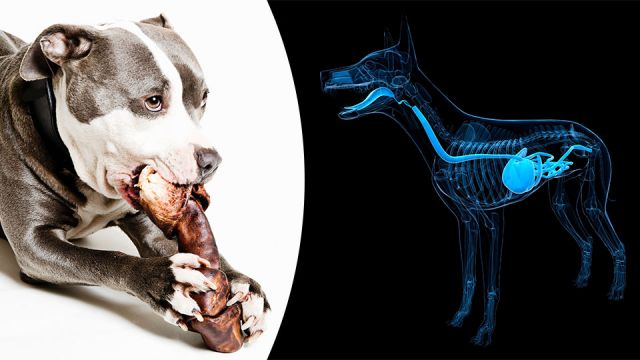 If you’re currently giving your dog commercial bone treats, listen up! According to the U.S. Food & Drug Administration (FDA), 68 pet illnesses and 15 deaths have been linked to bone treats. And we’re not talking uncooked, butcher-type bones. Issues are arising from the highly processed and packaged bone treats normally found at grocery and pet food stores.

Those bone treats could kill your dog

The FDA has listed a variety of bone treats for dogs as dangerous, including commercially-prepared ham bones, pork femur bones, rib bones and smoky knuckle bones. The bones may be dried through a smoking process or by baking. They might also contain other ingredients such as preservatives, seasoning and smoke flavorings.

Here’s what could happen to your dog

Here are the illnesses reported to the FDA by vets and dog owners whose pets have eaten bone treats:

So far, the reports involved about 90 dogs, and some households had multiple dogs affected. Moreover, the FDA received seven reports of product problems, including moldy bones or bone treats that splintered when chewed by the dog.

Other dog treats pulled from shelves

In 2015, jerky treats made in China were pulled from store shelves after thousands of dogs and cats became sick after eating them. Even several people who handled the products became sick as well.

Is there any wonder why? Last month, the Alternative Daily reported that roadkill and euthanized shelter pets are routinely used in pet foods. And while dogs may be scavengers by nature, highly processed foods and questionable practices don’t make for a healthy dog. Maybe it’s time to consider making your own dog treats!

If your dog’s a sucker for jerky treats, he’ll love this healthier version, made with only one ingredient — sweet potatoes! This treat is a great alternative to rawhide, which poses choking and blockage risks.

Instead of highly-processed dog treats, why not make a batch of healthy homemade biscuits? You can customize the recipe by adding shredded carrots, shredded zucchini and even cheese!

We love our pets and want only the best for them. So, read nutrition labels on treat products just like you would read the nutrition labels on packaged foods for people. When possible, consider baking your own doggy treats. Only then can you truly be sure you’re not feeding your dog an ingredient that could make them ill!