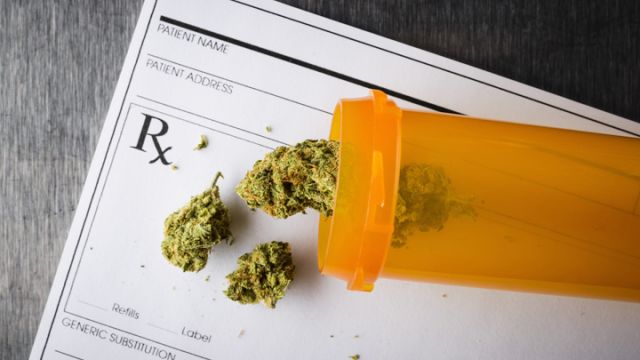 While the legalization of recreational marijuana is a hotly debated topic, it’s difficult to deny the medical benefits that this long-demonized little plant possesses. Now, adding to the list is marijuana’s potential to help prevent, and perhaps even fight, the most common form of dementia: Alzheimer’s disease.

One component of Alzheimer’s disease, which has been linked to its formation, is the buildup of amyloid plaques. These plaques wedge themselves between neurons, and form beta amyloid molecules which clump together. If the buildup of these plaques could be prevented, it would spell a huge step in the battle against this debilitating and heartbreaking disease.

So, where does marijuana come in? Previous research, performed in 2006 and published in the journal Molecular Pharmaceuticals, found that tetrahydrocannabinol (THC), the active component in marijuana, could bind to receptors and help clear the brain of beta amyloid plaques.

The authors of the 2006 study, which was carried out through computational modeling, explained:

“Compared to currently approved drugs prescribed for the treatment of Alzheimer’s disease, THC is a considerably superior inhibitor of Aβ [beta amyloid] aggregation, and this study provides a previously unrecognized molecular mechanism through which cannabinoid molecules may directly impact the progression of this debilitating disease.”

While this information has been available for some time, a new study recently published in the journal Aging and Mechanisms of Disease found that THC could also reduce inflammation within brain tissue. This inflammation is thought to be a significant factor in the growth of amyloid plaques in the brain.

On the study, one of the researchers, David Schubert of the Salk Institute for Biological Studies, explained:

“Although other studies have offered evidence that cannabinoids might be neuroprotective against the symptoms of Alzheimer’s, we believe our study is the first to demonstrate that cannabinoids affect both inflammation and amyloid beta accumulation in nerve cells.”

The first author of the study, Antonio Currais, added:

“Inflammation within the brain is a major component of the damage associated with Alzheimer’s disease, but it has always been assumed that this response was coming from immune-like cells in the brain, not the nerve cells themselves… When we were able to identify the molecular basis of the inflammatory response to amyloid beta, it became clear that THC-like compounds that the nerve cells make themselves may be involved in protecting the cells from dying.”

“Altogether these data show that there is a complex and likely autocatalytic inflammatory response within nerve cells caused by the accumulation of intracellular Aβ [beta amyloid], and that this early form of proteotoxicity can be blocked by the activation of cannabinoid receptors.”

More research needs to be done on the therapeutic role of THC in regards to Alzheimer’s disease, since the 2006 research was done by computational modeling, and this latest study was performed on human neurons grown in a lab setting. Results in a lab are different from results in the real world. However, the findings researchers have had so far are exciting, and spell hope for eventually breaking the cycle of Alzheimer’s disease.

Marijuana has been previously found to alleviate many conditions, including the nausea of chemotherapy, and symptoms of multiple sclerosis, rheumatoid arthritis and inflammatory bowel disease (IBD). It has also been very effective in certain cases of seizure disorders. On top of that, it has been linked to alleviating the pain of neuropathy which accompanies many illnesses, including cancer and diabetes.

Whatever your feelings are on recreational use, there is a lot of value in continuing to explore the medical potential of marijuana. It may help a lot of people live healthier, better lives.