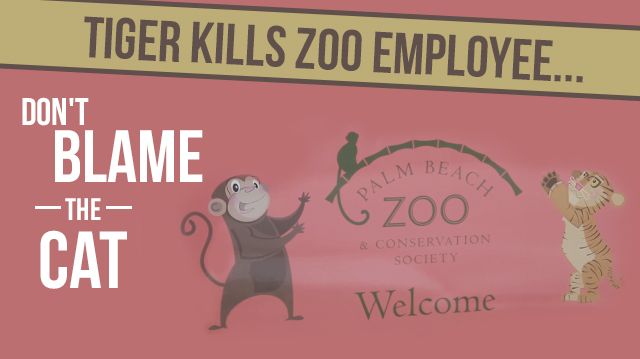 A Malayan tiger was subdued with a tranquilizer following a deadly encounter at approximately 2 p.m. EDT on Friday at the Palm Beach Zoo & Conservation Society in West Palm Beach, Florida. Handler, Stacey Konwiser, was taken to St. Mary’s Medical Center where she died.

The Palm Beach Zoo Speaks Out

“The entire Palm Beach Zoo family is saddened beyond what words can describe at this incident and tragic outcome,” said Palm Beach Zoo spokesperson Naki Carter.

Konwiser, 38, a zoo employee and handler, was engaged in routine work in a behind-the-scenes area where the tigers normally eat and sleep. Konwiser was preparing the tiger for a show called “Tiger Talk” when the Malayan tiger attacked her. Shows like “Tiger Talk” are intended to familiarize guests with resident animals, according to the Zoo’s website. Konwiser, whose husband, Jeremy Konwiser, also a keeper at Palm Beach Zoo, worked as the lead handler for three years.

Zoo officials confirmed, there were no guests present during the attack. “We want to underscore that at no time was the public at any risk. We also want to emphasize that at no time did any animal escape.” said Carter.

Zoo guest, Alena Rodriguez, said she had seen a tiger at its exhibit at 1 p.m. and decided to come back for the scheduled feeding. However, when she returned to the exhibit just before 2 pm, she saw a trainer run by and say, “we need to evacuate.” A code red was immediately issued and guests were ushered out of the Zoo in an orderly fashion, followed by a lockdown. After the attack, the tiger was quickly subdued by tranquilizer, allowing officials to reach Konwiser. She was taken by helicopter to St. Mary’s Medical Center and later was pronounced dead.

“Zookeepers help breed the tigers to make sure they don’t go extinct,” Carter said. “ Stacey was an expert. She dedicated her life to her mission of protecting tigers.”

It’s not the animals fault, just an unfortunate accident

“You don’t get into this business without the love for these animals and understanding the dangers that’s involved even more,” said Carter to the media on Friday. While the endangered cat recovers and awaits its fate, other handlers speak out.

When it comes to safety there should always be two handlers in a cage at a time with double doors and double locks. Accidents such as this one, are rarely the animals fault, suggests Clayton Rosaire, handler for Big Cat Habitat to ABC, My Suncoast.

“There’s a million things that can go wrong, but normally it’s human error, it’s just an accident,” says Rosaire. “It’s something no one planned on, no one would have ever expected it.”

Nevertheless, the Animal Legal Defense Fund (ALDF) calls on the Occupational Safety and Health Administration (OSHA) and the United States Department of Agriculture (USDA) for maximum penalties in the Palm Beach zookeeper’s death. Death could have been prevented with appropriate safety measures suggest the ALDF.

Injuries and deaths linked to big cats are not uncommon according to the ALDF. Since 1990, there have been approximately 24 deaths and 265 injuries in the U.S. caused by captive big cats. Apparently previous attacks and escape-type scenarios have also resulted in the deaths of over 128 big cats — many of which, were endangered species.

“As long as employees are allowed to work in dangerously close proximity to tigers, elephants, and other dangerous animals, a significant risk of serious injury or death persists,” says the ALDF.

Threats to the Malayan tigers

In Malaysia, poachers infiltrate the forests and plunder its wildlife, including tigers, according to the World Wildlife Fund (WWL). The demand for wildlife is high in Malaysia — for folk medicines and as a status symbol for the wealthy.

Logging operations and road development also pose big threats to Malayan tiger habitats. In addition, deforestation for agriculture or commercial plantations creates frequent encounters between tigers and livestock. The cost to farmers can be high so farmers retaliate by killing the tigers. Tigers killed, often end up on the black market, linking human-tiger conflict and poaching. As a result, Malayan tigers have become a critically endangered subspecies, with less than 250 of them left in the world.

The Zoo is part of a breeding program that works to keep the tigers from becoming extinct. They provide a special program where guests can pay extra to see the tigers. The zoo does not receive government funding, according to their website.

People for Ethical Treatment of Animals (PETA) issued a statement criticizing the zoo.

“Today’s incident is only the latest in a long list of fatal maulings around the world,” said PETA, “and that list will continue to grow as long as tigers and other exotic animals are locked in cages and compounds for human amusement.”

One of the Palm Beach Zoo’s major conservation partners, Wildlife Conservation Society (WCS) has been active in tiger conservation efforts in Malaysia for the past six years, according to the zoo’s website. They work to protect areas, and significantly increase protection for tigers “on the ground.” The Palm Beach Zoo currently provides funding for the WCSs work and in return, sends staff to the field to participate in conservation activities — mainly centered around the GPS tracking of tigers.

“In nature, tigers have home ranges of hundreds of miles, so it’s no wonder that confining them to small spaces causes them to lash out in frustration, stress, anxiety, and agitation because they’re denied their freedom and the ability to behave normally in every way — including choosing their mates, raising their young, and seeking privacy from prying eyes,” said PETA.

PETA further sent condolences to the zookeeper’s family with hopes that the incident would save human lives in the future and that zoos everywhere would reconsider confining big cats and other wildlife.

This tragic incident is the first death to occur, in an animal encounter, throughout the sixty year history of the Palm Beach Zoo & Conservation Society — the zoo remains closed for the weekend..

Do you think we should be keeping these big cats in captivity, even if it is to help keep the species alive?