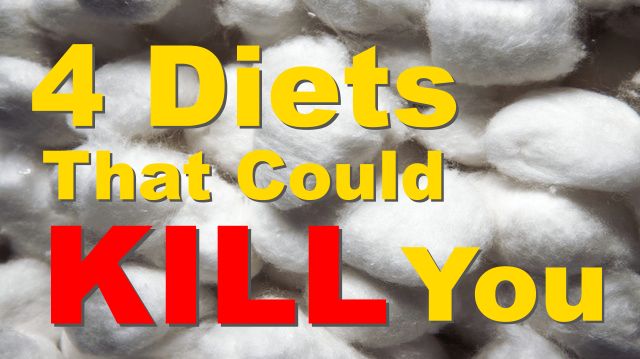 According to the latest Gallup poll information, 51 percent of Americans claim they would like to lose weight. While there is no shortage of diet approaches to choose from, some of the crazy diet schemes are so dangerous they could kill you.

Bad Fads That Could Be Deadly
Some diets are just so downright dangerous they should be illegal. Here are just four examples of diets that are so potentially hazardous they could be deadly:

The Kimkins Diet
The Kimkins diet was surrounded by scandal and for a very good reason. It promotes the plan of living on a mere 500 calories a day and using laxatives, both of which are very dangerous. Even diets of 800 calories a day can cause fatigue, diarrhea, hair loss, nausea, stroke, heart arrhythmia, and brain hemorrhage.

Unfortunately, this diet got a boost in popularity in 2007 when it was promoted by an article in Woman’s World, which the magazine has since apologized for. People who made the unfortunate decision to try this diet, (probably persuaded by the fake testimonials), reported side effects such as lethargy, hair loss, fainting, and irregular heartbeat.

This diet was initially promoted by Heidi Kimberly “Kimmer” Diaz, a morbidly obese woman who faked a 200-pound weight loss using a picture of a Russian model. She eventually ended up filing for bankruptcy after being sued in a class action lawsuit.

Breatharianism
This diet is downright insane. Promoters of breatharianism claim they can live on sunshine alone, without the need for any food or water. Now it is a scientific fact, that if you don’t eat or drink you will eventually die, but not before you suffer nasty side effects of starvation and dehydration.

Nonetheless, a self-described prophet of breatharianism, Jasmuheen, claimed that she had been living for years without eating any real food. She was challenged by a TV station to prove that claim. Within 48 hours, she became dangerously dehydrated, and a supervising doctor had to immediately stop the challenge.

Red Bull Diet
Even just one can of Red Bull has the potential to increase your risk of heart attack and stroke. However, a 23-year-old woman from New Zealand, Brooke Robertson, tried to lose weight by drinking 14 cans of Red Bull a day. (Yes, you read that right, 14 cans a day.)

Not only is that an expensive endeavor, but extremely dangerous as well. By drinking 14 cans of Red Bull, she was taking in 1,540 calories daily. That amount exceeds the recommended level of 1,200 calories for the average woman who is dieting. Also, all that Red Bull contains an overwhelming 378 grams of sugar, which is equal to consuming over 94 sugar cubes daily. That is not even counting the massive amount of caffeine being taken into the body at a downright horrifying rate.

Brooke may have lost weight on the diet, but it had to be from the horrible side effects such as insomnia and jitters. Not to mention, Brooke suffered a heart attack and had to be hospitalized for over two weeks. Now she has a heart murmur that won’t go away, in addition to cramping, anxiety and constant pain. 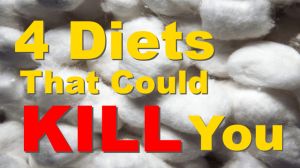 Despite the fact that cotton is clearly only meant for clothing and personal care products, there are some people who have taken up the idea of eating a diet of cotton balls in order to lose weight.

Apparently, they pre-soak the cotton balls in something sweet such as orange juice, and then eat the cotton balls instead of real food. Obviously, cotton is not a food group and provides absolutely no nourishment for the human body.

Secondly, cotton balls can easily become lodged and form blockages called bezoars. These blockages can cause gastric ulcers, choking, gangrene, and intestinal bleeding. If a bezoar does develop, it requires surgical removal and can lead to tissue death.

It is proven that being overweight can put you at risk for many health conditions, such as heart attack, stroke, type 2 diabetes, and cancer. That being said, there are some simple, effective, and healthy ways to lose weight that you can start immediately:
· Eat a diet of nutrient-dense foods that covers many food groups, with particular attention to whole grains, vegetables, fruits, and lean meats.
· Limit your intake of trans fats, added sugars, processed foods, added sodium, and alcohol.
· Keep your daily calorie intake to a reasonable level based on your body type, and caloric needs.
· Do some form of physical activity every day, such as walking, running, bicycling, swimming, or dancing. The important thing is not the activity, but that you keep yourself moving.