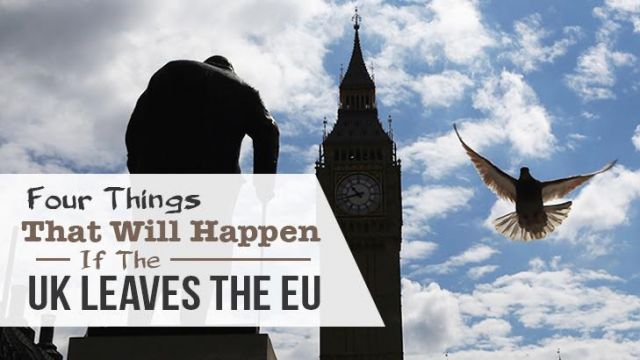 Citizens of the United Kingdom have spoken. They voted to Leave.

The vote isn’t universal. English citizens were the most keen to bid the EU farewell at 53.2 percent. The Scottish were decidedly more pro-Europe, with only 38 percent of voters supporting a leave decision.

The vote also isn’t binding. There is still the possibility of parliament deciding to stay, dragging their feet or holding another vote in the hopes of a different outcome. Though such strategies bolster citizens’ assertions of an elite state beyond the constraints of democracy, they have been commonplace in EU dealings thus far. A petition calling for a second referendum — citing the results as too close given relatively low turnout — has already garnered significant support. Voter turnout was 72.2 percent.

We’ve already seen the beginnings of economic uncertainty that economists predicted. A day ago the pound was worth about $1.50. Today it is worth $1.36. This is the weakest pound the world has seen since 1985. It isn’t just economics that will be in flux if the UK does initiate a Brexit. Here are four other things that will happen:

A two-year exit plan will be negotiated

The specific guidelines to be followed in the event of a member state’s exit from the European Union are outlined in Article 50 of the Treaty of Lisbon. Once a country has announced its intention to leave the union, it will have two years to negotiate the terms of the exit. Unless an extension is agreed to by all parties involved, the nation will cease to be a member either when an agreement is made or when two years have passed since the initiation of negotiations.

From this point on, Britain would no longer be subject to EU laws. It would also lose the benefits of membership, many of which are economic.

A vote of Leave did not dictate how to leave. In fact, the campaign specifically chose not to lay out an exit model. Even if the UK does move forward with Brexit, Parliament could easily follow the letter of the people without following the word of the people. Pro-Remain MPs (of which there are 454 compared to 147 Leave supporters) are already discussing plans for “reverse Maastricht.” If they succeed, Britain will no longer be an EU member but will stay in the single market.

In short, the Leave voters may find themselves with a technical win but a practical lose. They will not receive many of the alleged benefits they hoped for — including control of their immigration policy and a reclaiming of yearly EU fees — but will have no say over how the EU rules work.

Migration policy has been one of the driving forces of the Brexit campaign. The number of immigrants living and working in the UK has been on the rise since the European Union was created in 1993. Eurosceptics in the UK were particularly disgruntled by the inclusion of Eastern European states. They worried that increased immigration would saturate the UK job market and harm national workers.

The refugee crisis turned discontent into outrage. Even though the UK has played a relatively minor role in the crisis — granting asylum to only a small percentage of Europe’s refugees — public opinion has blasted against the inflow of displaced people. The media has been publishing alarmist pieces at an alarming rate. Articles linking EU immigration policy to terrorism abound alongside rumours of terrorists using refugee policy to infiltrate Europe.

UKIP leader Nigel Farage refused to apologize for his anti-migrant Vote Leave poster. The poster featured a crowd of refugees at the Slovenian border and the large red words “Breaking Point” followed by “the EU has failed us all.” His response to criticism? “I can’t apologize for the truth.”

For a country that already feels overwhelmed by increased immigration patterns, the refugee crisis may have been the straw that broke the camel’s back. No matter what form a UK exit takes, migration policy will be revised with an eye towards fewer migrants entering the country.

Not everyone wanted to leave. In Scotland and Northern Ireland, 62 percent and 55.7 percent of voters respectively voted to stay in the European Union. Neither is fully prepared to follow Britain, even if it means leaving the UK.

Scotland has already flirted with the idea of independence. A referendum to leave the UK lost by only a slight margin in 2014 — 55 percent voted to stay. The current administration promised to hold another referendum if the country’s circumstances changed. This certainly counts as a significant change.

Martin McGuinness, a Sinn Féin politician who has been deputy first minister of Northern Ireland since 2007, is calling for a poll on reunification in light of the UK leave vote. In contrast, First Minister Arlene Foster asserts that the “test for a border poll has not been met.” Neither minister’s position is surprising given their party lines.

Other nations will consider voting on EU membership

One Brexit affiliated fear is that other European nations may follow in the UK’s footsteps. The fear is not entirely unfounded. Some of the issues brought to light by the Leave Campaign in the UK have sparked a chord with citizens of other European nations. Movements to initiate a referendum in France, Italy, the Netherlands and Sweden have been reported. Even nations that do not want to leave the EU will be hard pressed to deny the people a vote if they call for one.

The upshot of this possibility is that the Brexit agreement is unlikely to be a good deal for Britain. The hodge-podge of fair economic policies alongside increased national sovereignty that Leave voters hoped for is a fantasy. The European Union needs to be able to point to post-Brexit Britain as a threatening example of what happens when member states choose to leave.

If the UK does leave the EU, it will undoubtedly be an unfavourable exit agreement.