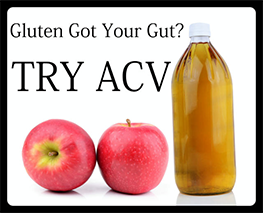 There are many simple, natural substances and foods that are invaluable when it comes to great health. Not only do these natural health aids help to alleviate uncomfortable and sometimes even dangerous conditions, but they can also work in a preventative way as well.

The Alternative Daily research and writing team works hard to bring you all the latest information and scientific data about these easy, cost effective home remedies that everyone should have in their home. Among these are such things as honey, coconut oil and apple cider vinegar.

Introduced to the United States in the 1950’s by D.C. Jarvis, author of Folk Medicine: A Vermont Doctor’s Guide to Good Health, apple cider vinegar is finally being embraced as a dietary supplement worthy of attention.

What is Apple Cider Vinegar?

Raw, organic and unpasteurized apple cider vinegar contains what is known as “the mother” of vinegar, which makes the vinegar appear somewhat cloudy. Although it may look rather unappealing, it is the mother that is loaded with raw enzymes and gut-friendly bacteria that promote health and healing.

Raw organic apple cider vinegar (ACV) is made from organic apples and undergoes a double fermentation process, which produces enzymes and preserves many of its health-promoting characteristics. Some of the beneficial ingredients in raw organic ACV include:

New medical research is beginning to unfold in favor of raw apple cider vinegar as a “go to” for many common conditions. Traditional uses of ACV are vast. To name just a few, it has been used to ease digestion, aid in flu prevention, reduce inflammation, regulate pH balance, alleviate allergy symptoms, ease nausea and heartburn, as a staple in detox regimens, and for a number of skin conditions, including reducing acne and smoothing wrinkles.

You may be gluten intolerant and not even know it. In fact, most people have some form of sensitivity to modern wheat, which is found in all sorts of foods.

Gluten is a protein compound found in wheat, barley, rye. It is found in many processed foods, unfortunately, not always with names that divulge the fact that there is gluten inside. As we detailed in a previous article , about one percent of the population has celiac diease, an autoimmune reaction to gluten, which can lead to inflammation and the inability of the body to absorb essential nutrients. While celiac disease is receiving much more attention nowadays, it is estimated that only about 17 percent of those afflicted know they have it.

Up to 30 percent (some experts say as high as 40 percent) of people in the world are estimated to have a sensitivity to gluten, in varying degrees. As medical tests for gluten sensitivity are often unreliable, it can be difficult to diagnose. It is often mistaken for a digestive disorder such as irritable bowel syndrome (IBS), or generalized fatigue.

Have you ever eaten a meal that included gluten, perhaps a big bowl of pasta, gone to bed, only to awaken prematurely feeling like someone had filled your gut with lead weights? Maybe you ate way too much or maybe you are responding to the gluten in the food you ate. Gluten sensitivity not only destroys a good night’s sleep but can also cause painful digestive distress. (Note: lacking digestive distress symptoms does not necessarily mean you can safely tolerate gluten – there are a number of other symptoms to look out for when determining if gluten is a problem for you.)

Desperate to get some shut eye, you may reach for the bottle of Pepto Bismol only to find that it provides just temporary relief at best. This is where raw apple cider vinegar comes in.

Because ACV is slightly acidic it can be helpful for a number of conditions and is especially beneficial when used as a digestive aid. When taken before meals, apple cider vinegar can help combat the side effects of gluten or other digestive disturbances. At the same time, apple cider vinegar can help eliminate toxins and promote healthy gut bacteria which is beneficial to overall health and wellbeing.

How to take apple cider vinegar 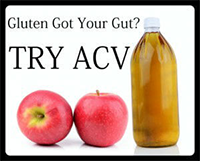 Although there are no official rules for how to consume ACV, most people take a couple of teaspoons a day mixed with water, raw honey or fresh juice, in the morning or before meals. You can use ACV as a salad dressing, drizzle it on steamed greens or marinate your organic meat in it. It has a truly zippy taste that will clear out your sinuses, but it will grow on you the longer you drink it.
Keep in mind that ACV must be diluted. Straight apple cider vinegar may damage tooth enamel or burn mouth and throat tissue.
ACV may interact with diuretics and other medicines, so be sure to check with a healthcare provider before using.

So, if you are planning on eating a big meal or a meal that contains gluten (although we would strongly suggest you give up gluten), try sipping on an ACV cocktail prior to eating. You may find that you have a restful night’s sleep and are not woken up with stomach pains or bloating.

When choosing an ACV make sure to select one that is raw, organic and unpasteurized, as the pasteurization process can destroy many of the health benefits. Most vinegar manufacturers nowadays pasteurize the vinegar before it hits the shelves, to get rid of the mother of vinegar, and in turn, a lot of the nutrients that the vinegar offers.
Make your own

The good news is that it’s easy and inexpensive to make ACV right at home. It just takes a little time for it to ferment.

By using apple scraps like the peels and cores from the apple, your apple cider vinegar can be ready in less than two months. Another method is available using whole apples, but the process takes much longer – typically about seven months.

A large bowl or jar with a wide mouth
Cores, peels and leftover pieces from organic apples
Cheesecloth to cover the jar and prevent debris or bugs from getting in

Leave the apple scraps out, allowing them to turn brown. Once they’ve browned you can add them to your bowl or jar. Cover them with filtered water. If you leave extra room you can continue to add more apple scraps over the next few days, although it isn’t necessary. Cover the bowl or jar with a piece of cheesecloth and place it in a warm, dark place. After several days you’ll notice that the mixture will begin to thicken and a gray-colored scum begins to form on top. Once this has happened, don’t add any more scraps. Allow it to sit for a month in order to ferment.

After this period, you can begin testing it. Once it tastes strong enough, strain out the apple scraps, place it into a bottle, seal and store in the refrigerator. It will probably be cloudy, which is fine, but if you’d like it to have a clearer appearance, you can use a paper coffee filter to strain and remove the sediment.