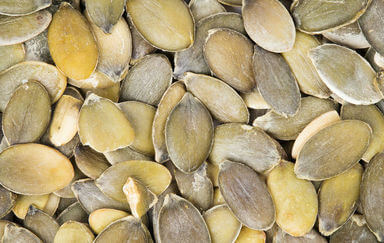 You probably know what the difference between a grain and a seed is, but many people don’t realize there is a big difference in how each affects our health.

There is a lot of confusion in regard to grains; in fact, you’ll find most “healthy” food pyramids include them as the basis of a healthy diet.

Grains, beans, nuts and seeds are all in the same family as they are actually all seeds. Grains grow from the seeds of grasses, such as wheat, corn, oats or rice. Nuts, such as almonds, pecans, and walnuts, come from the seeds of a tree. And then there are the ones we refer to as seeds directly, such as sunflower seeds, pumpkin seeds and sesame seeds.

All plants need assistance in dispersing their seeds as they are unable to move, so they need a way to create their own way of migrating, like growing delicious fruits around their seeds in order to entice animals, and humans, to eat them and carry them off to another location where the seeds are eventually spread.

Grass seeds like wheat or corn do not have fruit. They rely mainly on the wind to disperse their seeds as they weren’t designed by nature to be eaten. Grains are actually toxic to humans in their raw state.

Before agriculture was invented, our ancestors were said to have eaten very few, if any, grains. Many different cultures throughout human history, even well into the last century, ate a totally grain-free diet and generally enjoyed good health.

Following the advent of agriculture, when grains became commonly consumed, research of historical records has found that human health around the world declined in a number of ways, including an increase in malnutrition and infectious disease.

We’ve been told by many nutrition and health experts that we’re supposed to eat at least 3 servings of grain per day, but there is no evidence that this improves our health; in fact, there is more evidence that it can harm health.

The negative effects of many grains

Wheat, and all of its forms, including durum, spelt, kamut, semolina and others, contain gluten, which has stretches of repetitive amino acid sequences that are particularly difficult for our body to digest.

Compounds referred to as prolamins are found in all grains, but particularly the type found in wheat, rye, and barley are known to be especially irritating to the immune system.

Partially digested gluten can cause many health problems, especially in the digestive and immune systems of those who are genetically susceptible, leading to issues like Celiac disease and gluten sensitivity.

Grains can be a problem for all types of people, however, due to a new protein that came about after a hybridization form of wheat was produced in the 1960s and ’70s, known as gliadin. Gliadin protein is considered an opiate; it binds into the opiate receptors in the brain, stimulating appetite.

Some health experts believe that it is the consumption of wheat and other grains that is responsible for a significant amount of illness, obesity, and suffering in humans today.

A few of the common illnesses linked to grains include Chrohn’s and Celiac disease, Irritable Bowel Syndrome and other digestive disorders. Consuming grains can also increase the chances of developing diabetes and even worsen brain disorders such as Alzheimer’s and Parkinson’s disease, as well as all autoimmune diseases such as lupus and rheumatoid arthritis.

Health benefits of nuts and seeds

Nuts and seeds, on the other hand, offer a host of health benefits. Just about any kind of nut or seed can help you to burn belly fat and help control blood sugar, decrease appetite and cravings for unhealthy foods. They contain healthy fats along with a wide range of micronutrients.

They also offer an excellent source of vitamins, minerals, protein and fiber. Each type of nut or seed has its own unique and wonderful benefits that can contribute to optimal health, some of the best seeds include flax seeds, hemp seeds, sunflower seeds and chia seeds. Nuts like almonds, walnuts and pecans are also outstanding.

If you haven’t looked into the benefits of giving up grains, perhaps it’s time to try. Consider at least adding more nuts and seeds to your diet along with lots of organic fruits and vegetables while consuming fewer grains as a step toward eventual elimination.