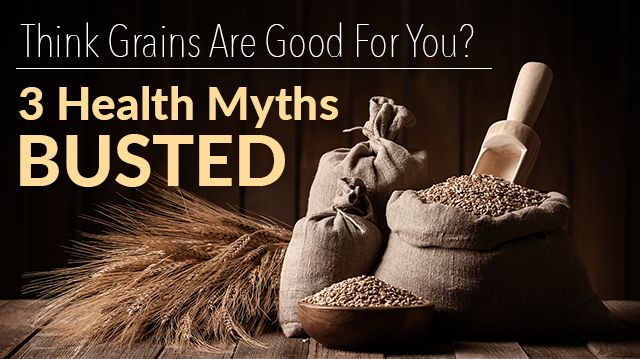 You’ve probably heard it before and laughed it off, thinking that the person saying it must be horribly misinformed or even downright crazy: grains are bad for you. The notion that grains might not be the epitome of health seems utter nonsense, as it goes against official government-mandated and doctor-issued recommendations. Recommendations you’ve been hearing all your life, which have been broadcast to you on TV, in mainstream health magazines, and of course in supermarkets and health stores.

In the face of all that popular consensus regarding the health benefits of grains, how could they possibly be bad for you? Especially if they’re whole grains — that’s what all the health gurus say you should eat for a nutritious and well-balanced lifestyle, right?

Wrong. It seems that we have been fed myths about the health of grains all our lives, and it’s time to disband these myths so you can see why eating grains might not be doing you as much good as you once thought.

Myth: grains are an essential source of fiber

Turns out fiber isn’t the purely benign substance we first thought it was. A recent study has found that high-fiber foods rub up against the lining of the gastrointestinal system, rupturing the outer covering of the intestinal walls and increasing the level of lubricating mucus. Scientists interpreted this rather disgusting description as being a good thing. However, the rupturing of your intestinal walls can only ever mean bad news for your gut. It weakens the gut and allows toxins and potentially hazardous food proteins to pass through into your bloodstream and wreak havoc with your immune system.

Furthermore, the supposed production of “lubricating mucus” due to the abrasion of your intestines is startlingly similar to that reported in irritable bowel syndrome, where sufferers often complain about strange mucus in their poop.

The point is, while grains might be associated with an essential source of fiber, it is apparent that eating large amounts of high-fiber foods, such as those made with grains, can actually damage your digestive tract and result in a number of other harmful effects on the body. Fruit and vegetables contain more than enough fiber for you to be healthy and maintain regular bowel activity.

Myth: grains are the very building block of the food pyramid

If you’re familiar with some of our other articles on healthy fats and eating a more ancestral diet, you’ve probably began to wonder whether the food pyramid, which was shoved into our faces as kids and every time we walked into a nutritionist’s office, is really all that great. Well, the food pyramid shows grains as being the very foundation of a healthy Western diet, with consumption of whole grains recommended in nearly limitless quantities every day. This should further convince you that the government-endorsed food pyramid is way off the mark, as grains really shouldn’t appear on the pyramid at all.

All grains contain anti-nutrients — compounds that prevent an animal from digesting the seeds inside the grain. These include gluten, lectins, and phytates. Gluten, found in wheat, rye and barley, can result in a wide range of autoimmune diseases, compromising calcium and vitamin D3 levels in the body, messing with the thyroid gland, and causing severe bone defects. Lectins bind to the intestinal wall of humans and cause leptin resistance, which can result in diabetes and obesity. Phytates prevent absorption of nutrients and minerals from your food, making you deficient in a range of compounds necessary for proper functioning.

So why are grains of paramount importance on the food pyramid? Looking back to the years following the agricultural revolution at around 10,000 BC, grains increasingly came to be the most important currency — a currency that governed who was rich and who was poor. Those who had land and could grow and store grains could control the population’s access to the main source of food, and were therefore more powerful.

It just so happens that things are exactly the same today. In the US, the Department of Agriculture has and continues to be strongly linked to grain-centric agribusiness, the lobbyists of which are more powerful even than the pharmaceutical industry. As a result, the government issues hefty subsidies to anyone growing wheat, corn, or other grains, at the expense of public health.

Myth: grains are an essential source of vitamins and nutrients 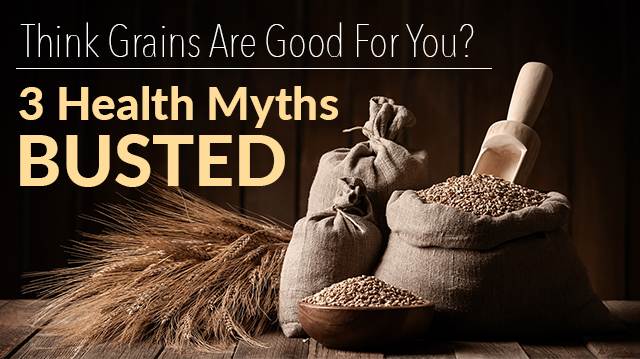 We’ve often been told that whole grains are an important source of vitamins and minerals. These claims are completely unfounded, for a number of reasons. First, modern-day grain varieties are completely different from their original, ancestral counterparts. The grains we see on our plates today have been cultivated, selected and modified based on their ability to produce higher yields and last longer on the shelves. Higher growth rates and denser harvests have thus become more important than nutrient availability, and the result is modern-day grains that are severely lacking in vitamins and nutrients.

To make matters worse, the anti-nutrients discussed earlier prevent nutrient absorption. What meager nutrients we could receive from grains are almost never absorbed by the body due to the action of phytates, which bind to vitamins and minerals and prevent their uptake by the body. Therefore, when eating grains, the nutrients pass clean through our digestive system and out the other side without ever nourishing our bodies.

Still not convinced that grains are bad for you? Find out more reasons they might be doing you harm here.