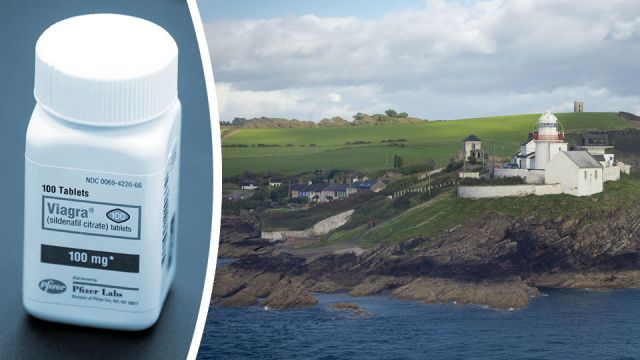 Male residents of a village in rural Ireland say a Viagra factory is giving them a seriously hard time. The village of Ringaskiddy in Cork is reportedly facing an erection epidemic. Ruling out the luck of the Irish, locals have instead blamed fumes from a nearby Pfizer factory that manufactures the Viagra erectile dysfunction drug.

“One whiff and you’re stiff,” bartender Debbie O’Grady told The Sunday Times. Other locals agree, with some suggesting the drug may not just be in the air.

“I think that Viagra must have got into the water supply,” former Pfizer factory worker Fiona Toomey told the newspaper. “I’m convinced that’s what happened at the very beginning before they were so closely regulated,” he stated.

The company has dismissed the claims as a local myth and assured the people of Ringaskiddy there’s nothing to worry about. “Our manufacturing processes have always been highly sophisticated as well as highly regulated,” a company spokesperson told The Sunday Times.

However, locals claim they’re not alone in feeling like the company might have stiffed them. “It’s amazing the number of people who come to this village, perhaps out of curiosity, and then never leave,” O’Grady’s mother Sadie said. “They settle down here. As they say, there’s something in the air — not that we need it, of course. But for some fellas with problems in that department it can be a blessing,” she said.

Two decades of an erection epidemic

Such claims are nothing new. For two decades, Ringaskiddy has held the unofficial title of Viagra world capital. The nearby Pfizer factory at the center of the current controversy is the world’s single largest manufacturer of Viagra and the backbone of the local economy. Yet reports of unusual stiffness around town began almost immediately after the factory opened in 1997.

By the following year, locals were already sick of the fame the factory had brought. “A few weeks ago, people in the Village Inn were reported to be merrily joking about how the ‘Pfizer riser’ would turn Ringaskiddy into the ‘erection section’,” The Independent reported in June 1998. “Now the joke is wearing thin,” the newspaper said.

Back then, the factory largely catered for the U.S. market, with some locals initially disavowing the drug as a thoroughly American phenomenon. “Let’s face it, aging Yanks will do anything to try to prolong their youth,” one local said at the time.

The demand that keeps growing and growing

Nowadays, Ireland consumes more than its fair share of the drug, with the country’s public health system spending more than €10 million ($12 million USD) each year on Viagra. Ringaskiddy’s most famous export is also expected to see yet another boom in demand in the coming months. Ireland’s closest neighbor, the U.K., is set to become the first country in the world where Viagra can be bought over the counter.

In a decision made public in late November, British regulators announced the move as part of efforts to tackle the lucrative erectile dysfunction drug black market. According to U.K. authorities, last year around £17 million ($23 million USD) in unlicensed and fake Viagra medication were seized. Even before over-the-counter approval, the U.K. already saw nearly three million erectile dysfunction drug prescriptions filled in 2016.

However, authorities there have warned that too many anxious consumers continue to purchase the drugs online, often from unregulated websites. “Erectile dysfunction can be a debilitating condition, so it’s important men feel they have fast access to quality and legitimate care,” says Mick Foy from the U.K. Medicines and Healthcare Products Regulatory Agency, as told to Reuters.

The agency has previously warned that counterfeit Viagra pills can be dangerous; they’re often allegedly manufactured in unhygienic conditions, and can be contaminated with unknown chemicals. Their potency can vary wildly, and doctors have reported patients suffering vision loss and the risk of heart problems. So next time you’re looking for something to improve your sex life, buy it from a credible source, or just head over to Ringaskiddy and breathe in the fresh country air.