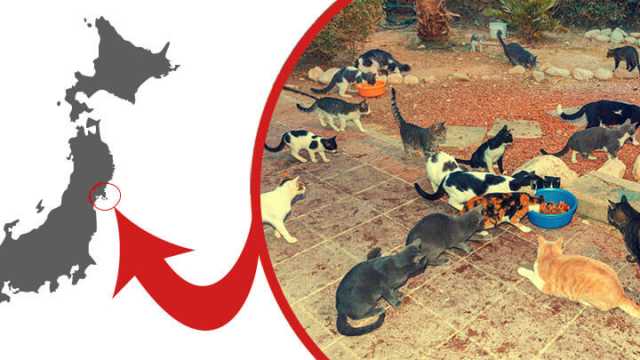 If a six-to-one ratio of cats to humans sounds right about your style, then there is a place you may want to visit. No, I’m not talking about YouTube. The island of Tashirojima off the coast of Japan has six times as many cats as people.

Feel free to take a moment and bask in a daydream of frolicking through fields of long grass with a whole feline society following in your footsteps. Picture a sea of cats walking past your legs in the hope of getting a little scratch on the head, stopping only to bat things off tables or find awkward (yet impressive) places to sit. Feels nice, doesn’t it? Feel free to go back to that place in your mind whenever you are having a stressful day.

There is more to this island than just being a cat lover’s heaven. These are feral cats. As such, many of them are not getting the nutrition, attention or medical help they need. With that being said, this cat population has shown a remarkable ability to survive and thrive on the island. As a result, many cat-lovers are making this island (or others in Japan just like it) a can’t-miss tourist destination.

Rise of the felines in Tashirojima, Japan

Tashiorjima is a small island in the Pacific Ocean by the city of Ishinomaki in Northern Japan. While other “cat islands” exist in Japan, Tashijormi is considered the main one. It is certainly the most feline-populated of them all.

Originally, the main source of economy for the island was raising silkworms for use in textiles. Villagers brought in cats to chase the mice away. Eventually, they out-populated the humans. Now the island is down to slightly less than 100 people but has as many as 600 cats. Most of the economy is now based on fishing. But with increased awareness about “Cat Island,” tourism is showing potential to bring a new financial boost to their struggling economy.

Most of the island’s human inhabitants are elderly, with over 80 percent being above 65 years of age. This is actually not an uncommon occurrence in small villages, usually in outlying areas or mountain regions. Referred to as “terminal villages,” there is concern that once the current crop of citizens pass away, there will be no succeeding generation.

As for the cat population on the island, just the opposite is true. Some residents are taking steps to control the population by neutering a small amount of them. But for the most part, it seems residents are happy to have them around. They even view them as a source of good fortune.

Cats are all over Japanese culture. From the explosion of cat cafes (coffee shops with cats in them) to Hello Kitty and numerous folklore tales of cats turning into humans and vice versa, it’s hard to believe they aren’t even native to the country.

They were introduced into Japan around 500 A.D. Technically, they were an invasive species, but since they are so cute we won’t focus so much on that aspect. The cats quickly became a useful part of Japanese society by keeping mice away from Buddhist temples. In 1602, they became a key protector of the country’s economy.

Rats were wreaking havoc on the silkworm industry, so the Japanese government ordered all domestic cat owners to release their pets into the streets to catch them. The “cat draft of 1602” must have been difficult for pet owners. Having to watch their little ones go off to war would have been tough, but knowing their little ones were fighting for their country must have provided some comfort. 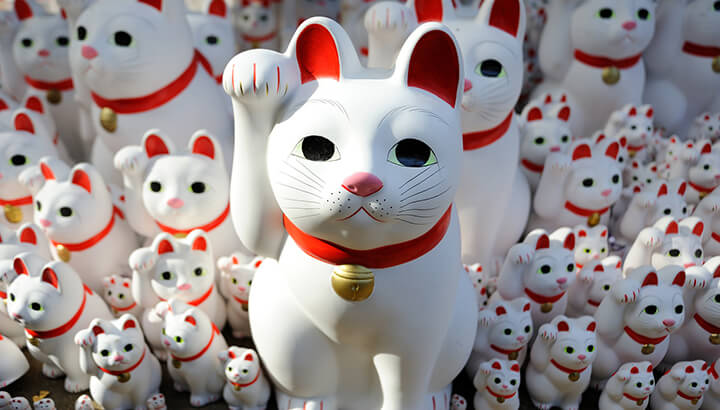 Cats being seen as good fortune in Japanese culture can also be partially explained by the story of the Maneki-Neko. This is a popular good luck charm that you might find in store windows. Most often it is a statue of a cat sitting with one paw raised, kind of saying “hello” or “over here human!”

The origin story of the Maneki-Neko varies depending on who is telling it. In general, it is a tale of a man (sometimes a Samurai) who had been caught in a rainstorm. He saw a cat who made the “over here human!” motion. Curious to see what the cat wanted, the man walked towards the little furry one just before a bolt of lightning struck right where he had been standing. Now the image is thought to bring good luck — or to at least wave human customers into shops.

Tashijormi was hit by the 2011 tsunami, though both human and feline populations were unharmed. Many villagers credit the cats, and the good fortune they are known to bring, for protecting the island during the disaster.

Supplies and emergency materials took close to a week to arrive, but all humans were accounted for. It is fairly difficult to determine if all the cats survived, but there did not appear to be much damage to the cat population.

Perhaps the biggest attraction on the island is the famous “Cat Shrine.” The origin story of the shrine is that a fisherman was nearby when a rock fell on a cat and killed it. The fisherman buried the cat and created the shrine, which is now adorned with many Maneki-Neko statues and similar items. Tourists report that many cats like to hang around outside the shrine, hoping visitors will give them something to eat and a little attention.

There are only two ferries that head out to the island every day from Ishinomaki, Miyagi on the Japanese mainland. If you miss your trip back, you’ll be spending the night on cat island. Each ferry carries just over 30 people, so the island never has to worry about being overrun with too many tourists on any given day.

If you can’t make it to the larger cat island, there are some smaller islands in Japan that have developed similar cat-to-human ratios. Enoshima Island is the easiest one to get to if you are traveling through Tokyo. The Iwai Island is also supposed to have a large cat population as well. That island was originally supposed to host a nuclear plant, but the proposition was heavily opposed by local residents (the human residents that is, though the cats probably weren’t into the idea either). Aoshima is the second most famous cat island in Japan. It is located in the Ehime prefecture.

Some tourists have mentioned that some of the cats are sick or injured. But with such a large cat population and small human population, there really isn’t much veterinarian care available. The village does benefit from an influx of tourist dollars, however. And the kitties benefit from the food visitors bring them every day. So if you love cats, you may want to consider visiting.

Although not specifically mentioned by local government, it probably isn’t advisable to bring a laser pen.