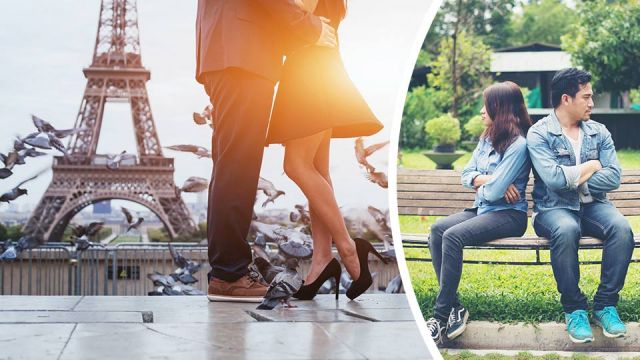 Traveling long-term with your partner is going to be tougher than you think, but the rewards are there. My girlfriend and I met in a foreign country five years ago, and we’ve been traveling and moving from country to country since. We’ve had experiences other couples would only dream (or have nightmares) about, and it can be a little hard to delineate where our travels end and our relationship starts.

It’s not for everyone, but I feel confident saying travel has overall been good for us as a couple. The challenges of the road will put any relationship to the test, though. But hey, whatever doesn’t kill you only makes you stronger, right? These are the ways our travels have made our relationship more solid.

1. Make decisions as a team

I’m terrible at making decisions. I need to see the menu of every restaurant in town before deciding where to eat. My partner is the opposite, and would rather sit down at the first passable diner we come across. Naturally, this difference between us has caused its fair share of problems, but we’re getting better, and finding a happy medium between the two extremes. Travel in particular has forced us to become better decision makers as a team, deciding what’s better for us as a couple instead of as individuals.

It’s a good thing we’re figuring out how to make decisions better, because on the road there are always plenty of decisions to make. Not only that, but often there’s a lot of compromise involved. That could be said for relationships in general, but on the road the issue of compromise only becomes even more acute, sometimes forcing impromptu horse-trading over things you wouldn’t even imagine ahead of time. Practice makes perfect though, and the more we’ve been forced to compromise, the better we’ve gotten at it.

3. Working under pressure makes you stronger

If you’ve ever watched that old reality TV show “The Amazing Race,” then you’ve probably seen plenty of couples totally losing it at each other in the streets of some foreign country.

Yup, I’ve been there, and it sucks.

Clearly, working together under stress isn’t always easy, nor is there an easy fix beyond simple practice and experience. Nonetheless, nothing makes a relationship stronger than getting through tough times together, and learning that you’re stronger than you think you are. Although, one thing that can help is…

4. Get to know what makes each other tick

It’s so much easier to deal with problems you’re prepared for. After spending plenty of time in the tropics, I now know my girlfriend’s temper becomes pretty strained once the mercury gets high. On the other hand, she knows I can’t get to sleep until I’ve double checked all the doors are locked properly. In fact, everyone has some kind of nervous tick, or something that never fails to make them uncomfortable or irritable.

With the pressures of travel, all these little ticks suddenly get put under the magnifying glass, and you don’t have much choice but to get used to dealing with them well. For me, that means finding an OJ before asking my girlfriend if we’re heading to the beach or cranking up the aircon. For my girlfriend, it means nothing happens until I’ve had my morning coffee.

5. Get a good balance of personal space

I love my girlfriend, I really do, but we need space sometimes. This was made abundantly clear when we once made the decision to spend six months living in a tiny, single room unit. This one room that was too small to take more than two steps in any direction became our kitchen, bedroom, living area and both our offices.

Of course, you don’t need a claustrophobic unit to lose a sense of space. Even on the open road, there have been times when we’ve spent weeks on end together, traveling with few moments alone to ourselves. For even the most functional of couples, this is a recipe for disaster. You need time apart.

One or twice a week, I need a solid few hours to myself, and I’d strongly suggest anyone else traveling with a partner do the same. Take a side trip on your own for a day or two. Make an effort to hang out with other people, or just find a cafe to relax in with a newspaper for a morning. Whatever you do, you need space from your partner every so often, and there’s nothing wrong with that.

6. Get better at arguing

If all else fails, then welcome to the argument zone. Every couple argues; if you don’t, then you have a big problem. The secret is to argue well, and I think my partner and I have definitely gotten better over the years, mostly thanks to travel. You can’t afford to sulk for a week if you’ve got a plane to catch tomorrow, so you’ve got to be efficient and effective.

Anyway, the secret to a good argument is to identify the problem immediately, fix it and move on. No he-said, she-said. No dredging up ancient history or getting sidetracked. Fix the problem at hand, and don’t lose pace.

7. The memories never get old

When it’s all said and done, the best souvenirs from any trip are the memories, but they’re even better when you’ve got someone to share them with. Before I met my partner, my travel stories were for barflies. Nowadays, we both have so many good experiences to share together, and a shared history. We’ve both seen each other at our most respectable, and at our very worst. Sure, it means we probably have a few too many inside jokes, but our relationship has become part of the larger adventure.