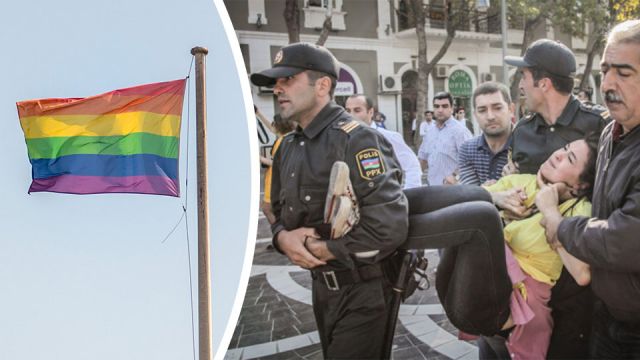 Disturbing reports are coming out of Baku, Azerbaijan, where gay, lesbian and transgender citizens are being rounded up by police, beaten and handed jail terms. At least 46 people have already been arrested and face 10 to 30 days in jail for resisting police.

Javid Nabiyev, president of the Nefes LGBT Azerbaijan Alliance, gave a report on the police raid for the group’s Facebook page. “Everybody [has] fear that they might be arrested anytime on the street,” Nabiyev said.

In the video, Nabiyev describes how people have been targeted by police in the streets, subway stations, LGBTQ-friendly bars or in their own apartments, then forced to undergo medical evaluations. “Many were released only after giving up addresses of fellow members of the LGBT community, who were then in turn arrested and subjected to the same treatment,” said the report.

Nabiyev goes on to say that the Interior Ministry is defending their actions and that these measures were carried out as part of the “framework to protect moral values.” In fact, one political official gave a supportive statement to the local media, saying that the LGBTQ citizens are a “source of immorality, dangerous diseases, and who have been cursed by God” and that “Western circles [are] trying to destruct our national traditions under the name of human rights.”

Another victim of the raids, identified only as “Hasan,” described getting beaten and accused of being a sex worker by police:

Gulnara Mehtiyeva from the Minority Azerbaijan organization told The Associated Press that the arrests started on September 18, and they are “the most extensive raids against representatives of sexual minorities in our country.”

Homosexuality was decriminalized in Azerbaijan back in 2000, yet intolerance towards the LGBTQ community remains strong.

Government says it’s because of STDs

Ehsan Zahidov, a spokesman for the Interior Ministry, said the arrests were sparked by citizen complaints of “disrespect.” Zahidov said, “Of the detained sexual minorities, 16 showed AIDS or syphilis. They are giving sexual services with two or three people a day, spreading the infection.”

However, activists and lawyers working with detainees have a different story to tell. “Not a single one of the cases that I studied is related to sex-industry workers. So this is not a raid against sex-industry workers,” said investigative reporter Khadija Ismayilova on Current Time TV, a Russian-language network run by RFE/RL in cooperation with Voice of America.

As the news spreads across the world, social media users have taken to Twitter to share the latest reports and express concern, but many simply don’t know how to help on a large scale.

Over 100 gay and transgender people are being arrested and tortured in Azerbaijan. Why is no one talking about this pic.twitter.com/T169SAmQND

The reports of #LGBTQ people in Azerbaijan being arrested and abused by authorities are deeply disturbing. 1/3https://t.co/WLwzyQJ0h1

First #Chechnya & now #Azerbaijan. Over 100 LGBT+ people have been tortured & humiliated. Be vocal, protest & ask your MPs to speak out 🏳️‍🌈 pic.twitter.com/I0w72IVwY9

PLEASE PRAY FOR #Azerbaijan ❤️ We need to stand together with our LGBT family. If you know how we can help, tell me! https://t.co/07AO7eTdvT

Stand up for #LGBT people arrested and tortured in #Azerbaijan https://t.co/zFzLrEgixw pic.twitter.com/vzlcTv73xm

How to help LGBTQ people in Azerbaijan

With the power of the internet, there are several ways that you can help LGBTQ people in Azerbaijan:

Being gay is still punishable by death in some places

The number of countries banning same-sex partnerships has declined in the last decade — down from 96 to 72 — but it’s still considered a crime around the world, often punishable by death. According to a report released by the International Lesbian, Gay, Bisexual, Trans and Intersex Association (ILGA), eight countries permit the death penalty for same-sex activity, including Saudi Arabia, Iran, Yemen and Sudan. Additionally, at least 25 countries around the world ban the formation of LGBTQ rights groups.

To help end injustice for LGBTQ folks worldwide, get involved with the Human Rights Campaign, Human Rights Watch and Stonewall.