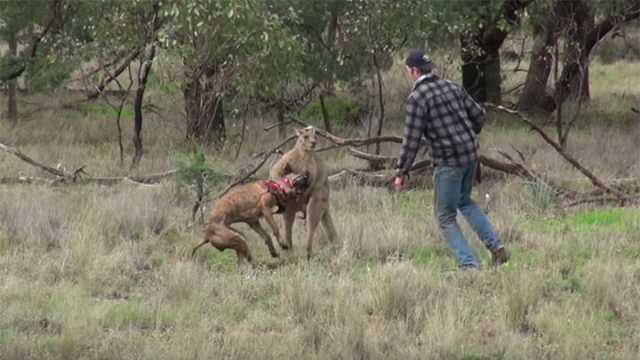 Aussies may be famous for crock tales, koalas, didgeridoos and vegemite, but now it seems they’re also famous for punching kangaroos to protect their dogs. But, was Greg Tonkins, the man at the center of all this attention, actually justified in punching the roo’?

Kangaroos look cute, but they can be vicious, which is likely why one man went toe-to-toe with a large one to save his dog. Tonkins, 34, has since been thrust into the limelight from the viral video of him punching the kangaroo square in the jaw.

Tonkins, who is reportedly an elephant keeper at the Taronga Western Plains Zoo, is seen running towards the kangaroo, who has the man’s dog in a headlock. The kangaroo is seen kicking the front legs of the dog, as the dog tries to escape the kangaroo’s grip. Finally, the dog escapes, and the roo’ turns his attention to Tonkins. In a bold move, Tonkins punches the animal in the face, leaving it stunned before it hops away.

Kangaroos fight to kill when they feel threatened, according to Manfred Zabinskas, owner of Five Freedoms Animal Rescue. So, it lucky for Tonkins that the animal backed off, or this could have been a very different story.

In October of this year, a Kangaroo severely clawed a man and killed the family’s beloved pet dog. Justin Lewis — in an attempt to save the dog — took a broom and tried to scare away the animal. But it accepted the challenge and went after Lewis, reports 9News.

And then in May of this year, another violent attack occurred when a kangaroo launched itself on two women cyclists. One woman was left with a concussion, while the other had to undergo surgery to replace her breast implants, which apparently ruptured in the ordeal. But, the woman claims her implants probably saved her life. “They worked as air bags,” she told MailOnline.

Tomkins in hot water over punch

When the incident occurred, Tomkins was on a hunting trip with his friends looking for wild boars. The trip was organized for a friend who was dying of cancer, according to MailOnline. His employer — Taronga Zoo — isn’t happy with his use of a right-hand punch to redirect the animal away from the dogs.

“Good animal welfare and the protection of Australian wildlife are of the utmost importance to Taronga,” said a spokesperson for the zoo. “We are working with Mr. Tonkins to understand the exact circumstances of the event and will consider any appropriate action.”

Mathew Amor, who organized the hunting trip, told news.com.au, his friend “only stunned” the kangaroo. The rest of the hunting group laughed at Tonkins for “packing such a sh*t punch.” Meanwhile, the video has gone viral with millions of hits and counting. But the zoo isn’t laughing.

You decide, was Tonkins justified in going toe-to-toe with the roo’ to save his dog’s life? Or, should he have just conceded?