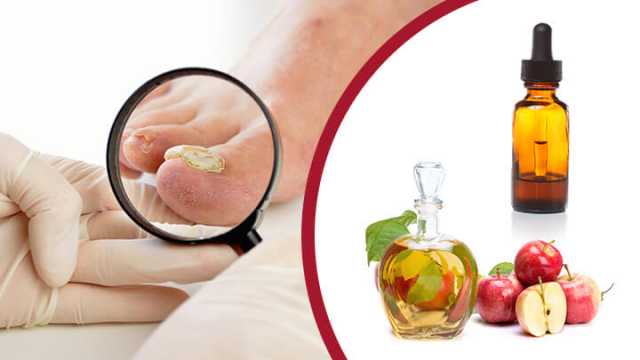 If you’re plagued with white or yellow spots under your toenails, you may have toenail fungus. And, if it runs deeper, nail fungus could discolor, thicken and even distort your nail. But before you grab prescription meds, you’d better think twice. The risks involved in taking oral meds could be devastating. Instead, why not try a natural remedy to rid your toenail fungus? You may even have a useful ingredient right in your kitchen cabinet.

Toenail fungus can be frightening, painful and embarrassing, but you’re not alone. Fungal nail infections are extremely common and very easy to catch. They’re caused by several different types of yeasts or molds that live in the environment, says the CDC, usually entering through small cracks in your nail or the surrounding skin.

You may have nail fungus — also called onychomycosis —  if one or more of your toenails have become thick, brittle, crumbly at the edge, distorted in shape, dull with no shine, or darkened from build-up under the nail. Infected nails can also separate from the nail bed, a condition called onycholysis. If this happens, you’ll feel pain in your toes and even detect a slightly funky odor.

If you’re not sure how you caught this unsightly infection, think pool deck, locker room or even walking barefoot in the same area as someone else harboring toenail fungus. Wearing the same old pair of sweaty shoes or boots every day could also be the cause, suggests the American Academy of Dermatology.

Your doctor may prescribe an oral antifungal drug that you would normally take for six to 12 weeks, according to the Mayo Clinic. Side effects from these medications could include trouble breathing and swelling of the mouth or face. They could even give you hives, rashes, blisters and headaches. Or, you could experience dizziness, nausea, loss of appetite, liver damage, weight gain, fatigue, heart problems, fever and diarrhea. Phew! That is a lot of side effects just to rid yourself of nasty toe fungus. Here are some natural remedies you may want to try first.

One of the wackier treatments for toenail fungus is cornmeal. While there may not be any clinical trials for this remedy, The People’s Pharmacy says it’s surprisingly effective against nail fungus. But you’re not going to eat it — you’re going to put it right on your toes. Add one part cornmeal to two parts warm water in a foot bath. Soak your feet for about half hour. Repeat every other day for one month.

Snakeroot extract comes from plants of the sunflower family. A study conducted at the Biomedical Laboratory of the Instituto Mexicano del Seguro Social found that snakeroot extract was an effective treatment for toenail fungus The study involved 96 participants. Forty-nine were treated with an active compound form of snakeroot leaf extract and 47 were given eight percent ciclopirox topical treatment. Researchers found that snakeroot extract was just as effective for toenail fungus as some prescription medications, when applied topically to affected area. To try it yourself, apply every third day for the first month, twice a week for the second month and once a week for the third month.

Tea tree oil is both antiseptic and antifungal. When applied twice a day it may help treat your nail fungus. In one study, cream containing tea tree oil was applied to toenail fungus. Researchers found that 80 percent of the cases treated were cured of the fungus compared to none in the control group.

If you don’t keep a jar of coconut oil in your cupboard, then maybe you should. Beyond cooking, coconut oil has several beauty benefits, including destroying ugly toenail fungus. One of the medium-chain fatty acids in coconut oil is caprylic acid. It can penetrate the tough cell wall of candida and other fungi. So, without its protective coating, the cells of the fungus dissolve, destroying the infection. Simply apply a thin layer of coconut oil to infected areas and allow it to soak in for at least 15 minutes.

According to the Mayo Clinic, many people have had success with Vicks VapoRub. This may not be alternative medicine, but it’s an inexpensive option. One study published in the Journal of The American Board of Family Medicine found that five out of 18 patients had partial improvement of signs and symptoms. Simply apply a small amount of the product daily with a cotton swab.

One of the best remedies for toenail fungus is apple cider vinegar (ACV). Fungus thrives in an alkaline environment. ACV increases the acidity and balances the pH levels. It also contains antifungal and antibacterial properties, which fight off the bacteria or fungus that cause the infection, helping prevent recurrence.

Mix one part ACV and one part Epsom salts with six parts hot water. Let the water cool enough, but enough that it’s still warm to the touch. Soak feet twice daily for at least thirty minutes to kill fungus. Alternatively, you can pour few drops of apple cider vinegar directly on the infected nail. Allow it to dry completely, and then repeat the application at least twice a day.

Lavender oil has antiviral, antifungal and anti-inflammatory properties, and is also a natural antiseptic. This makes it an effective remedy for toenail fungus, according to Yellow Toenails Cured. Lavender oil is known to increase circulation and stimulate the immune system. This is great for treating nail fungus since the fungus occurs more frequently in people who have weakened immune systems and poor circulation. It can also provide a speedy cure for the fungus.

Apply a few drops of lavender oil directly to the infected nails each night and allow it to soak in while you sleep. To prevent the oil from rubbing off, cover your feet with a pair of wool socks. However, be sure to use natural socks with breathable fibers. Synthetic fibers can worsen the infection. Continue topical treatments for at least three weeks after the infection appears to be gone.

Remember, a few preventative measures can tackle toenail fungus before it sets in. But if you do find yourself afflicted with this fungus, don’t cover it up with nail polish — that will only make it worse. Instead, choose one of the remedies above and go natural!