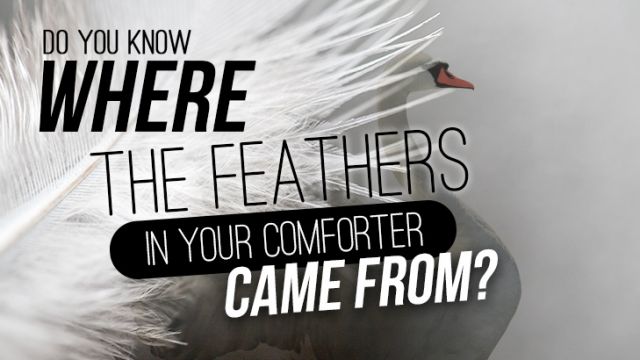 Nothing compares to the warmth and comfort of a down jacket, pillow, comforter or sleeping bag, but find out how the feathers left the bird before making a purchase. Most down for clothing comes from birds slaughtered for food. The feathers are a byproduct. While that has its own ethical dimensions for many people, it’s also true that some manufacturers obtain down plucked from birds that are still alive, and they are plucked multiple times before dying.

Avoid purchasing articles with down obtained through live-plucking by checking the label to see where it originated. Down items made in some countries have a roughly 50 percent chance of coming from live, tortured birds. Certain stores don’t sell down from these sources, so shopping or ordering from them gives you peace of mind that the birds providing your comfort died quickly and humanely. Look for “cruelty-free” labeling on any down product.

Down doesn’t consist of a bird’s outer feathers. It’s the interior feathering, which is light and insulating. Young birds have only downy feathers; the exterior feathers develop with age. Down naturally traps air, protecting young birds from heat loss. Humans have used down for insulation for thousands of years.

Many down items are actually a mix of down and feathers. The latter adds weight and more stability to down articles. Pillows, for instance, generally contain a combination of the two. An exceptionally fluffy and light pillow predominantly consists of down. (A caveat: Down isn’t hypoallergenic; many people can’t tolerate it.)

In the United States, any products labeled “100 percent down” contain only down, while if the item is simply labeled “down,” it may contain down and feathers.

In the United States and much of Europe, the practice of live-plucking feathers from birds is banned. That’s not the case in Hungary, China and Poland — the top down producers — and some other countries. If your down item was made in one of those nations, odds are that the birds suffered excruciating pain.

In live-plucking, a worker holds the goose on its back between his knees and quickly plucks off the feathers while the bird is conscious. The goose is not necessarily killed for food afterward. In Hungarian factory farms, geese are live-plucked for the first time at the age of 10 weeks and then up to six times before slaughter, according to Veterinary Practice News.

In a Swedish documentary about the practice, painful wounds on the birds were stitched by the workers using a needle and thread — and no anesthetic. Some of these same geese endure not only live-plucking but force-feeding to create pâté de foie gras, the fattened liver of the bird sold as a delicacy.

Some well-known companies have taken a firm stance against live-plucking and do not sell such down items. IKEA is among them, as is the outdoors clothing company Patagonia.

If you have the money, eiderdown gives you genuine down without harming any birds. The eider is a duck native to Northern Europe, eastern Siberia and North America. The brown female eider duck plucks her breast feathers to line her nest. After the ducklings have fledged and the nest is abandoned, eiderdown farmers gather the down from the nests. It’s a time-consuming task, so eiderdown is extremely expensive. Still, this luxury item is warm in winter and cool in summer and is exceptionally soft and light.

Eiders nest in protected colonies in their native territories. Well-known colonies exist in Iceland, Scandinavia and Britain, among other places. The eiderdown farmers feed and care for the ducks, but eiders are wild. It’s an extremely limited resource — the annual production of eider would fit in one truckload.

Perhaps it’s just easier to go with a synthetic jacket, pillow or the like. That solves the possible live-plucking issue, but opens up another one. Synthetic down is made from petroleum products, polyester fibers that mimic down’s clustering.

Synthetics are cheaper than down and won’t trigger allergies. Quality synthetics like Thinsulate and PrimaLoft provide excellent insulation and, unlike down, are water-resistant.

If you would rather go natural than synthetic, do some detective work and ensure that your down purchase didn’t contribute to prolonged pain and suffering.