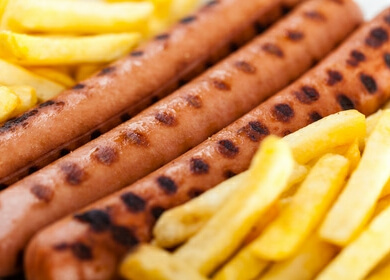 Yet another study confirming the evils of the so-called “Western-style diet” has surfaced. A British research team recently examined the effects of processed, deep-fried, and refined foods on longevity and healthy aging, and the results are not unexpected; consuming a diet laden with these types of foods is likely to lead to poor health over time and an increased risk of a shorter lifespan.

The British study, published in The American Journal of Medicine, examined eating habits against the Alternative Healthy Eating Index (AHEI), a catalogue of diet quality created for the purpose of combatting prevalent health conditions such as diabetes and heart disease. Investigators, led by Tasnime Akbaraly, PhD, derived their data from a compilation of statistics from a study known as the British Whitehall II cohort study, which theorized that if the AHEI is closely followed, it can lead to doubled odds of reversing metabolic syndrome.

Metabolic syndrome has been researched to be a telling indicator of heart disease. Dr. Akbaraly summarizes, “we examined whether diet, assessed in midlife, using dietary patterns and adherence to the Alternative Healthy Eating Index (AHEI), is associated with aging phenotypes, identified after a mean 16-year follow-up.”

Through the analysis of the 3,775 men and 1,575 women from 1985 through 2009, the research team was able to identify chronic disease rate and risk factors. As expected, those who ate a diet high in processed foods, refined sugars and starch, and commercial red meat and dairy products loaded with antibiotics and hormones died sooner and had a plethora of health issues later in life.

The following is a sampling of the absolute worst foods one can eat for breakfast, lunch and dinner. These items are to be avoided at all costs if you do not wish to become yet another “Western Diet” casualty.

The sheer amount of sodium, saturated and trans fats in most commercial sausage biscuit breakfast sandwiches is staggering. There are sometimes as much as 700 milligrams of sodium in a two-ounce serving of processed sausage. Additionally, the nitrites used in their processing have been linked to certain cancers. The bleached flour used in the biscuits does not help, either.

If you’re a coffee drinker, steer clear of the non-dairy creamers, especially with added flavors. They are usually filled with trans fats in the form of partially hydrogenated oils, along with artificial sweeteners such as cancer-linked aspartame. 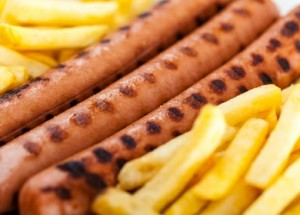 Even if you’re in a hurry, it is worth it to avoid the pre-packaged gas station and grocery store sandwiches. They are a veritable cocktail of trans fats, preservatives, high fructose corn syrup, and a lot of other unpronounceable chemical additives. Furthermore, if they contain lunch meat, they are even higher in trans fat, with a kick of sodium, nitrates and even fat-soluble pesticides, on occasion.

Also, skip the potato chips. Along with being made from empty, refined starch, foods fried and baked at high temperatures are sources of acrylamides – known carcinogens. Dale Hattis, research professor at Clark University, states, “I estimate that acrylamides cause several thousand cancers per year in Americans.”

It is a given that frozen foods are bad for you. They are heavily processed, high in sodium, and contain very little nutritional value. Livestrong.com examined one brand of chicken pot pie, and found that it contained 1,020 calories per serving. This just seems egregious.

Sadly for most Americans, another one of the worst foods out there is pizza – both the delivery and frozen varieties. Aside from the refined starch of the crust and high sugar content of the tomato sauce, the stringy, melty cheese used to top most brands is pretty frightening. A sampling of an average brand (the specific brand name was not disclosed in the survey) found that the cheese contained 64 percent saturated fat, as well as an entire third of the sodium limit we should get per day in a single serving. Commercial pizza cheese also contains ‘modified milk ingredients,’ which are mostly sugar and processed dairy and nondairy compounds.

The sooner that Americans begin making healthier meal choices, the sooner the stereotype of the “Western diet” can change into something that isn’t likely to kill you.