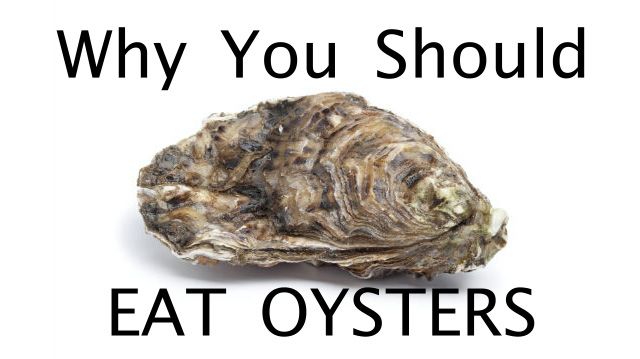 Part of transitioning to a healthy diet is building in lots of nutrient-dense real foods. Nutrient density means there’s lots of value packed into every calorie, as opposed to consuming empty calories. Nutrient-dense foods are more nourishing to the body, and are also more satisfying, preventing overeating.

Oysters are amazing
Oysters are an incredibly nutrient-dense food. They contain lots of omega-3 fatty acids for robust brain and heart health, plus Atlantic oysters are the richest known animal source of zinc. Animal-based zinc is much more digestible than plant-based zinc from nuts and seeds.

Since oysters spend their lives immersed in mineral rich water, they become rich sources of those minerals, including iodine, selenium, and magnesium, along with vitamin A and B-12.

How to buy good oysters
While usually wild species are a better choice with fish and seafood, farmed oysters are actually a better choice for the planet. Farmed oysters feed on matter that would otherwise pollute the waters. According to ancestral nutrition expert Mark Sisson, farmed oysters are a safe nutritional choice, because they live a largely ‘natural’ existence in similar water and consuming similar food that they would in the wild. They may just be attached to a rope or some other structure rather than a rock or reef.

Farmed oysters generally eat exactly what they would in the wild — they filter tiny plants and animals called plankton from the water, and don’t even need supplementary feed from the farmer. In this way oyster farms can help keep waters clear, promoting the thriving of other plants and animals.

The farming process usually involves either harvesting wild larvae or cultivating larvae in hatchery facilities. The larvae are kept floating in tanks of circulating water for a few weeks until they form a tiny immature oyster.

These “seeds” are then transferred to the ocean, where they are sometimes kept in a floating raft on the ocean, which keeps them safe but also allows them to feed on the nutrient-rich ocean water. Once they have reached a sufficient size, they are transferred to a structure where they can grow to their final adult status. The growth process usually takes anywhere from 18 to 36 months.

Oysters generally thrive in clean conditions, and cannot tolerate sewage or toxins. Therefore farms don’t use extra chemicals as part of the cultivation process, and the water tends to be well cared-for by necessity.

The presence of oyster farming increases awareness for keeping waters and harbors clean. Wild oysters on the other hand may have come from polluted coastal waters, and may have been harvested by destructive dredging.

Although some sources point out that wild-caught oysters can contain better levels of nutrients as compared to farmed oysters, this can vary widely depending on where the oysters are collected. As mentioned above, eating wild oysters also necessitates more care in determining their source, as they could come from polluted or unregulated waters.

Sustainability and health guru David Suzuki recommends asking for oysters farmed anywhere in the world, as long as they are produced with a suspended culture system. Be sure to choose oysters with a tightly closed shell as they are cleaner and healthier.

Oysters traditionally have the best flavor during the autumn and winter months. This is because they spawn in spring and summer, resulting in a thinner, less tasty meat. The warmer seasons also encourage more growth of algae and bacteria, which bring toxins that can be harbored in seafood. This is generally not a concern with modern farming, since cultivated oysters are now grown with methods that nullify the effect of the seasons and are strictly regulated for safety.

Experts recommend choosing oysters that are from a source as close to your home as possible, so they will have spent less time out of the ocean water.

Common species of oysters in North America
Many different species of oysters grow all over the world. Industries in different areas choose to focus on oysters which best thrive in that particular habitat. Along the east coast of North America the primary oyster species farmed is the American oyster, which is also known by other names, such as the Atlantic, Malpeque or Eastern oyster. The European oyster is also farmed in the Northeast.

Although these are the large-scale farmed species, you will also be able to find
others from smaller providers.

Protecting oyster sources
Unfortunately more than 85 percent of our wild oyster reefs have been lost due to invasive species, pollution, and acidification of the oceans. One of the worst contributors to the degradation of oyster habitat has been sulphite waste from pulp and paper mills.

Oysters are an important part of the ocean habitat, helping to prevent erosion in shorelines and cleaning the water to help other species thrive. They help remove excess nitrogen and can reduce algal blooms.

We can help protect wild sources by choosing to buy farmed oysters instead!
Different delicious ways to eat oysters

Expert NYC oyster chefs Sandy Ingber and Danny Abrams share the following tips for trying oysters, even if you think they are gross:

Are oysters really an aphrodisiac?
Oysters have a reputation for inspiring diners to heat things up in the bedroom after their meal (a special type of dessert?) While this isn’t supported by scientific studies, the long-standing myth may be founded in the fact that zinc is one of the main constituents of semen, and a lack of it can contribute to impotence.

This may be because zinc acts as an antioxidant preventing deterioration of the sperm and stabilizing their DNA. It seems that the impotence resulting from a lack of zinc is a protective measure to prevent conception with damaged sperm. The body also needs zinc to produce testosterone, which supports the sex drive of both men and women. Oysters are a source of dopamine, too, which can leave us feeling a little “friendlier”!

The body also needs zinc to produce testosterone, which supports the sex drive of both men and women. Oysters are a source of dopamine, too, which can leave us feeling a little “friendlier”!

The Pacific oyster has a high ability to reproduce, and its reproductive parts can form at least 50 percent of its entire meat volume. Perhaps there is some sort of energetic “translation factor” when we consume these virile parts!
The important role of zinc in the body 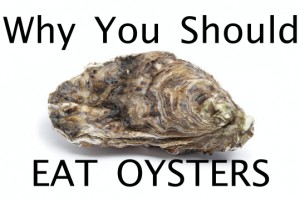 Zinc is the second most plentiful element in the body, after iron. It is used in cells throughout the body for cell division and for cell growth in wound healing. It helps support the workings of the immune system and healthy growth during gestation and childhood.

Interestingly, zinc is also vital for the proper function of our sense of smell and taste. We also need zinc to properly break down carbohydrates.

When zinc is lacking, we can experience frequent illness, poor ability to heal, loss of hair, and skin sores. Oysters are one of the best sources of zinc, but it can also be obtained from other protein-rich foods, such as beef, pork, lamb, or the dark meat of chicken. Nuts and legumes also contain zinc, although other plant foods, such as fruits and vegetables are usually poor sources. The zinc from animal foods are much more usable by the body.

Six raw oysters contain approximately 32 milligrams of zinc, while cooking reduces the content to about 27 milligrams. The government currently recommends a minimum of about 10 mg a day, so a healthy consumption of red meats and oysters a few times a week will cover your nutritional needs.

Enjoy oysters as a nourishing, sustainable and mood-elevating treat.