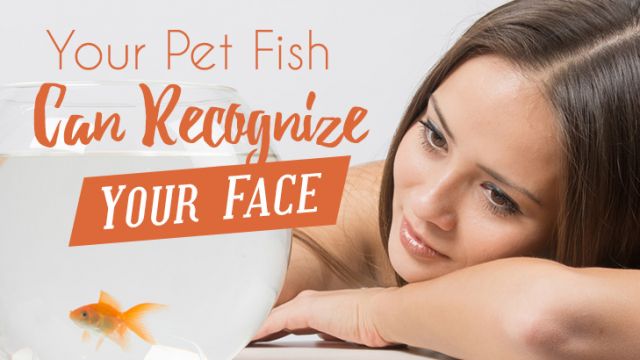 Watching tropical fish in an aquarium can be hypnotizing. A new study has found that while you’re watching them, they may be watching you back.

The study, recently published in Scientific Reports, found that one species of tropical fish, the archerfish, can recognize one face from another with a high level of accuracy.

Previously, scientists believed it was highly unlikely that fish would recognize faces because they don’t have a neocortex, the area of the brain that gives mammals the ability to recognize the subtle nuances in faces.

Their study focused on the archerfish, known for spitting jets of water at aerial prey with sharpshooter-like accuracy, although scientists now believe it’s likely that other fish can recognize faces, too.

Researchers at the University of Oxford in the UK and the University of Queensland in Australia made the discovery by showing fish pictures of faces on a computer monitor above their aquarium. Food was used as a reward to train the fish to spit water at familiar faces.

While it normally would be considered rude (among humans) to spit at a face, the fish got the faces they spat on correct 81 percent of the time. The archerfish’s accuracy rate got even better when researchers used a set of black-and-white images that appeared more standardized than the color images they first tested. Their accuracy shot up to 86 percent.

The study shows that although the archerfish has a small, simple brain, it’s still possible for animals to perform complex and demanding visual tasks.

“Being able to distinguish between a large number of human faces is a surprisingly difficult task, mainly due to the fact that all human faces share the same basic features. All faces have two eyes above a nose and mouth, therefore to tell people apart we must be able to identify subtle differences in their features,”  said the study’s lead author, Dr. Cait Newport, Marie Curie Research Fellow in the Department of Zoology at Oxford University.

“If you consider the similarities in appearance between some family members, this task can be very difficult indeed.”

“It has been hypothesized that this task is so difficult that it can only be accomplished by primates, which have a large and complex brain. The fact that the human brain has a specialized region used for recognizing human faces suggests that there may be something special about faces themselves,” she said.

“To test this idea, we wanted to determine if another animal with a smaller and simpler brain, and with no evolutionary need to recognize human faces, was still able to do so,” Dr. Newport said.

This isn’t the first study that indicated fish have facial recognition abilities. In October, the same research team found that Ambon damselfish can recognize other fish in their species because of their facial patterns.

Only animals who can see ultraviolet wavelengths have the ability to see facial patterns. The scientists also found that the lemon damselfish has the same ability.