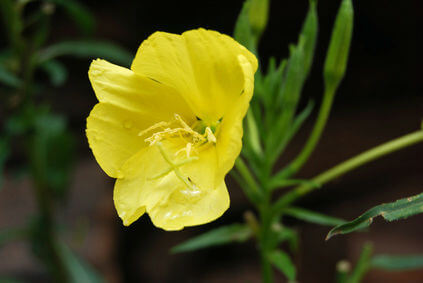 The primrose is a native plant found throughout most of Europe with over 350 different species existing worldwide. This five-petal flower can range in shades of light cream to a deeper yellow and often grows in the woods or along hedgerows.

Most plants begin to flower in April and last through May. And while it is best to harvest primrose while it is in bloom, doing so will come with a hefty price tag in the U.K. as it is illegal to harvest wild primrose in the country that holds it in such high esteem.

Throughout history the plant was thought to have a sedative effect, particularly on hyperactive children. The renowned 16th century herbalist, Gerard wrote of the fragrant flower, “primrose tea drunk in the month of May is famous for curing the phrenzies.”

The entire plant is known to offer this sedative effect. Teas, as Gerard wrote of, can be made from the petals and leaves while infusions are often made from the roots themselves. In ancient times the flowers were often incorporated into several dishes including “Primrose Pottage” and ground primrose powder was used for flavoring.

Along with its calming effect, primrose was a common remedy for gout, paralysis and muscular rheumatism in the earliest days of medicine. Pliny himself often wrote of the power of the primrose to cure such ailments.

The plant contains salicylates, which are a main ingredient of aspirin and have powerful anti-inflammatory effects. Often an infusion of the root, which should be harvested after two or three years, can be a natural option for headache relief, cough and other bronchial problems.

The seeds of the evening primrose have often been touted for their anti-inflammatory effect as well. The seed oil in particular is high in fatty acids and has been used in the treatment of PMS symptoms, arthritis and the skin condition eczema.

While minimal research has been performed, one study concluded that the gamma linolenic acid in primrose seed oil does aid in battling the inflammation associated with rheumatoid arthritis.

Aftere a review of over 30 human-based studies, evening primrose oil was found by researchers to be an effective treatment for multiple skin conditions including eczema and dermatitis when applied topically.