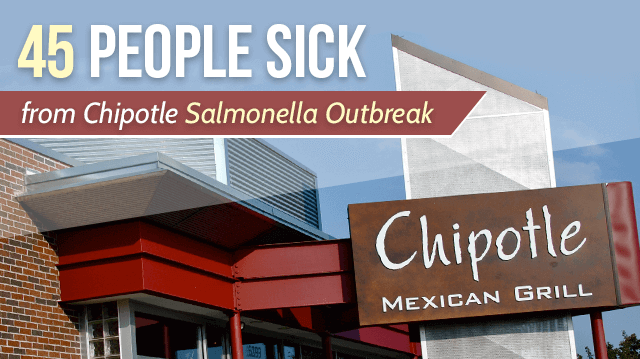 The source of the salmonella has not yet been identified by Minnesota health officials. Their investigation continues as 17 suspected Minnesota Chipotle restaurants come under the microscope.

Currently, 45 cases have been reported and ages range between 15 to 67 years old. Five people have been hospitalized, according to a statement issued by the Minnesota Department of Health.

According to Dr. William Schaffner, an infectious disease expert at Vanderbilt University Medical School, health investigators are hunting down the source of the salmonella outbreak in an attempt to determine whether the food was contaminated before arriving at the Chipotle restaurants, or if the contamination occurred at the restaurants.

Chipotle’s Communications Director, Chris Arnold issued a statement saying, “The safety and well being of our customers is always our highest priority.”

Doug Schultz, a Minnesota Department of Health spokesman shared the comments of the department’s foodborne illness supervisor noting that this quickly spreading salmonella outbreak is “one of the largest he’s seen in 20 years.”

In the midst of the investigation, Minnesota health officials also stated that they do not believe there to be any further risk of salmonella infection at any of Minnesota’s Chipotle restaurants. Hmm… an interesting statement considering they have not yet narrowed down the source of the salmonella outbreak.

With the number of infections from the salmonella cucumber outbreak increasing nationwide — two dead and over 300 people sick in over 30 states — one wonders what is happening to our food in America? Although the Minnesota salmonella outbreak has been so-called “contained” to the state, the bigger picture is not being addressed.

Here’s an interesting note: When searching for recent studies on salmonella, most research papers stop at the beginning of the 21st century. The FDA is also struggling with implementing the new regulations for food safety in America, as outlined in the Food Safety Modernization Act (FSMA), which the FDA celebrates as the, “most sweeping reform of our food safety laws in more than 70 years.” The FSMA was signed in January 2011, so why all the salmonella and E. coli outbreaks this year?

Unfortunately, the FDA inspection percentage on imports is low, hovering around two percent last year, and government funding for the FSMA fell short by tens of millions of dollars. Their proposed budget for the 2016 fiscal year will cover, “The final FSMA rules for produce safety, preventive controls in food and feed facilities, and import safety are all expected to be issued by late 2015,” according to the FDA’s fiscal year budget page. “Without this investment in 2016, FSMA implementation will be disrupted and delayed.” This could mean more salmonella outbreaks, and do funds always go to the proposed programs? 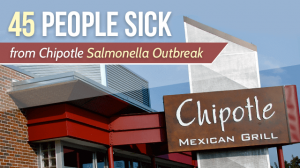 Can all your food be grown and purchased within 100 miles of your home? Salmonella outbreaks are often associated with imported products as well as conventional farming and livestock production. Eating local, organic food is one way you can ensure a healthier, less toxic product.

There is absolutely no reason not to eat local. A recent 2015 study published in Frontiers in Ecology and the Environment found local food sources to have substantial potential, meeting in excess of 90 percent of the national food demand. The study also stated that 80 percent of people could easily consume food grown within 50 miles of their homes.

Where do you get your food?