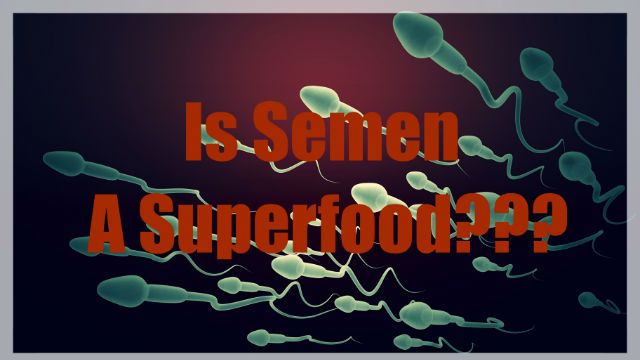 Ok, if you made it this far into this article, past the title at least, you must be partially interested in learning more, right? Don’t be grossed out – know that we are just passing along some information that we have found, not taking a stand one way or another. We are just reporting on what some are calling nature’s true superfood: human semen.

Squids do it, would you? Would you consume male ejaculate like it was food to fuel your body? According to a study, numerous female species including squid, carrion flies, picture wing flies and some leeches consume sperm for their own health benefit. But how exactly does human male ejaculate stand up against other species? As it turns out… it is pretty darn healthy.

When we talk about superfoods we are talking about foods that are nutritionally dense – they provide a large number of nutrients for the body. If you do an Internet search for superfoods you will find lists upon lists of foods that have been declared “super.” A good rule of thumb is to remember that any food in its natural state will offer more nutrients than anything that has been processed.

Semen, although not traditionally known as a food, has been recognized by some for its “superfood” qualities. According to Columbia Health, human sperm contains fructose, sugar, water, vitamin C, citric acid, potassium, copper, enzymes, protein, zinc and more.

Seminal plasma also includes testosterone, estrogen, prolactin, opioid peptides, serotonin, oxytocin, melatonin and norepinephrine. Pretty impressive, right? Sounds like a souped-up protein shake… but this may not be enough to convince most people to make it an integral part of their diet.

With all of these amazing benefits, it is not surprising that someone has written a book – a recipe book, Natural Harvest, at that – with semen as the main ingredient. According to the author, semen is not only highly nutritious, but also has a wonderful texture and incredible cooking properties. Paul “Fotie” Photenhauer calls semen, “a neglected food that can add an interesting twist to any food.”

In fact, Photenhauer is so passionate about sharing his interest in semen that he has written a second book, titled, Semenology: The Semen Bartender’s Handbook. This book gives recipes for some of our favorite mixed drinks with the added bonus of semen.

If you are a little grossed out, Photenhauer reminds us that people eat all sorts of strange things and often don’t think twice. Foods such as eggs, the menstruation of chickens, and milk, the mammary excretion from cows, for example. At least, he says, semen is fresh, and you know where it comes from!

Perhaps you would rather stick with the better-known superfoods such as kale, blueberries or broccoli – but, if you get adventurous… enough said!