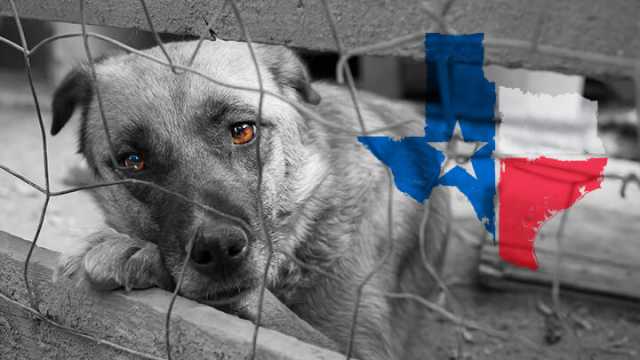 For years, all neighbors heard was incessant barking from the 20-acre property next door. But now the Liberty County Sheriff’s Department and Houston SPCA have teamed up to rescue 150 dogs, six cats and one horse from Puppy-Dogs-R-Us — a self-proclaimed animal rescue property in Dayton, Texas.

When the SPCA workers arrived at the property, they found appalling conditions. They encountered animals surrounded by their own waste, standing on top of kennels to avoid flooded floors. They also found animals confined to rusty wire cages stacked on top of one another, some in dark sheds without heat.

“That place was horrendous,” said Capt. Ken DeFoor of the local sheriff’s office. He noted that the animals had been “virtually abandoned on the outskirts of the property without food, clean water, care or human interaction for weeks.”

The veterinary staff at the Houston SPA are now evaluating and caring for the animals, many of whom have diarrhea, hair loss and other medical issues as a result of being neglected. Permanent custody of the animals will be determined by a judge once the case moves to a civil hearing next week. Most likely, as is typical in animal cruelty cases, the SPCA will be granted custody of these animals so they can be adopted.

“What we found today at this facility is unacceptable,” said Tara Yurkshat, the vice president of animal welfare at the Houston SPCA. “We hope we are awarded custody so we can continue their journey towards health, happiness and finding them new homes.”

Why did it take years to rescue the animals?

Prior to the seizure, authorities received several complaints from neighbors.“You put up a fence so you don’t see it, but you still have the animals coming through all the time,” said neighbor Robin Summers to KHOU news.

Officials started investigating the property in 2009. They sent several warnings to the owners, urging them to heed the state’s animal welfare requirements. The owners refused to comply, though the reasons why are unclear.

Cases like this are not uncommon. Massive animal rescues take all kinds of resources — staff, rescue equipment and veterinary supplies. The Houston SPCA alone responds to more than 7,000 animal cruelty cases every year. Each case can take an immense amount of time and effort. The faster people report animal cruelty, the better.

What to do if you suspect animal cruelty

If you suspect animal cruelty, here are the steps to take so that the issue can be handled as swiftly as possible. The SPCA recommends the following steps:

How to help rescued animals

This story is just another example of why it’s always best to adopt pets from a shelter — there are countless animals in desperate need of families who will care for them. Instead of buying purebreds from a puppy mill or paying thousands for a show-quality animal, please give abused animals a chance to have a safe, permanent home.

If you can’t adopt pets from your local shelter, consider supporting them in others ways. You can become a volunteer, provide supplies or support organizations financially. If you’d like to support the group who helped rescued the animals in this story, donate to the SPCA here.