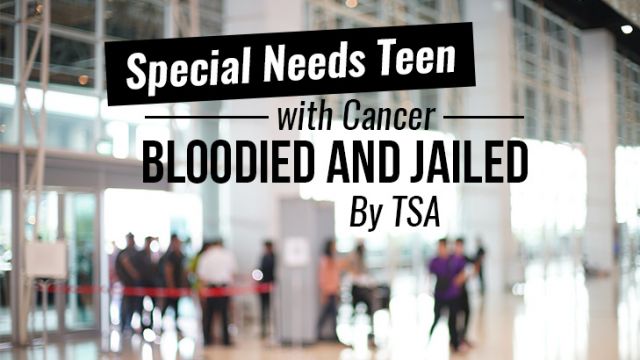 A 19-year-old partially disabled cancer patient was roughed up and bloodied by TSA officers on her way home from treatment at St. Jude’s hospital. Now the teen and her mom are suing the TSA over the assault.

Radiation damage left teen with partial disability
Hannah Cohen, 19, was flying home to Chattanooga, Tenn. on June 30, 2015, after receiving cancer treatment at a Memphis hospital. For the last 17 years, the Cohens have traveled between  Memphis and Chattanooga so that Hannah could receive brain cancer treatment at St. Jude Hospital.

Damage from radiation and removal of a brain tumor has left the teen partially disabled, limiting her ability to speak, walk, stand, see, hear, care for herself, learn and work, think, concentrate and interact with others, according to court documents. But even before she had brain tumor surgery, she already had a physical and mental impairment that substantially limited one or more of her life activities, the lawsuit claims.

Teen confused and reluctant to comply

The TSA is accused of injuring the disabled teen when she failed comply with orders at a security checkpoint. “They wanted to do further scanning; she was reluctant,” Shirley Cohen, the teen’s mother, told WREG. “She didn’t understand what they were about to do.”

“She’s trying to get away from them, but in the next instant, one of them had her down on the ground and hit her head on the floor. And I looked and there’s blood everywhere,” Cohen said.

Not surprisingly, the event has caused Cohen “extreme emotional injury as she watched the personnel assault on her daughter.” Included in the suit is the Memphis International Airport Police Department for “arresting her for no cause.”

Following the incident, the TSA released a short statement arguing that “passengers can call ahead of time to learn more about the screening process for their particular needs or medical situation.”

On the night Hannah Cohen should have been celebrating the end of her cancer treatment she was locked away in jail — bloody and terrified. Authorities have since thrown out the charges but that hasn’t stopped the Cohens from filing a lawsuit against the TSA and airport police for $100,000.

The TSA used aggressive force unbefitting the situation. But there’s a bigger problem here, beyond the officers’ callous, guilty-until-proven-innocent attitude. Clearly the TSA has a real problem separating the innocent from those who actually pose security threats. Maybe it’s time to reevaluate their hiring and training procedures.