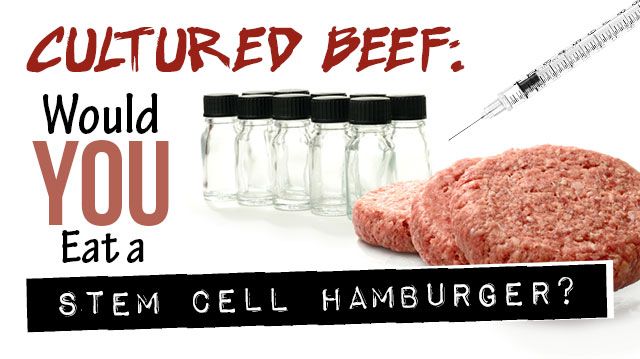 In late 2013, we reported on the development of a “mystery meat” that was getting ready to hit the market. Researchers at Maastricht University in the Netherlands, led by Dr. Mark Post, created a burger patty from “cultured beef” using bovine muscle cells.

In January of this year, Dr. Post and his team presented their research at the EmTech Asia conference in Singapore. Their continuing goals are to make the cultured beef taste better and make it affordable to produce. Post claims his lab-grown meat provides a sustainable solution to the world’s “protein crisis.”

Sergey Brin, co-founder of Google, initially provided $330,000 to fund the project; no doubt the cost of refining the technology has grown exponentially since then, and one wonders how this money could have been better spent.

A proposed “solution” to a complicated problem

At the EmTech conference, Dr. Post explained that the United Nations expects worldwide demand for meat over the next several decades to exceed existing supply. Post also mentioned that as livestock emit methane gas into the atmosphere, the increased demand for livestock will cause an increase in pollution.

In support of the research, Post stated, “The world is facing a protein crisis, and it’s implausible that we’re going to eat insect protein or all turn vegan so this could be a helpful solution.” He also added that using cultured beef instead of livestock could cut down on agricultural space requirements by 99 percent.

Post doesn’t want to stop at beef, either. He added:

“Technically, any species with stem cells in muscles can be used to recreate meat. We’ve worked on pork, others are working on fish and chicken but we’ve been focused on beef because cows have a bigger environmental impact.”

As far as GMOs are concerned, Post believes that genetically modifying living cow cells is not the same as modifying fruits, vegetables, and grains, because there is no risk of an invasive species being developed through cross fertilization.

Does this sound too good to be true? Well, there may indeed be some considerable drawbacks.

The problems with the “solution”

As much as Dr. Post wants to assure investors and potential consumers that cultured beef isn’t your average GMO, the fact remains that it is, indeed, a genetic experiment, and contains a whole host of chemicals.

First the cells are cultured with growth-promoting chemicals. Then, they are coagulated into petri dishes. Next, the coagulated strips are frozen and made into pellets, which are then defrosted and formed into patties. They contain no fat, and are white as they grow.

Aside from the starting cells, there is nothing natural about this process. Some health experts, including Dr. Fred Vagnini, the medical director of Heart, Diabetes, and Weight Loss Centers of New York, worry that protein DNA changes due to genetic engineering could result in carcinogenic compounds being formed.

Is this really the best solution to the “protein crisis”? As Professor Tara Garnett of Oxford University states:

“We have a situation where 1.4 billion people in the world are overweight and obese, and at the same time one billion people worldwide go to bed hungry.”

Looking at it this way, the problem becomes much less about shortage and more about distribution.

How we can remedy the “protein crisis” in a healthy way

According to Dr. Post, “We are a species designed to love meat.” He’s not wrong. However, are we really willing to sacrifice health, and get so far from the natural source that we’ll pay to eat lab-grown burgers filled with chemicals? There has to be a better way.

First of all, we could eat less meat. This doesn’t mean giving up meat — it means we could enjoy real, healthy, grass-fed meat in moderation, along with nutritious, whole fruits and vegetables. We could also eat more plant protein, and save the meat for certain nights of the week, or special meals.

Also, the hundreds of thousands of dollars that are being pumped into the cultured beef project could, theoretically, go towards sustainable, organic farming. If every homestead with enough yard space grew their own vegetables and legumes, and factory farm space was converted into space used to humanely raise animals, we may just have enough.

Finally, let’s not forget that we could attempt to evenly distribute food where it is needed, not just to those who demand an extra 16-ounce steak.

Does this sound like an idealistic dream? Perhaps, but it’s one that would be much more beneficial for the planet should it become reality.

Tanya is a writer at The Alternative Daily with a passion for meditation, music, poetry, martial arts, and overall creative and active living. She has a special interest in exploring traditional Eastern remedies and superfoods from around the globe.