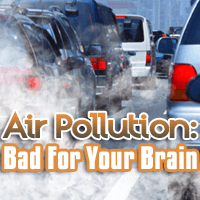 Pollution is ubiquitous in cities, but few rival Mexico City, one of the most smog-filled places in the world. Air pollution is known to cause asthma and other respiratory ailments, even heart disease. But it was still a leap when neuropathologist and toxicologist Lilian Calderon-Garciduenas suggested that it might affect cognitive function–namely memory and learning.

After all, the brain is walled off from potential harm by the blood-brain barrier–tightly bound cells that restrict the passage of particles from the bloodstream into the cerebrospinal fluid bathing the brain. But Calderon, who works both at the University of Montana and Mexico’s National Institute of Pediatrics, has found that the blood-brain barrier is not as impenetrable as once thought.

She recruited healthy children from Mexico City and nearby Polotitlan, where the air is much cleaner. After two years, Calderon was shocked to find that the Mexico City children lagged significantly on tests of memory and learning. MRIs revealed that about half of them had brain lesions similar to those found in Alzheimer’s patients.

“People living in mega-cities do not have an intact blood-brain barrier,” she says. “These lesions, they are leaks.”

Severe air pollution, Calderon finds, leads to neuroinflammation and damages the brain’s white matter. There’s evidence that particulate from industrial smokestacks, car and truck exhaust, tobacco smoke, and other sources may be small enough to access the brain directly through neurons in the nose.

Another recent study, at the University of Ohio, found that mice exposed to particulate matter show not only sensory, memory, and learning impairments but also signs of depression.

Although pollution appears to cause measurable harm to the brain, Calderon does not believe that Mexico City’s kids are destined to develop a severe neurodegenerative disease. They may be at higher risk, but exercising the mind can mediate damage that is otherwise beyond control.

“There is a lot of plasticity in the brain,” Calderon emphasizes. The child whose parents read to him will fare better than the child left to sit in front of the TV all day. “You make new connections, new synapses. But if you are not using your brain, you cannot compensate,” she notes.