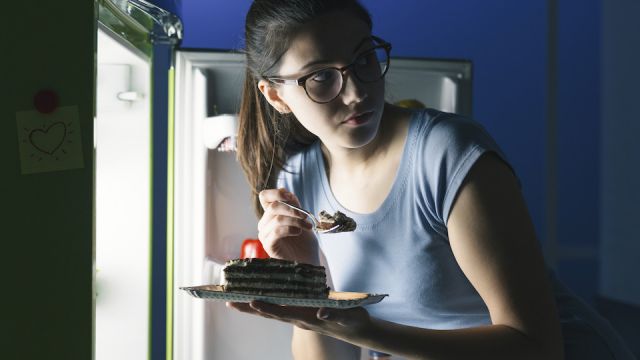 Do you find yourself digging into that tray of brownies or gobbling up a bowl of ice cream in the wee hours of the morning? Admit it, you are a nighttime food junkie, aren’t you? You may be surprised to learn that there is a good reason for your late-night binging and also a way to end this waist-expanding dilemma.

According to Erin Hanlon, a behavioral neuroscientist at the University of Chicago, being sleep deprived is what pushes the late-night eating party to happen. You crave sweets and salty things…a.k.a., junk food when you don’t get enough sleep.

Way, way back in history, our ancestors used to dig in the dirt for starch loaded tubers, forage for sweet berries, and feast on fatty fish. A lack of sleep triggers our ancient desire for rich, sugary, and fatty foods. However, you aren’t going out to the local lake and catching a fish at 3 a.m., you are feasting on chips and twinkies instead, and that’s the issue.

“Evolutionarily speaking, it was a big deal to have a high carb, high fat meal, because you didn’t necessarily have those all of the time. If you think back to feast or famine times, having a meal with lots of carbs or fat was something that your brain would say, Hey, we want to have that it’s only the last bit of humanity that we have been able to have food around the clock or food that is high in saturated fats and high in carbs. And our brain has not evolved as quickly as the food choices that have become available.”

There are two hormones that control our hunger, leptin, and ghrelin. Leptin suppresses appetite and helps with weight loss while ghrelin is all about the gain!  This fast-acting hormone triggers hunger and leads to weight gain.

When you don’t get enough sleep, research shows that levels of ghrelin skyrocket and leptin nosedives. This results in an increase in hunger. However, this alone does not explain why you crave junk rather than a big hearty salad at 3 a.m.

To fully understand the junk food cravings, we need to take a look at the endocannabinoid system. This system has the job of keeping our body in balance and regulates everything from sleep to appetite, and even inflammation, pain, and more.

Endocannabinoids bind to the same receptors as THC, the active ingredient in marijuana. This is what causes the munchies!

“We know that you can infuse endocannabinoids into specific regions of animals’ brains and make them eat. They will eat specific things, more palatable things. They will choose sucrose over saccharin, despite the fact that in theory both taste the same, but the sucrose has more carbs.”

Researchers think that the endocannabinoid system is what turns on the craving for sugary, fatty, and starchy foods in the wee hours of the morning. And, to no surprise, sleep deprivation makes things worse.

“We know that you can infuse endocannabinoids into specific regions of animals’ brains and make them eat. They will eat specific things, more palatable things. They will choose sucrose over saccharin, despite the fact that in theory both taste the same, but the sucrose has more carbs.”

In the study, it was found that people who were sleep-deprived reported higher levels of hunger and also had elevated afternoon concentrations of 2-AG compared to those who slept well. The sleep deprived group had a hard time controlling their urges for high-carb and high-calorie snacks.

Not only does a lack of sleep appear to drive poor food choices late at night, but it also causes other things to go awry. The body is designed to sleep, to slow down and enter a state where healing and restoration can happen. Without sleep, everything is impaired from physical health to emotional and mental wellbeing. The best thing you can do for yourself is to make sure that you are getting at least seven hours a night of uninterrupted sleep. Anything less than this will end up causing issues like possible late-night snacking and more!