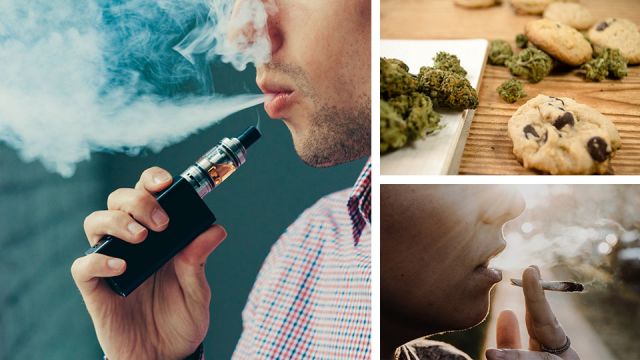 At one time the only methods for ingesting cannabis included joints, bongs and the occasional weed-laced brownie. But now due to the number of people revisiting cannabis, or using it medicinally, we need to discuss the best and safest ways to ingest marijuana. Today there are more options than ever. Here are some of the best ways to ingest cannabis.

For many people, edibles are fast-becoming the preferred method for ingesting marijuana. Here’s why. Unlike smoking marijuana, whereby cannabinoids enter the body through smoke, edibles introduce cannabinoids through the gastrointestinal tract. Edibles are a discreet and convenient way to dose medication, particularly for anyone who can’t tolerate smoke.

But while ingesting edibles is often preferable to smoking pot, the effect can differ from person to person. The high you get from edibles tends to be more relaxing than the high experienced through smoking. Edibles give more of a “body” high rather than “head” high.

How to eat and dose responsibly

Smoking weed generally affects a person immediately. But, it also diminishes faster. Your high lasts between 90 minutes to four hours depending on the types of cannabinoids and potency of strain. Edibles, on the other hand, take longer to produce effects — about 20 to 60 minutes. So, it’s for this reason that edibles can be risky if dosing is not monitored carefully.

Edibles come in a variety of baked goods, candies and chocolate bars. Some are made to contain up to 100 milligrams of THC. Obviously, these are used for multiple servings. Other edibles contain lower amounts of THC like five or ten milligrams. For the beginner, start with smaller-dosed servings. Too much THC and you may experience a temporary increase in heart rate or a sense of paranoia, suggests Consume Responsibly.

Your weight, gender and even metabolism contribute to how fast edibles will affect you. Don’t eat edibles on an empty stomach. The effect will intensify. If you feel like you’ve gone overboard, don’t panic. Symptoms usually diminish within a few hours. So, stay calm, hydrate and eat plenty of food.

Cannabis-infused butter, also known as “cannabutter,” is great for making edibles. But infusing butter properly can be tricky. For THC to properly decarboxylate (change between acid form to psychoactive form) cannabis needs to be heated low and slow. So, you’ll need to simmer your cannabis at a temperature of 200 to 250 degrees Fahrenheit for a longer period of time. This ensures that your cannabis does not burn off active cannabinoids.

2. Cover and let simmer on low for eight to 24 hours. Stir occasionally. The longer you let the cannabis simmer, the more cannabinoids will infuse into the final product.

3. After simmering, use a cheesecloth or fine mesh strainer to strain out all plant product from the mixture into a glass jar. Squeeze or press the mixture to get as much liquid from the cannabis. Discard leftover cannabis.

4. Cover and refrigerate the liquid until the butter is hard.

5. Once hardened, you’ll notice the butter has separated from the water. Scoop or lift infused cannabutter from the water and place in a sealed container. Throw away remaining water.

6. Allow the cannabutter to sit at room temperature to soften. Don’t use a microwave to soften the butter.

When adding cannabutter into a recipe or on toast, begin with small amounts. Unfortunately, it does take trial and error to determine how much of a dose works best for you. Just remember: it can take up to one hour to feel the effects. Use this calculator to help you determine your dose.

Kicking it old-school with joints and bongs may not be the best way to ingest marijuana. Vaping provides a healthier alternative to smoking marijuana. And some say it feels better on the lungs than smoke.

Vaping is the act of inhaling vapor produced by a vaporizer or vape pen. Housed with battery-powered heating elements, vape pens vaporize cannabis oil, without smoke.

Due to its discreet nature, vaping continues to grow in popularity. In addition, it’s often preferred over smoking because many believe that vaping quashes that negative stigma associated with smoking joints. Unlike smoking, vaping doesn’t surround you with the smell of burning weed.

The jury’s still out on whether vaping is safer

But, just because it’s a more healthful alternative to smoking, that doesn’t mean it’s completely harmless. The problem is, cigarette smokers often develop permanent lung damage as they age. But when it comes to vaping, the jury’s still out on whether it may cause long-term damage.

The concern with vaping seems to surround e-cigarettes, particularly the chemicals used to flavor e-cigarette liquids. A study from the University of Louisville in Kentucky, reported by Medical News Today, found that flavorings like cinnamon and citrus could impair the function of heart muscle cells. Research also points to e-cigarette increasing cardiovascular risk and abnormal activity, but studies suggest that nicotine in e-cigarette liquids is the likely cause.

Similarities between e-cigarettes and vape pens

E-cigarettes are everywhere these days — bars, restaurants, work and even public transportation. A portable vape pen can easily pass as a high-end e-cigarette.

E-cigarettes have a battery-powered heating element that vaporizes the liquid, containing nicotine. Vape pens have the same technology. But, instead of nicotine, vape pens work with concentrated cannabis oils, wax or dry-herb. The coils heat the oil, wax or dry-herb to approximately 400 degrees Fahrenheit — just before combustion. This allows you to inhale pure vapor without the damaging toxins associated with actual smoke.

The big difference between using a pen and a traditional vaporizer is simply portability. Traditional vaporizers work best in the home, and over the years they’ve evolved into quiet, energy efficient, desktop units. Vaporizers deliver vapor by either whip or balloon. Some models can do both.

To use a whip, you must position yourself next to the vaporizer to reach the mouthpiece. Some units allow you to attach a balloon to the vaporizer. A built-in fan blows vapor into the balloon. It’s then detached and can be passed around.

While vape pens may be used at home or out in public, the chamber is small and the battery life limited. So, depending on your marijuana use, you may need to refill and recharge more often.

In the end, which method is best is really up to you. Smoking, the most common method of cannabis consumption, may not be the safest but it is the fastest way to get THC into your system. Vaping may be the safer, but more conclusive studies are needed. Edibles, providing your dosing correctly, seems to top the list as one of the best ways to ingest marijuana. Happy baking!