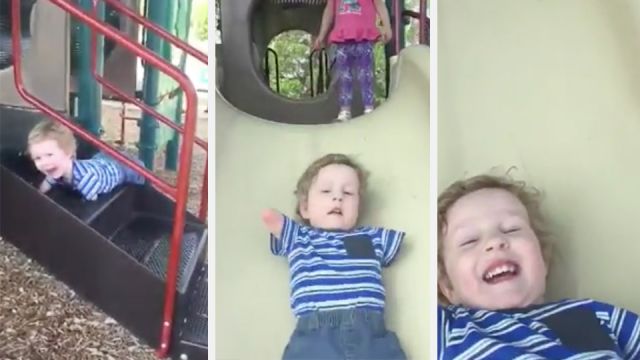 Three-year-old toddler Camden Widdon, who was born with no hands or legs, has been captured on video climbing up to a slide all by himself. The video has gone viral — check it out for yourself.

His mother, 22-year-old Katie Whiddon, posted it in hopes of showing the world that her son doesn’t let his disability get in the way of doing what other children do. The woman talking in the background is Camden’s grandmother, Karen.

Camden has a rare disorder called phocomelia syndrome and amelia. This disorder involves malformation of limbs, and amelia is a birth defect in which a baby is born without limbs. Previously, Camden went viral in a video where he gave a pacifier to his little brother.

His mother Katie said, “We just thought it was funny that it went viral. And so I posted that to show that he can do like way more things than just put a pacifier in his mouth.” Many social media users praised the boy’s determination and his family for encouraging his independence.

“I know that most people look at Camden and think, poor child. But when he gets comfortable in his surroundings and starts doing things on his own, everyone always gathers around to watch,” said Katie.

The mother usually posts other ways of how her son Camden overcomes his disability on her blog. Check it out here.