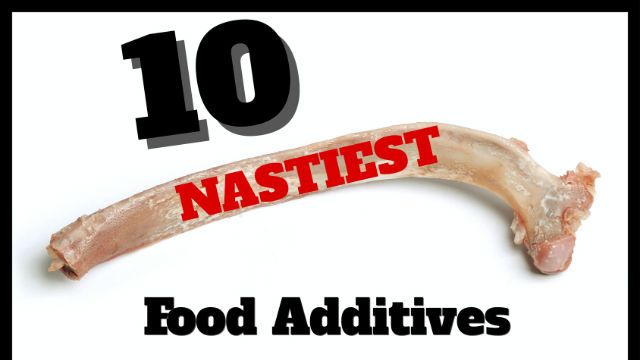 We’ve said it before and we’ll say it again: processed foods are absolutely terrible for your health. Not only are they manufactured in such a way – usually at extremely high temperatures – that the original nutrients in the food are largely zapped, they also contain an array of unsavory additives.

While there are hundreds of preservatives, emulsifiers and other ingredients added to processed and packaged foods, the following are ten of the most common, and most nasty, that these foods feature.

Aspartame appears in many foods and beverages labeled as “sugar free” and “diet,” and is widely believed to be the most dangerous artificial sweetener on the market. It is grown from genetically modified E. coli cultures, composed of an isolated amino acid (the consumption of which is dangerous for your body), and has the characteristics of a neurotoxin. Early research on aspartame found that it ate holes in the brains of rats.

This sweetener is responsible for 85 percent of all side effect complaints made to the FDA, which range in variety from headaches to behavioral changes and seizures.

The majority of processed foods out there have sugar as the first ingredient. Often, it’s also the second and the third, as it is listed under different names, including dextrose, maltodextrin and malt syrup, to name only a very few.

Many health experts agree that sugar is equivalent to a poison: it’s a major player in obesity, type 2 diabetes, insulin resistance and heart disease. It has also been linked to depression, immune system suppression and a higher risk of certain cancers.

The form of sugar added to many processed foods and beverages is high fructose corn syrup. This type of sugar, usually derived from genetically modified corn, has an unbalanced glucose to fructose ratio, and therefore goes straight to the liver when it is consumed, where it is stored as fat.

HFCS is a culprit in nonalcoholic fatty liver disease, has been found to be highly addictive, and also poses the same other health risks as sugar.

Just another reason not to eat sugar… some manufacturers use bones bought in bulk from overseas (India is one region) to filter raw sugar cane and remove its natural brown color. These bones come from cows that have died due to what is deemed “natural causes,” which are boiled for several hours before they are packaged and sold.

So, it goes without saying that vegetarians and vegans who add sugar to their tea may be getting more than they bargained for.

Artificial colorings are manufactured from industrial chemicals. Two common base chemicals include antifreeze and petroleum. The research on many different colorings is quite worrying.

For example, Red 3 has been linked to breast cancer in humans, Yellow 6 has been associated by some research to adrenal and kidney cancers, and Yellow 5 was found to decrease sperm production in mice.

Furthermore, many of these dyes have been linked to behavioral issues in children and potential for severe allergic reactions.

Carrageenan, which is found in both conventional and organic processed food items, may seem harmless as it is a derivative of seaweed. However, it has been found that up to a quarter of the carrageenan on the market may be degraded, and even non-degraded forms may degrade within the body. Degraded carrageenan is linked to inflammation and intestinal problems, and is thought by some researchers to be a potential carcinogen.

A substance found in far more processed foods than you may think, MSG is sometimes hidden because it is called by another name, including yeast extract and hydrolyzed protein. In other instances, it is lumped in with many other chemicals as a “natural flavor.”

This is bad news, because MSG is a neurotoxin. Some complaints include eye damage, depression, headaches, numbness and disorientation. Because MSG can throw off the body’s glutamate receptors, it is a potential hazard to many systems of the body.

Shellac is a coating used on many different types of processed foods, for that shiny coating and texture you get on many candies, pharmaceuticals and supplements, as well as that bright shine on the apples lining supermarket shelves.

But, exactly what is this coating? Shellac is a substance derived from the extractions of an insect found in Thailand. When the shellac is harvested from the bark of trees, the insects themselves are often harvested too, and end up composing part of that shiny shell.

As the above-listed ten additives are just a small percentage of the most common, developing a taste for real, nutritious food that has a very short list of ingredients, rather than packaged products with long lists of ingredients, is definitely the wise choice for your health.