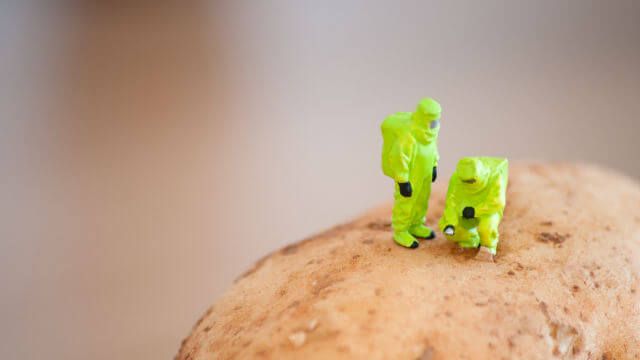 As if we didn’t have enough GMOs to worry about, a new one is reportedly on its way shortly: the FrankenPotato. You’d think that there would be little need to mess with the simple goodness of a potato – what would they possibly want to do to it?

Short answer: make it more difficult to bruise, and marginally safer to fry. No joke.

The new GMO potatoes, known as “Innate russet Burbanks,” were approved last November by the FDA. Manufacturer J.R. Simplot Co. is now just waiting for an FDA review of scientific data before they unleash their bruise-resistant spuds on the US.

To learn more about the GMO potato, Dan Charles, reporting for NPR’s “The Salt,” visited colleagues David Douches and Joseph Coombs at Michigan State University. There, Charles reported, conventionally-grown potatoes were given a “bruise test” inside a huge, rotating drum, alongside the new GM versions.

Not surprisingly, the FrankenPotato did not bruise as easily – this is exactly what it has had extra genes injected into it to do. Millions of dollars, and years of research and development… for less bruising.

This new GMO calls to mind the introduction of GMO “Arctic” apples, which as we reported, are engineered to not turn brown when cut. This modification, like the anti-bruising modification on the potatoes, offers no health benefits – simply shallow aesthetics.

But wait – there is one supposed health benefit of the FrankenPotato: it does not produce as many acrylamides when fried. While this may seem positive, as acrylamides are byproducts of high-heat cooking that have been linked to cancers, we have a completely free, ingenious solution that will reduce acrylamides in your potatoes even more: don’t fry them!

High-heat frying offers more health pitfalls than just acrylamides. Often, cheap, low-quality oils are used, which produce trans fatty acids when heated. Trans fats deserve no place in a healthy body, as they have been linked to obesity, heart disease, aggression and more.

So, we’ll keep our organic potatoes, and instead of frying, we’ll bake, boil, or stew them for maximum deliciousness. They may have an extra bruise or two… but when has that ever hurt anyone?

Like the great Joni Mitchell once said: “Give me spots on apples, and leave me the birds and the bees… please!” Let’s leave the bruises on the potatoes too, shall we?