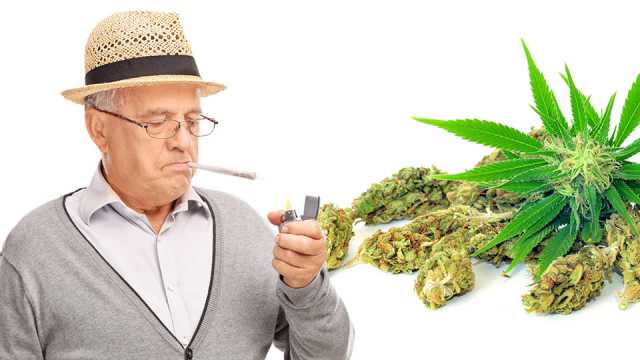 You’re never too old for weed — at least, that’s according to a new study that shows seniors are the fastest growing marijuana consumers. Published by researchers from the New York University School of Medicine and Columbia University, the study looked at a 2016 survey on drug use, and found some surprising results.

“The prevalence of cannabis use has increased significantly in recent years among U.S. adults aged … [over] 50 years,” the researchers concluded. Specifically, the study found marijuana use among people aged 50 to 65 has increased nearly 60 percent over the past decade, while usage among those aged 65-plus is up a whopping 250 percent.

While the research clearly shows cannabis users are far more diverse than the stereotypical college stoner, it also poses an interesting question of its own: why do middle aged and senior Americans love weed so much?

The answer is simple: chronic pain management, according to Colorado-based cannabis manufacturer Stratos. Company spokesperson Kate Heckman explained seniors are quickly shedding long-held skepticism over cannabis’ ability to treat pain just as well — if not better — than more conventional medicines. “I think they have tried a lot of pharmaceuticals and they’re looking to improve their quality of life,” she told CBS4.In fact, chronic pain relief is the single biggest reason patients request marijuana, according to a report released earlier in January by the National Academies of Sciences, Engineering and Medicine. Researchers don’t fully understand how cannabis helps relieve pain, though studies have shown it can help with nerve pain from injuries and surgery. Users have also reported cannabis helping with everything from arthritis pain to common headaches, cancer to muscle aches.

Although the science is somewhat hazy on just how well cannabis treats different kinds of pain, there’s one thing that’s increasingly beyond doubt: cannabis is far safer than opiate painkillers.
“Given the safety profile of cannabis compared to opioids, cannabis appears to be far safer,” Dr. Donald Abrams from San Francisco General Hospital recently said. While he pointed out opiate painkiller users should carefully consult with their doctor before considering transitioning to cannabis, the results can be worth it for some patients.
Plus, weed can be cheaper, too. This is a pretty big deal, especially when you consider that despite making up barely 13 percent of the population, seniors consume more than half of all opioids prescribed nationwide.

However, there’s more to weed than just dulling chronic pain. Earlier this year, a German study found marijuana may have some surprisingly positive, unique effects on the older brain. In particular, marijuana use might help reverse declines in cognitive performance caused by age. This includes potentially boosting memory performance.
It’s worth noting, however, that the study found evidence to suggest young brains have the exact opposite experience; that is, that cannabis can reduce memory function for younger users. So while the rest of us young pups are still trying to remember where the lighter went, mature age users can relax knowing marijuana might actually be doing their brains some good.

The mid-40s onwards is when life is supposed to be all smooth sailing, but this isn’t the reality for everyone. From mid-life crises to retirement anxiety, getting on in life can be pretty rough. This is reflected by the surging rates of drug and alcohol abuse among seniors; by 2020, the number of alcoholics over the age of 50 is predicted to double.
On the other hand, cannabis has been proven to reduce anxiety, stress and depression, while also improving overall mood. In short, weed basically makes people happy, and who wouldn’t want that?
So what do you think — did we miss anything? How else can cannabis help older users? Let us know in the comments below.