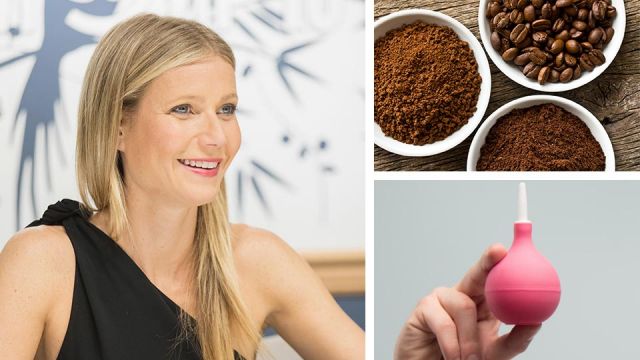 Gwyneth Paltrow’s lifestyle website “Goop” has often been criticized for promoting potentially harmful alternative health products. This time she’s promoting a device called the “Implant-O-Rama” for $135. This detox device provides a way to personally administer a coffee enema. Drinking coffee certainly has many well-documented health benefits. But what about injecting it directly into your colon? Are coffee enemas healthy or simply a hoax? And would you spend $135 to do one at home?

Coffee enemas are not a new concept in the alternative health world. In fact, enemas, have been used for thousands of years to help restore digestive function and improve overall health. Coffee enemas were first popularized by the late Dr. Max Gerson, born in Wongrowitz, Germany in 1881. Dr. Gerson made a name for himself by first curing his own recurrent migraine headaches. Gerson then began treating migraines in other patients by altering their diets. He soon found that his diet was not only curing his patients’ headaches, but also tuberculosis.

He later teamed up with famed thoracic surgeon Dr. Ferdinand Sauerbruch. Through diet and naturalistic practices, the doctors reportedly cured 446 out of 450 patients from skin tuberculosis. Gerson then went on to successfully treat heart disease, kidney failure and even cancer with his “Gerson Diet.” Today, coffee enemas are a vital part of the detoxification process at the Gerson Institute.

The jury’s still out on coffee enemas

For some people, the idea of injecting coffee into the colon may seem peculiar and even dangerous. On that note, those same people likely believe that Gwyneth Paltrow’s Goop website is irresponsibly promoting a “do-it-yourself” home enema device.

It’s hard to forget the backlash Paltrow experienced touting products like the jade eggs, meant to be inserted into the vagina to “help cultivate sexual energy” and “increase orgasm.” Or, the line of healing dust, claiming to do everything from increasing sexual pleasure to raising a person’s intellect.

Nevertheless, the jury’s still out on coffee enemas. So, let’s dig a little deeper (no pun intended) and see what caffeine in the colon can actually do for your health.

There are many, many fans of coffee enemas who say they’re an effective way to clean out the lower intestines and restore health. But cleaning out the intestines is not really their purpose. It’s not the enema that helps, though — it’s actually the coffee.

The purpose of coffee enemas is to remove toxins accumulated in the liver and to remove free radicals from the bloodstream. Originally tested on rats back in the 1920s, researchers found that the caffeine travels via the hemorrhoidal vein and the portal system to the liver. It opens up the bile ducts and allows the liver to release toxic-containing bile. Compounds such as theobromine, theophylline and caffeine in coffee dilate blood vessels and bile ducts. They also relax smooth muscles and increase the bile flow.

According to the Gerson Institute, anyone who suffers from a chronic degenerative disease or an acute illness can benefit from coffee enemas. They report to lower toxin levels, thus:

Is there enough evidence?

With so much practical evidence and purported health benefits of coffee enemas, it’s no surprise that the alternative medicine community has embraced “do-it-yourself” coffee enemas.

For people who know what they’re doing, Goop recommends the Implant-O-Rama. Yet, the idea of flushing toxins out of one’s body through enemas has been widely dismissed by some as pseudoscience. For example, the National Institute of Health claims there isn’t any convincing evidence that detox or cleansing programs actually remove toxins from the body or improve health.

Some also suggest that colon cleansing enemas, commonly used for detoxing, “may have side effects, some of which can be serious.” Harvard Medical School reports that detoxing is a “dubious practice.”  Like fasting, some researchers claim that “colonic cleansing carries a risk of dehydration, electrolyte imbalance, impaired bowel function and disruption of intestinal flora.”

For those who love the effects of coffee enemas, I say this: you can have too much of a good thing. The problem with a do-it-yourself home device is administering too many enemas on yourself. The National Cancer Institute (NCI) warns that too many enemas of any kind can cause changes in normal blood chemistry. “Chemicals that occur naturally in the body keep the muscles, heart and other organs working properly,” said the NCI.

Then there’s another issue with enemas, in general. Due to non-existing scientific data backing claims, they’re often discouraged by practitioners. That said, a study from the Institute of Digestive Disease and Nutrition at the University of Korea looked at the effects of coffee enemas in various patients. They conclude that coffee enemas don’t usually produce complications or side effects.

So then, which is it: healthy or hoax? Well, it comes down to this. For the inexperienced user, a do-it-yourself enema device may pose risks. I would leave it to professionals. However, for anyone who knows what they’re doing and has enjoyed a coffee enema or two in the past, then a home device may be just what you’re looking for. In the end (no pun intended) it’s a personal choice based on experience. What you hope to achieve health-wise, or even if you’re willing to pay $135 for a device intended to put coffee up your butt, will likely be your deciding factor.