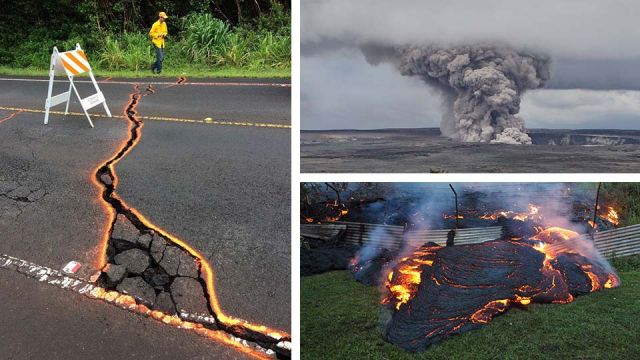 This past week, the Kilauea volcano erupted and has been blowing toxic steam and releasing lava. Kilauea is the world’s largest active volcano and it is located on Hawaii’s Big Island.

Geologists are now warning that a possible explosion of the summit could be the largest in over 100 years. In fact, the National Park which surrounds the caldera has been shut down indefinitely over fears of flying boulders the size of cars which can shoot out as fast as 125 m.p.h.

These fears are intensifying over the higher lava levels in the volcano drain. When the molten rock gets as high as groundwater levels, the pressurized steam can cause explosions, making the situation far more dangerous.

There have been confirmed reports of the volcano sending walls of lava into houses and cars. Additionally, there has been acid rain across the island. Sadly, officials are reporting that this could only be the beginning of the region’s problems if the eruption intensifies.

Thankfully, there have been no reported injuries thus far. That being said, here are 17 of the most shocking images that have been released.

1. A road covered in lava

Before and after images illustrate the damage caused by lava from Hawaii’s Kilauea #volcano: https://t.co/Qx5pDXA6aA pic.twitter.com/6mijDEiZPj

2. House is destroyed by lava

4. Lava in the main vent

Lava from a volcano on Hawaii’s Big Island has now destroyed 35 homes and other buildings. 1,700 people have been evacuated. Some residents of the island’s eastern corner were allowed to return home briefly, but told to be ready to leave “at a moment’s notice.” pic.twitter.com/1Zb9c9gPTX

5. Ground cracks from the eruption

#FastRepost from @usgs by @fastrepost_app ••• Kīlauea Volcano Update — From May 10, 2018, there’s been a pause in the eruption, but ground cracks are widening and new steaming areas have appeared. ▫️ 1️⃣At 7:43 a.m. HST. Geologist examines steaming crack in property on Ala`ili Road.  2️⃣At 08:08 a.m. HST. Geologist photographs a steaming crack about 50 meters (164 feet) west of Highway 130 in an area of earlier cracking. 3️⃣At 1:23 p.m. HST. New steaming area opens on Hwy 130. Cracks which crossed Hwy 130 yesterday are marked by the barriers in the distance. 4️⃣At 1:54 p.m., HST. Geologist inspects a crack that widened considerably in the past day on Old Kalapana Road. In other areas, new cracks have appeared along sections of Highway 130 in the past day, some with fume escaping. ▫️ ➡️Keep up to date with what’s happening in Hawaii at: https://go.usa.gov/xQRXj #usgs #science #volcano #volcanoes #hawaii #kilauea #kilaueavolcano #eruption #hvo #hawaiivolcanoesnationalpark

6. Lava flowing in Leilani Estates, a nearby town

Please pray for my island ❤️ I’m so torn by this. Seeing so many peoples lives change in an instant. Losing their homes and becoming completely displaced with no shelter or food breaks my heart. On the other hand the Island is alive and although I believe in God I do respect my Native Hawaiian Ancestry and the belief in the Goddess Pele and that this is her land, and we are only caretakers. Our island is still young and growing. ::: For those that are ignorant and mock those that live there; please be respectful. Many ppl who live there have lived there for generations and it is Home ❤️ ::: Mahalo @thewongone808 for using his resources to help the island that so many of us love ❤️ ::: One thing I do love about our culture is everyone helps each other. Natural disasters no matter what island we all help and stand together. #hawaiiismyhome #prayforpuna #heartbreaking #kilauea #ehawaiiekuuonehanaue #imua #hawaiitowashington #hehawaiiau #hawaii #maui #lanai #molokai #kahoolawe #oahu #kauai #niihau

Here’s what Hawaii’s volcano eruption looks like — by the numbers https://t.co/efSSQV0apO pic.twitter.com/9SEbqYSrLC

9. Lava flowing in a residential area

10. Smoke from the summit

Clear from Leilani all the way back to the summit. In the Leilani image, you can clearly see the path of the NE rift all the way back to Puu Oo. #halemaumau #earthquake #Hawaii #hvnp #hppa #volcano #Kilauea #lava #NEWSで妄想 #KilaueaVolcano #LeilaniEstates #travel #BigIsland pic.twitter.com/QozA1gku0o

– Over and out – Recent events in Big Island changed the way of the ongoing Kilauea eruption dramatically. The #61glavaflow is no more. The source of the lava, the #puuoo vent has collapsed, there is no lava to be seen anymore. In the same time the #halemaumau lava level drops dramatically which could lead to a major ash explosion. And finally the #leilaniestates fissures that opened up. Changing landscapes at its best. The topic my friend @erezmarom has written some articles about. Photo taken on a @paradisehelicopters flight with @erezmarom and @bruceomori . . . . . #bigisland #lava #eruption #hilo #kilauea #hawaii #hawaiivolcanoesnationalpark #paradisehelicopters #nakedplanet

12. Lava flows near a house

13. Helicopter shot of the lava flow in a residential area

14. Smoke from the eruption

Smoke From The Kilauea Volcano Eruption On The Big Island Of Hawaii. Pictures from @Volcanoes_NPS #Kilauea #Volcano pic.twitter.com/4pm3iOnw3k

Hawaii’s Kilauea Volcano has erupted. Molten lava bubbled up on paved streets and made its way near homes on the Big Island.

Nearly 1,500 residents were evacuated. No injuries have been reported. pic.twitter.com/rGRr5A7TJ3

16. Photo taken at the Volcano House Hotel nearby