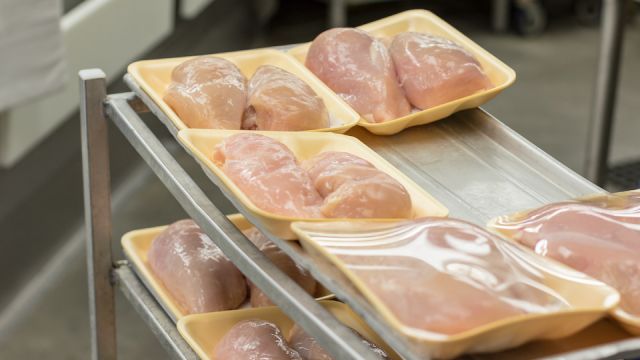 Here we go again, another poultry recall. This time it has hit Simmons Prepared Foods, who has recalled more than 2 million pounds of chicken in eight states due to possible metal contamination. So far, there have been no adverse reactions reported.

The U.S.D.A. issued a statement warning consumers to return or throw out products due to risk. The products were produced between October 21st through November 4th and were shipped to locations in Alabama, Arizona, Arkansas, California, Georgia, Minnesota, and Oklahoma, according to the U.S.D.A.

A company spokesman stated that most of the recalled poultry is in the form of bulk chicken products shipped to “industrial business customers.” Still, this is no reason to let down your guard if you have Simmons products in your fridge or freezer – best to take a look to be sure that you don’t need to take action.

A statement from Simmons noted that,

“We are working closely with regulatory authorities and affected customers to expedite this product recall.”

Poultry recalls so far in 2019

The latest recall of Simmons Prepared Foods joins two other major producers with massive recalls so far in 2019.

To some degree, we get what we pay for

There is some question as to whether food recalls are becoming more frequent or whether information on recalls is more widely accessible. The short answer is that both are happening. According to Professor Pamela Koch, a profession of nutrition and ecology at Columbia University – expedited widespread distribution of mass-produced food increases the risk of food recalls. As the volume of food produced and shipped gets larger, the chance of contamination grows as well.

Because Americans spend so little of their income on food when compared to other people in similarly large countries, producers must make more food faster. To satisfy the need for large amounts of food at low prices, food gets all mixed together in large batches and is distributed very quickly.

According to a study conducted by OnePoll,  the average adult in America spend $1,497 per month on non-essential items. This adds up to $18,000 per year. That’s a lot of money that could be going to putting higher-quality food on the table.

Spend more and eat local to reduce the risk

If you are serious about protecting your health and the health of your family, there are two critical things you can do. The first is to commit more of your income to quality food, and the second is to spend that money locally. As well known author Michael Pollan says, “Shake the hand that feeds you.” Doing so helps to elevate the quality of food you are consuming, reduces the risk of mass contamination, supports local farming and growing initiatives, and reduces your carbon footprint. Keep in mind that voting with your fork is a powerful tool to foster change.

It seems like a win, win don’t you think?