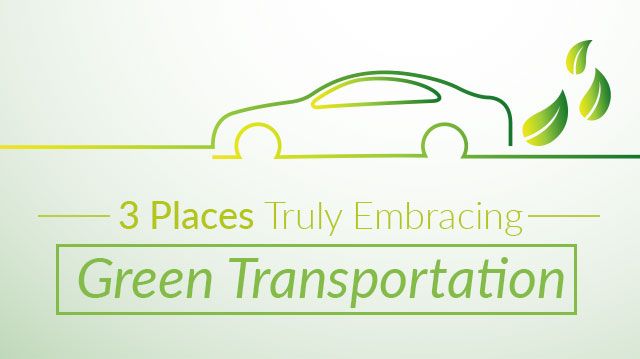 It’s becoming increasingly clear that climate change is a real and mounting threat to our planet’s health, and greenhouse gas emissions from transportation contribute significantly to this problem.

According to the United States Environmental Protection Agency (EPA):

It’s easy to see that all that driving to and from our destinations, as well as traffic congestion, is not doing our Earth any favors. Fortunately, more and more places are putting greater focus on green transportation. The following are three shining examples:

The city of Vancouver in British Columbia, Canada has plans to build a unique “transportation corridor,” known as the Arbutus corridor, over a nine-kilometer piece of land on the west side of the city.

The area, which is currently covered by unused railroad tracks, will be redesigned into a path for bikes, pedestrians, and public transportation. The Arbutus plans to be open for green transportation within two years.

“At this point, what is envisioned is passenger rail side by side with a greenway for walk, run, and bike.” Robertson also added:

“It is now public land. And that means that after a lot of patience, a lot of commitment on both sides of the table, we can proudly say that we have an agreement that will benefit all residents into the future.”

In Norway, plans are in place to build 10 two-lane bicycle highways across the nation. The goal is to encourage people to drive their cars less and bike more. The bike paths will link suburbs to cities, and according to Norwegian authorities, the government hopes that biking will account for 10 to 20 percent of transportation by the year 2030.

Norway has a plan to become a fully carbon neutral nation by the year 2050, and the bike highways are a big step in that plan. To add to the incentive, new low-emission guidelines for a variety of vehicles are being introduced, and vehicle taxes are going up.

While there are some obstacles to traveling across Norway by bike, including cold winters and hilly terrain, it’s nonetheless exciting. 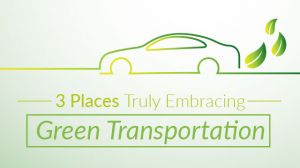 Copenhagen, the capital of Denmark, also wants to become carbon neutral. The city wants to achieve this goal even sooner: by 2025. One new initiative that has begun in Copenhagen is the installation of “smart” traffic lights, which give priority to bikes and public transportation.

“In short, these systems will ensure traffic that flows better so that as many people as possible can save time in the greenest possible way. It means that Copenhageners won’t waste time on their way to and from work and that is good business.”

Kudos to these three places for taking a stand on carbon emissions and encouraging greener travel! Will we soon see more of these types of initiatives in the United States? Here’s hoping!