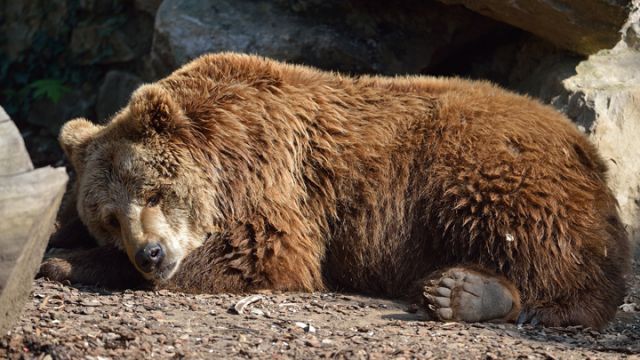 There’s a saying that goes, “you snooze, you lose.” That aphorism doesn’t apply to bears, however. They typically hibernate anywhere from two  to seven months of the year, depending on the weather and their location, but they don’t shed muscle mass or suffer ill-effects from their extended inactivity and lack of exercise.

Despite being the ultimate couch potatoes — at least over the winter months — bears do not experience negative effects from their sedentary lifestyle. If a person remained bedridden and immobile for even a fraction of that time they’d be subject to bedsores, kidney failure and stroke. But a bear can weather a season or two of slumber without so much as stirring for a potty break or a midnight snack.

Scientists and medical researchers are becoming increasingly intrigued by the physiology behind hibernation. How can a bear’s metabolism slow by 25 percent for such a long time, but with no adverse consequences? What happens to a bear’s platelet count as their heart rate slows to just 10 beats a minute? How can an animal as massive as a bear go without eating, peeing or defecating for several months at a time? And what can hibernation teach us about human health?

But first, what happens when bears hibernate? To begin with, hibernation is a genetically programmed response to both food availability and climate conditions. For instance, grizzlies in Alaska may start hibernating in the fall and not stir until spring, while black bears in more temperate regions may wait until the onset of winter, slumbering for just a couple of months.

Prior to hibernation, bears tend to stock up on food, often consuming three to four times their normal intake of calories and fluids. In fact, this fattening process is absolutely essential. Without it, bears would be either unable to hibernate or could suffer severe or even fatal symptoms during the hibernation phase. Interestingly, obesity is not a health issue for bears – they thrive by putting on weight.

During the dormant period, a bear’s metabolic rate typically drops 25 percent, their heart beats just eight  to 21 times a minute and they breathe about once every 45 seconds. Occasionally, some bears may wake and forage for food, but by and large, they sleep most of the time without needing to eat, drink, urinate or defecate.

The physiological and metabolic changes bears undergo during hibernation may hold clues into human health. Here are five areas researchers are focusing on.

1. Metabolism. Researchers are interested in a peculiar fact. Unlike other mammals, a drop in a bear’s metabolism does not lead to a significant change in their body temperature. Scientists hope there are clues in the bear’s physiology, which will help them develop treatments for stroke victims.

For instance, doctors sometimes seek to lower a stroke patient’s metabolic rate, but as Craig Heller, a biologist at Stanford University notes, “you can’t just pack someone in ice, because the body will fight to stay at a normal temperature.”

If researchers can understand how bears manage a lowered metabolic rate without their temperature regulation going haywire, then physicians may be able to induce a similar response to help stroke victims.

2. Osteoporosis. Immobility and lack of activity inevitably lead to the loss of muscle mass and bone density in humans. Bears, on the other hand, manage to maintain muscle and bone strength despite months of inactivity. Scientists believe that understanding how bears manage to recycle at least 25 of their bone during hibernation could help them find treatments for osteoporosis.

3. Diabetes. Bears gorge themselves prior to hibernation, but gaining 100 plus pounds of weight, mostly in the form of fat, doesn’t lead to metabolic conditions like diabetes. On the contrary, insulin levels and sensitivity appear to adjust themselves seasonally. As a result, bears maintain proper blood glucose levels despite different dietary habits and activity levels. Understanding how bears do this could provide insight and treatments for type 2 diabetes.

4. Alzheimer’s disease. As you might expect, bears and other animals that hibernate can be sluggish for some time following a long slumber. Scientists have identified a protein called RBM3, which helps brain synapses rebuild following hibernation. As it happens, humans also have this protein, but it is impaired in people with Alzheimer’s. Studying the role that RBM3 plays in restoring normal brain activity following hibernation could help physicians find treatments for victims of age-related dementia.

5. Cancer. Finally, some scientists believe that studying hibernation could provide insight into cancer. Dr. William Israelsen at the University of Texas Southwestern Medical Center notes that cancer involves a speeded-up metabolism, while hibernation involves a slowed-down one. His research is in its earliest stages, but Israelsen aims to investigate how hibernation may affect tumor growth.

Studying the hibernation patterns of bears and other mammals may have application in areas as diverse as space travel, sleep management and nutrition. For years, what happened in a bear’s den during hibernation was shrouded in mystery. But scientists are discovering valuable lessons by studying this powerful, amazing and graceful creature.