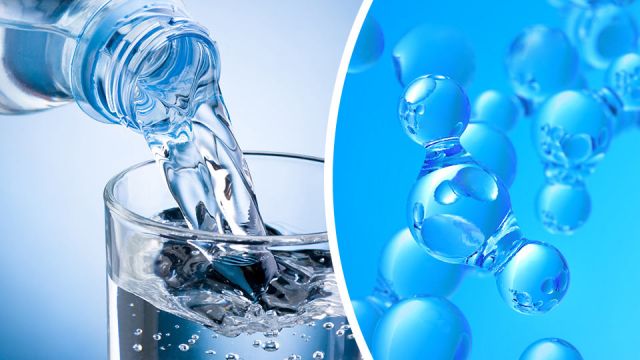 With the Western world rapidly turning its attention to alternative forms of treatment for a growing list of health problems, it’s unsurprising that a fair amount of bogus treatments have popped up. With disease-ridden Americans desperate to find solutions beyond side effect-laden pharmaceuticals and drugs, opportunistic money makers are often hasty to market their product as a “cure-all” before any of its benefits have actually been proven.

And so when I first caught wind of something called “hydrogen water”, I was understandably skeptical. How could pumping water with a little extra hydrogen gas turn it into a magical elixir of health?

What is hydrogen water?

Eager to put the health-related claims of hydrogen water to the test, I began to dig deeper. Hydrogen water is exactly as it sounds: through various means, machines are used to inject additional hydrogen gas into plain old water (remember, water is already composed primarily of hydrogen) to increase the baseline hydrogen content.

This, in turn, is supposed to instill additional health benefits into the water. It’s thought that the additional hydrogen in the water adds an anti-inflammatory and antioxidant component that helps to target chronic disease and get you on the road to recovery faster.

That’s all very well, but what about the science behind the claims? Feeling ever more skeptical, I delved into the research.

The proven benefits of hydrogen water

While much of the research on the health benefits of hydrogen water has been conducted in Japan, where it has long been popular within the alternative health scene, the results are actually surprisingly promising. Here’s just a snapshot of what the scientific literature suggests hydrogen water can do for our health.

It might seem a little hard to believe that simply injecting a little more hydrogen into plain old water would turn it into a Parkinson’s disease-preventing super-drink, but that’s exactly what the research suggests it can do.

A 2012 study published in the Journal of Medical Gas Research showed that drinking hydrogen water was able to protect against oxidative damage in the brain and prevent cognitive impairment associated with Parkinson’s disease. Another 2009 study found a similar result, concluding that “drinking H2-containing water may be useful in daily life to prevent or minimize the risk of lifestyle-related oxidative stress and neurodegeneration.”

Yet another randomized placebo-controlled study showed that drinking one liter of hydrogen water every day for 48 weeks “significantly improved the total Unified Parkinson disease rating scale (UPDRS) score of patients with Parkinson’s disease.” While these are all relatively small studies, the results suggest that hydrogen water may very well protect your brain against neurodegenerative disorders like Parkinson’s.

A 2016 study published in the American Journal of Translational Research found that molecular hydrogen, which is the same element added to hydrogen water, was able to reduce oxidative damage and protect cells against inflammation. This means that by adding more hydrogen to water, it is able to address the root cause of rheumatoid arthritis and help alleviate symptoms.

Metabolic syndrome is a major precursor to a wide range of cardiovascular disorders, including obesity, insulin resistance, diabetes, hypertension and dyslipidemia. Luckily, hydrogen water may just provide a viable solution for keeping metabolic syndrome at bay.

A 2010 study published in the Journal of Clinical Biochemistry and Nutrition found that eight weeks of drinking between 1.5 and 2 liters of hydrogen water was able to dramatically decrease markers of metabolic syndrome in 20 at-risk subjects. Drinking hydrogen water was shown to increase superoxide dismutase, a powerful antioxidant enzyme, decrease thiobarbituric acid, a common precursor to metabolic syndrome, and improve patient’s cholesterol ratios.

Studying for exams? Trying to learn new skills at work? Hydrogen water can help with that!

A 2009 study published in the Journal of Neuropsychopharmacology found that “continuous consumption of hydrogen water reduces oxidative stress in the brain, and prevents the stress-induced decline in learning and memory.” This also means that by preventing oxidative stress in the brain, drinking hydrogen water could protect your brain against other neurodegenerative disorders and keep your mind sharp.

In a study that examined the effect of drinking hydrogen water on mice with Duchenne muscular dystrophy, a debilitating muscle disease, researchers found that hydrogen water helped to prevent muscular degeneration by increasing production of the master antioxidant glutathione peroxidase and by preventing excessive body mass gain.

Another study found that athletes who drank hydrogen water before exercise were able to lower blood lactate levels (which is what gives your muscles that “burn” after a workout) and improved exercise-induced decline in muscle function.

Is it worth drinking hydrogen water?

It’s fair to say that before I did the research I was pretty darn skeptical about hydrogen water. But there’s actually a surprising amount of research out there, and what I’ve read suggests that it could provide some very real health benefits.

So is it worth drinking? There’s only one way to find out — give it a try and see whether you reap the health rewards! Be sure to let us know how you get on in the comments below.