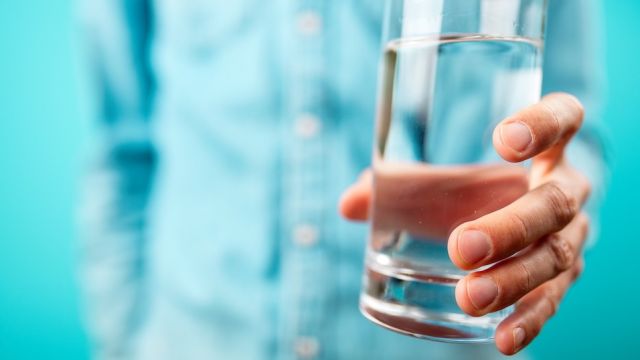 Since the human body is made up of roughly 75 percent water, it’s commonly recommended that you stay well-hydrated throughout the day. Let’s face it; without this elixir of life, humans couldn’t survive more than three to four days. But when does too much of a good thing turn into a bad thing? Here are the subtle and not so subtle ways your body warns you; you’re drinking way too much water.

Water is vital for the human body…But, here’s a subtle sign you’re over-hydrated; your pee is clear. According to the Mayo Clinic, the concentration of pigment in your urine indicates how hydrated or dehydrated you are. Hydrated pee varies in color, depending on your water intake. Water dilutes the color in urine. So, the more you guzzle that water, the clearer your urine will appear. Deep amber color, obviously, means you’re dehydrated. If your pee is clear most of the time, then that’s a sign you’re likely drinking too much water. Moreover, if you’re running to the bathroom often and your pee is clear, then you may want to cut back on the water.

You’re peeing too much

If you’re drinking eight cups of water over a 24-hour period, then it’s normal to pee six or seven times per day. Even up to 10 times is normal, according to Medical News Today — if it doesn’t interfere with life. While certain factors such as age and bladder size could affect how much you pee, so can drinking excessive amounts of water. If you have no underlying conditions and you’re peeing more than 10 times per day, then you’re probably drinking way too much water. Keep in mind, caffeine and alcohol both have diuretic effects and will increase your need to go.

Under normal circumstances, excessive amounts of water can be easily eliminated from the kidneys, according to the MSD Manual. However, overhydration can occur if you’re drinking more water than your body actually needs, thus leading to low sodium levels in your blood. This can cause your body to retain fluid in your lower legs.

You don’t suddenly gain pounds of fat overnight, suggests Katherine Zeratsky, R.D., L.D., for WebMD. “Water weight is real for some people.” If you’re drinking more water than your body needs, and it can’t manage to flush out the extra water, then it will cause weight gain, also known as “water weight.” But what you eat, any additional beverages you drink throughout the day, work habits, and overall health typically play a role in the amount of water you drink. For instance, after a very salty meal, you’ll naturally crave more water that your body needs. All that extra salt will cause water retention, which in turn causes extra pounds on the scale. This is also referred to as bloating. Unlike chronic water retention, which indicates a problem with kidneys or hormones, bloating is only temporary.

Water typically retains throughout your body, between blood vessels or in the tissue, and will pool in the lower legs, fingers, and toes. Interestingly, your body also may store water if you’re dehydrated. When you don’t drink enough water, the ratio between the salt and water gets unbalanced. As a result, your body hangs on to any extra fluids until the balance is restored. The best way overall to deal with water weight, is to start moving and drink up to flush that sodium out of your system. Just don’t go overboard with how much you drink.

You’re drinking water even when you’re not thirsty

Here’s a mind-blower; maybe you’ve been doing this water thing all wrong. Instead of regimenting yourself to drink eight to 10 cups of water a day, how about only drinking when you’re thirsty? Popular rules that say you need x-amount of cups per day may not be based on actual evidence, suggests research. A study published in the Proceedings of the National Academy of Sciences looked at how the brain controls the sense of thirst and the reflex that pushes you to swallow. It found that the brain actually reduces your swallowing reflex once you’ve had enough water. This means that the act of drinking water, even when you’re not thirsty, forces you to override your brain. It basically, stops your instinct. Apparently, this biological override is a way to stop you from drinking too much.

The study began with nineteen people exercising in a room. They developed a thirst after losing about one percent of body weight in water from sweating. Researchers then placed them into an MRI scanner. Participants hydrated themselves by drinking water, while their brains were monitored. They were asked to continue drinking, even when they were no longer thirsty. As drinking the water became less enjoyable, the participants’ brains began to regulate their thirst. It became harder to swallow as the motor cortex, which controls swallowing, worked harder to make it possible.

So, forget about sticking to a strict regimen of forcibly drinking excess amounts of water. Instead, drink when you’re thirsty. Your brain and body know instinctively how much you need. The key is to listen to them.