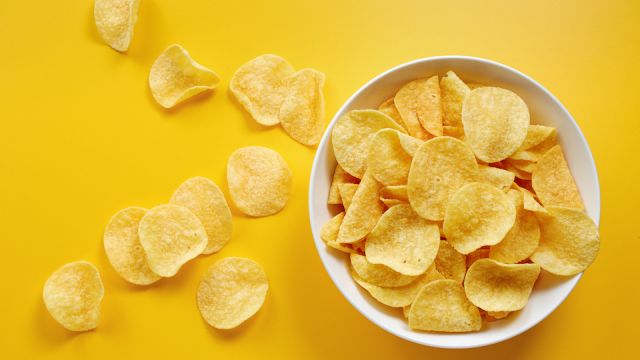 Sodium bisulfite is a chemical used in toilet bowl cleaners. It is also a chemical added to portato chips, crackers, and other crunchy snacks to help extend the shelf life and bleach any discoloration. I don’t know about you, but I’m not exactly thrilled about my snacks sharing an ingredient with the stuff I put in my toilet.

You probably were horrified in 2012 when the secret behind Starbucks Strawberry and Creme Frappuccino (and a few other items on the menu) reveled. Though this was the controversy that sparked mass interest, the use of cochineal beetles (small white bugs that release a bright red color when crushed) in food dye is far from a new or limited practice. In fact, these you’ve likely eaten loads of these beetles throughout your life, as they have been used in the food and makeup coloring for hundreds of years. Though it is technically considered a safe, natural ingredient by the FDA, it’s a little disconcerting to realize that you’ve been chowing down on crushed beetles.

If you’ve ever eaten a gummy bear or a bowl of jello, you have also eaten pigskin. Collagen is the primary ingredient that gives gelatin its jelly-like properties. Enough said.

Cellulose, also known as virgin wood pulp or sawdust is a starring player in your prepackaged shredded cheese. It coats the cheese and keeps it from clumping up. The USDA has ruled that any product with more than 3.5 percent cellulose content cannot be recognized as nutritionally sound. Of course, there are worse things you could be eating, since, technically cellulose is a plant product, but cheese should be made up of well…cheese, right?

L-Cysteine is an amino acid made from human hair or duck feathers that is used in dough conditioners to soften mass-produced bread. Around 80% of L-cysteine is made from human hair, and 20% is made from duck feathers. Though it may be unsurprising to hear of another nasty ingredient in something from McDonalds, it could be a little shocking to find out that it’s not just their meat that is loaded with unsavory parts. The Baked Hot Apple Pie and Warm Cinnamon Roll on their breakfast menu are made with the duck feather L-cysteine. It is really a good idea to just avoid McDonalds entirely at this point.

Let’s face it, it is virtually impossible to avoid every nasty ingredient in packaged food. Especially if you start browsing the FDA’s Defect Levels Handbook, a detailed list of the acceptable number of rat hairs, bugs, and worms, etc. that are legally allowed in your food. However, there are ways to cut down on your intake of unknown nastiness.

Eat locally – whenever you can, strive to enjoy locally sourced ingredients. They are usually fresher and free of harsh preservatives that extend the shelf life of packaged food.

Grow your own – When it comes to fruits and veggies, grow your own whenever possible. You don’t have to have a massive plot of land to start including homegrown produce into your diet. Utilize your porch, patio, or balcony and experience the power of container gardening.

Cut down on packaged foods – It’s pretty clear that there’s not really anything good about heavily processed, packaged foods, especially when you consider the secret ingredients lurking within. Not to mention processed sugar, refined wheat, and the lack of any real nutritional value.

Remember, these ingredients are technically safe, just not exactly savory so don’t stress if you eat some shredded cheese or drink something with red dye. However, these ingredients are easy to avoid by shredding the cheese yourself or avoiding sugary drinks in the first place. Just make smart choices regarding your health and eat fresh and organic whenever possible.