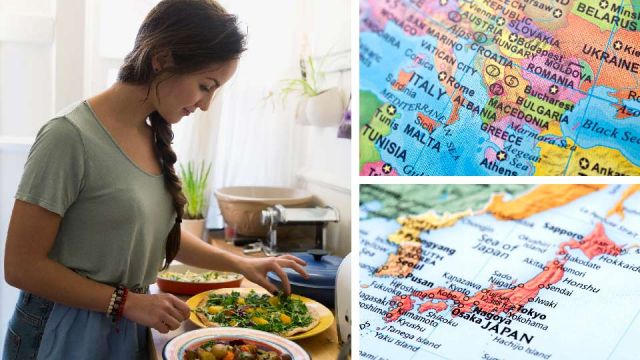 A person needs a little madness every once and awhile, or else they’ll go crazy. I’m paraphrasing words from a character in the novel “Zorba the Greek,” which seem to capture a mindset that many inhabitants of Ikaria, Greece seem to have. They relish the taste of wholesome food, they love to dance and they are intoxicated by life.

The residents of Ikaria know how to enjoy themselves and this seems to have a very positive impact on their health. They routinely live well into their nineties (and beyond), they don’t suffer chronic diseases the way most Americans do, and rates of age-related dementia are exceedingly low.

What’s their secret to a long and healthy life? Well, researchers investigating so-called Blue Zone areas (regions where people tend to live long and healthy lives) have distilled some trends having to do with diet, physical activity and social relations, which seem to be key to both mental and physical well-being. Let’s take a look at some of the lessons from Dan Buettner’s book, The Blue Zones – 9 Lessons for Living Longer from the People Who’ve Lived the Longest.

The residents of Ikaria, Greece, are not counting calories, pouring over the nutrient content on packaged goods and denying themselves all manner of foods. Instead, they’re feasting on locally grown fruits and veggies, sauteing wild-caught fish in heart-healthy olive oil, enjoying a daily glass or two of organic wine, and enhancing meals with antioxidant-rich herbs and spices.

People from Blue Zones seem to follow one simple rule (which they are not even aware they are following): “If it comes from a plant, eat it. If it is made in a plant, don’t eat it.” That quote comes from health advocate Michael Pollan, but it very much aligns with the Blue Zone mindset.

Here are several other guidelines that can help you get in a Mediterranean frame of mind:

The evidence is overwhelming that residents of Blue Zones have a much lower risk for getting “the diseases of civilization,” which include diabetes, cardiovascular disease and cancer. Undoubtedly, a large part of the reason for that appears to be their diet, which consists almost exclusively of locally grown organic foods. These are naturally rich in health-protecting phytonutrients, antioxidants and anti-inflammatory compounds.

The lessons here go beyond any one food (or food group). In sum, the closer you eat to the way nature intended, the better your immunity, mood and physical health are likely to be.

Okinawans are another Blue Zone group that does very well in terms of health and longevity. Residents of this Japanese island eat a mostly plant-based diet too, which includes stir-fry veggies, sweet potatoes and goya (a fruit-like vegetable loaded with antioxidants).

But there are a few other reasons Okinawans frequently live to 100:

By the way, older Okinawans are particularly fond of tending to their gardens. These small plots not only supply medicinal herbs, but the activity itself provides beneficial exercise and stress relief. The fact that Okinawan seniors have a venerated place in society doesn’t hurt either — and it’s a stark contrast to the way older people are warehoused in our culture.

Blue Zone residents aren’t using stationary bikes or tracking their heart rate on their Fitbits. But they are getting lots of beneficial physical activity in the form of daily walking, gardening and dancing.

Here are a few of the ways Blue Zone residents stay fit without going to a gym:

In our culture, people are always trying to pack more in, be more productive and beat the clock. But residents of the Blue Zones seem to appreciate life is not a sprint, it’s a marathon. As a result, they are famous for taking naps, enjoying a mid-afternoon happy hour, and getting at least eight to ten hours of immune-boosting sleep each night.

Living life in the slow lane appears to have its advantages. People feel less urgency to complete daily tasks, they are more attuned to nature’s rhythms, and cooperation with others instead of competition takes precedence. No wonder people from the Blue Zones seem to take things with a more light-hearted attitude. As a result, stress-related diseases appear to be the exception rather than the rule in Blue Zone countries.

Blue Zone residents tend to stop eating before they are full. In contrast, Americans always seem to be stuffing food in their mouths, which is probably a symptom that they are lacking other forms of nourishment (spiritual, psychological and sensual).

But there is little doubt that many of the foods our society devours in mass quantities are loaded with calories, but bereft of nutrition. Residents from Blue Zones, on the other hand, have made fiber-rich foods like beans and whole grains a central part of their diet.

These foods are loaded with nutrients that are packed within cellulosic fiber. As a result, meals made from these ingredients are digested more slowly, which help trigger feelings of satiety. It’s no surprise, then, that obesity, metabolic disorders and inflammatory conditions are rare among Blue Zone residents.

There’s a lot to be said for specific foods — such as olive oil, eggs and fatty fish — that many centenarians and Blue Zone residents are prone to eat. But there’s a compelling case to be made that the lessons from the Blue Zone regarding health and longevity go well beyond individual dietary or lifestyle changes. Instead, there a broad wisdom in the Blue Zone approach to life: the closer your food and lifestyle choices are to nature, the more nature will sustain you.